Market Update: Reading Between the Lines

After the resurging positive sentiment of past weeks, markets were this week once again showing signs of fragility – the mood was decidely ‘risk off’. We could characterise this as growth scepticism, or more wariness that inflation will require even stronger and swifter central bank policy tightening before it is effectively squeezed out. Last week’s move towards monetary tightening from the European Central Bank (ECB) – even though long anticipated – provided the necessary headlines.

Market Update: Reading between the lines 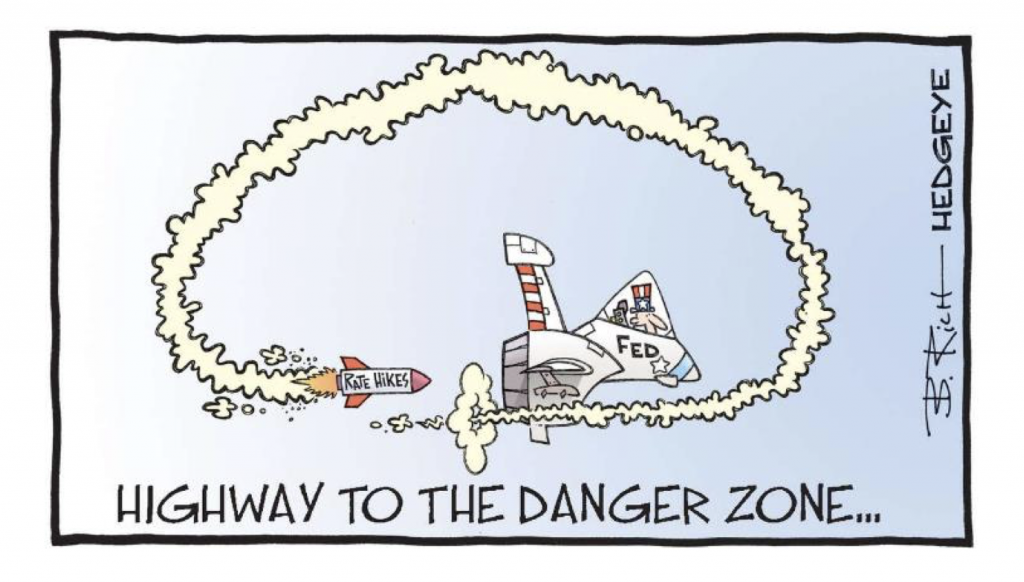 After the resurging positive sentiment of past weeks, markets were this week once again showing signs of fragility – the mood was decidely ‘risk off’. We could characterise this as growth scepticism, or more wariness that inflation will require even stronger and swifter central bank policy tightening before it is effectively squeezed out. Last week’s move towards monetary tightening from the European Central Bank (ECB) – even though long anticipated – provided the necessary headlines.

One way we anticipate market actions is to examine the different signals from different asset classes and markets, and consider what future scenarios might explain those moves. Earlier this week we saw pressure building in different areas. Oil prices returned to levels reached immediately after Russia’s invasion of Ukraine. Fixed income government debt yields moved higher, with general corporate and lower credit yields rising faster. Market-implied inflation (Breakevens) expectations also rose in the US, although less obviously. The combination signalled expectations of higher interest rates – and over a longer period than expected before.

The simplest rationale for this would be that central banks might need to maintain higher rates than previously thought, to dampen demand growth down to match reduced global production capacity, and therein contain inflation. That would also see credit spreads (that extra yield that weaker corporate borrowers have to pay versus the government) rise because bankruptcies would probably increase as weaker companies are unable to service their debt at higher yield levels.

The ECB ‘tightened’ its monetary policy on Thursday, and we cover some of this in an article below. Interest rates were unchanged, but ECB President Christine Lagarde “committed” that rates will rise by 0.25% at the next meeting in July and that bond buying (quantitative easing) will also end (although there was no mention of actual bond sales, or quantitative tightening). Thereafter, Lagarde indicated the ECB’s readiness to raise rates by 0.5% in September (with no August meeting) and probably by another 0.5% in October. From the current overnight market rate of – 0.5%, most economists expect the year-end traded rate to be around +0.75%.

Still, most commentary had it that the ECB was being more hawkish than expected. Real yields rose more sharply than those in the US, but the euro nevertheless weakened. The reason for this possibly lies in the way that most government euro assets are not risk-free. Due to the inherent structural weakness of the European Monetary Union, they carry a credit risk component (Italy and Greece) and the credit spread over less risky credit (like Germany) widens as nominal rates rise. Lagarde acknowledged this instability by talking of a new “spread control” tool, but nobody thinks there is ECB Governing Council consensus on this.

The lack of an ECB rate hike now does pose the question of “why not this month?” – that is rather difficult to answer, especially if the ECB is so certain of rate rises next month. Yes, it may wish to keep to previous statements, but its inflation forecasts keep going up and (the ECB’s own economists say) all the risks lie towards higher inflation. It is like heading towards a cliff edge with a broken speedometer and promising your passengers you won’t brake too sharply.

There may be reasons to think the ECB’s laggardly stance (pun intended) is intentional because most believe the underlying issues are ‘global cost push’, and that the policy that matters comes from the US Federal Reserve (Fed). In which case, policy compression is already underway.

US inflation data for May released on Friday worried some investors by being slightly above expectations (with monthly core consumer price index (CPI) inflation still rising at an annualised rate of 7%). As mentioned before, US ten-year Treasury yields had returned to above 3% this week. After initially retreating after the release of the inflation data, yields resumed their upward path. Perhaps investors are yet to be convinced inflationary pressures may have peaked.

Yet, we increasingly observe several good reasons to believe goods prices are being constrained – just look at the company earnings guidance for this quarter. US retailers Target and Walmart told markets about their over-stocking and, this week, Intel said computer hardware sales had turned disappointing. The pandemic has affected chip-related manufacturers especially. We devote a separate article this week to exploring just how cyclical the chip industry currently feels, and what the turn from supply famine to feast in this sector tells us about a possible balancing out of the post-pandemic supply-demand hangover.

Meanwhile in the UK, DFS revealed it was ‘sitting’ on a lot of sofas that are proving hard to shift. Financial market veterans will feel they have seen this story repeatedly down the years, with DFS moving from one administration episode to another. This perhaps indicates where the fragility in markets emanates from. As we pass from over-demand to over-stocking, some firms will face a sharp squeeze just as rates start to bite. From that perspective alone it appears entirely justified that credit spreads in Europe and the US have risen back to recent highs. This does not necessarily hint at a major economic downturn, but merely the self-cleansing process capital markets normally afflict on the weakest, when money is scarce and looking for the most efficient application (a factor suppressed over the past decade of plentiful cheap money).

So, while it may seem markets have headed back to the bearish sentiment of mid-May, from where we sit, things seem to be a little brighter. China’s sharp policy actions have stabilised sentiment and as we’d hoped, the virus impacts appear to be waning quite quickly now – not just in China. Perhaps that puts some renewed pressure on commodity prices, but the fear that world trade would face another supply chain squeeze now seems less likely. Indeed, China’s equity markets and credit spreads have been moving in the opposite direction to the western world. Given they were one of the focuses for previous investor bearishness, the turnaround is to be welcomed. And, as noted, the margin squeeze on goods sellers due to the spending pressures that have hit households from their fuel and energy bills is also equivalent to a reduction in goods price inflation pressure.

The current upswing in market risk premia (as stock markets fall there is a higher earnings potential – a bit like the relationship of yields rising, when bonds prices fall) seems to us to be more of a straight risk aversion – as more risk-averse investors find the exit – rather than about an actual worsening of the global macro picture.

Of course, this risk aversion might find a justification if energy prices are forced to rise more, or some other external threat emerges. But absent those shocks, this week’s wobble is probably just that. As there is little in terms of historic precedent of post-pandemic normalisation periods combined with a major war between one of the largest energy exporters and one of the largest food exporters, perceived uncertainty levels are high. But even while that is so, resilience levels and activity potential for the global economy have not been in as promising a state for a long time – as has the resilience of systemically important financial institutions. 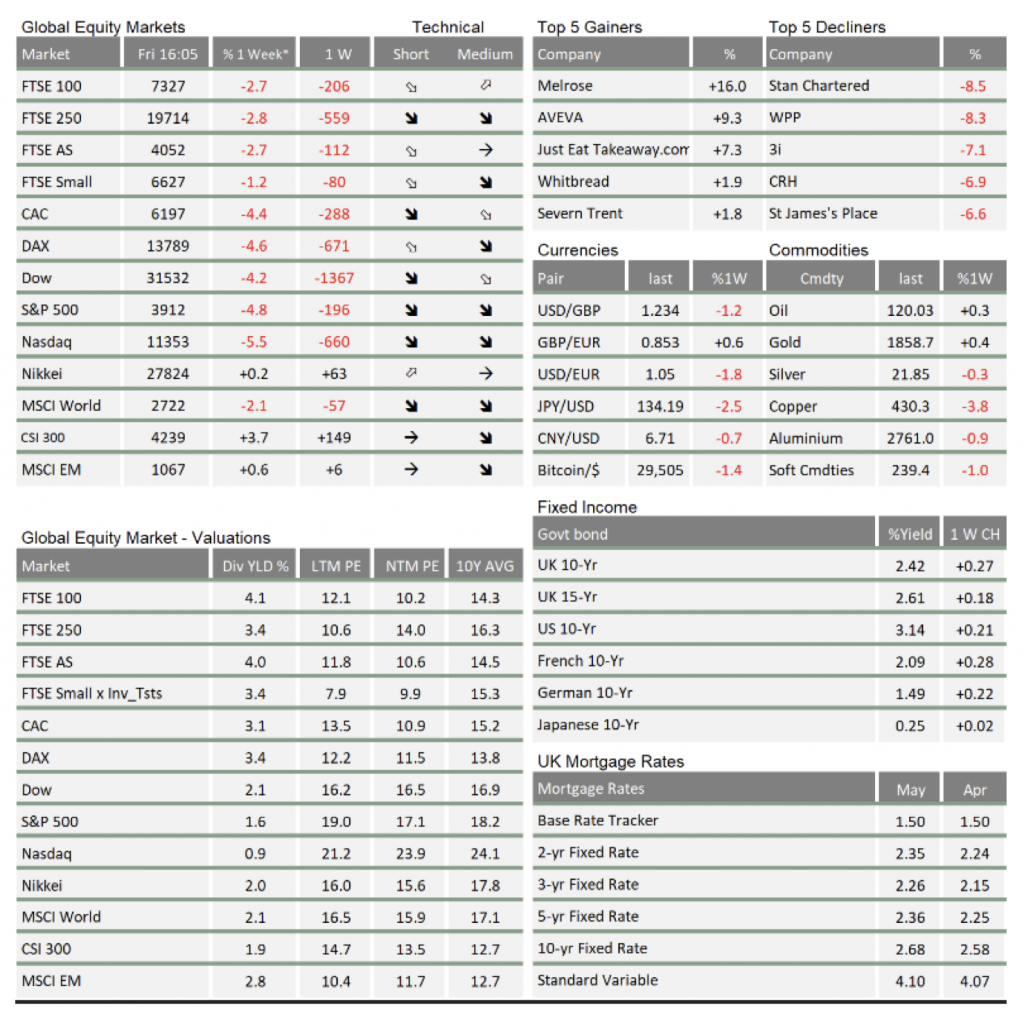