As central banks around the world were busy reasserting their authority and credibility as the guardians of monetary stability, the previous week’s stock market wobble turned into a fully-fledged rout last week. The growth concerns that preoccupied investors morphed into fears that central banks have become so determined to stop inflation from embedding itself that they are prepared to accept that proceeding with monetary tightening countermeasures may indeed lead to a global recession. 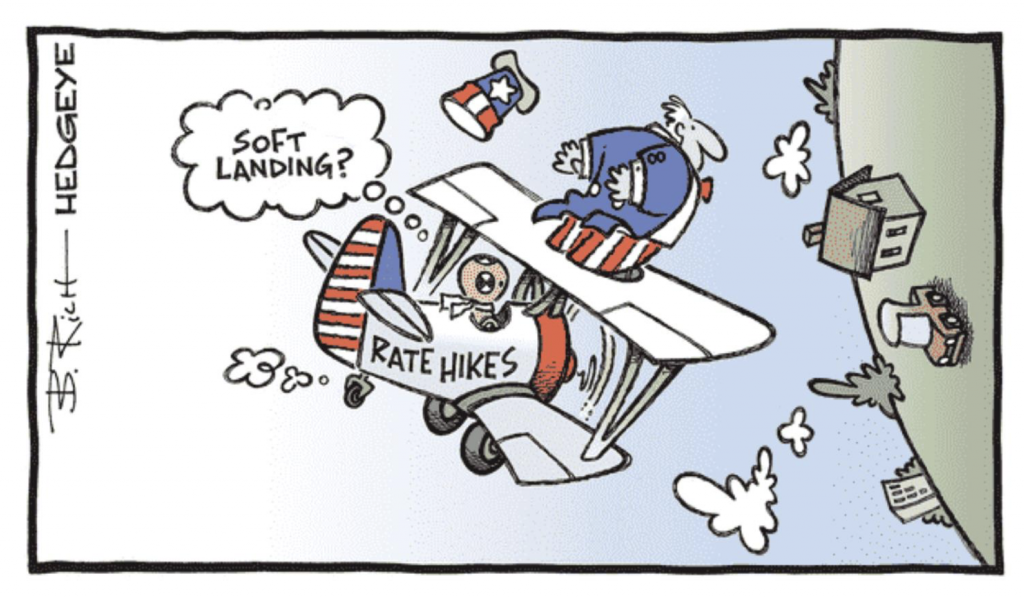 As central banks around the world were busy reasserting their authority and credibility as the guardians of monetary stability, the previous week’s stock market wobble turned into a fully-fledged rout last week. The growth concerns that preoccupied investors morphed into fears that central banks have become so determined to stop inflation from embedding itself that they are prepared to accept that proceeding with monetary tightening countermeasures may indeed lead to a global recession.

This must seem extraordinary to the general public, but we should not forget that the pandemic period has been like no other, and offers very little precedent – and therefore no sort of playbook – of how to handle the post-pandemic ‘hangover’ period. We may have reached the point where the disease is slowly having less and less direct impacts on our lives, but we have also now entered the economic period which is all about coming to terms with the ‘medicinal’ side effects.

Individuals, and also our politicians, have become used to central bankers being very effective trouble-shooters. It is them, rather than the political class, that has protected us from the big economic fractures we fear. In the UK, while the Global Financial Crisis and Brexit felt bad, the actions of the Bank of England (BoE) and other central banks kept us away from experience a fate similar to the 1930s depression that followed the crash of 1929.

We will never know what would have happened had we not had the biggest dose of central bank support ever to protect us from the economic pain inflicted by the pandemic. However, we can see that the medicine itself, huge monetary injections, has almost certainly contributed to global inflationary pressures in a not insignificant way (the others being the supply chain disruptions, consumers’ short term preference shift for ‘things’ away from services, and the post-pandemic shortage of labour).

The Bank of Japan’s (BoJ) timetabled meeting produced no change. The European Central Bank (ECB) held an ad-hoc meeting to discuss the consequences for policy of their strong signal that policy rates will be raised. Now that sounds nasty but, in actual fact, compared to the rate rising central banks, ECB and BoJ provided some good news for markets.

It may seem the world’s central banks are in a synchronised tightening mode, but that’s not the case throughout. Both the BoJ and the People’s Bank of China are actually engaged in forms of easing. This week, the BoJ committed to unlimited bond purchases (effectively new quantitative easing), a stance reiterated at its Friday meeting. Neither Japan nor China engaged in the massive monetary easing of 2020-2021. Indeed, both have had quite anaemic monetary growth over the period. This may well be a factor in why their (and Asian) growth levels had been well below potential, but now they are able to ease policy rather than having to tighten.

The Asian economies are significant in global growth terms, and we think western markets’ fearful disposition rather misses what will probably be a positive beyond their immediate shores. Both have faced cost-push pressures from the cost of oil and gas which has raised domestic prices, but their inflation levels remain much lower than in the US, UK and Europe.

We talk of central bank credibility in the articles below and, again, there is good news in how the markets had anticipated the Fed’s move. While this resulted in major bond volatility in the run up to the rates decision meeting, we make the case that ‘long-view’ real yields may be reaching a plateau if perhaps not exactly a peak. In the short term, the fact that central bank guidance is once again working is certainly being read as them having re-established their credibility as the keepers of monetary stability – which can be argued is half the battle won already.

But equity and credit markets will remain at risk of the potential for western central banks having to restrain demand even more should energy market capacity (supply) continue to be constrained or even shut down. This suggests a notable change in the narrative, as the cost of energy is increasingly the single biggest driver of elevated prices, after supply shortages of goods are increasingly meeting demand levels (we mentioned the developing microchip glut last week).

Similarly, on the pressure points of construction, lumber prices in the US have now been declining for over two months while other raw material markets have seen a small but marked decline in prices since May. As a result, energy prices remain the weak spot for higher risk assets. Over the course of the week we have observed an increasing negative correlation between oil prices and stock market movements – as oil prices fell by more than 5% on Friday, equities in western markets – at the time of writing – had a much-welcomed up day.

Therefore, it was not good news that Gazprom slowed the Nord Stream pipeline flow to less than half of its capacity, ostensibly because of technical ‘compressor’ problems – which supposedly cannot be replaced because of current trade sanctions. The flows through the pipelines which traverse Ukraine also remain low and the usual build-up of gas storage for the winter heating period has now – conveniently for Russia – been halted, as the chart below shows. 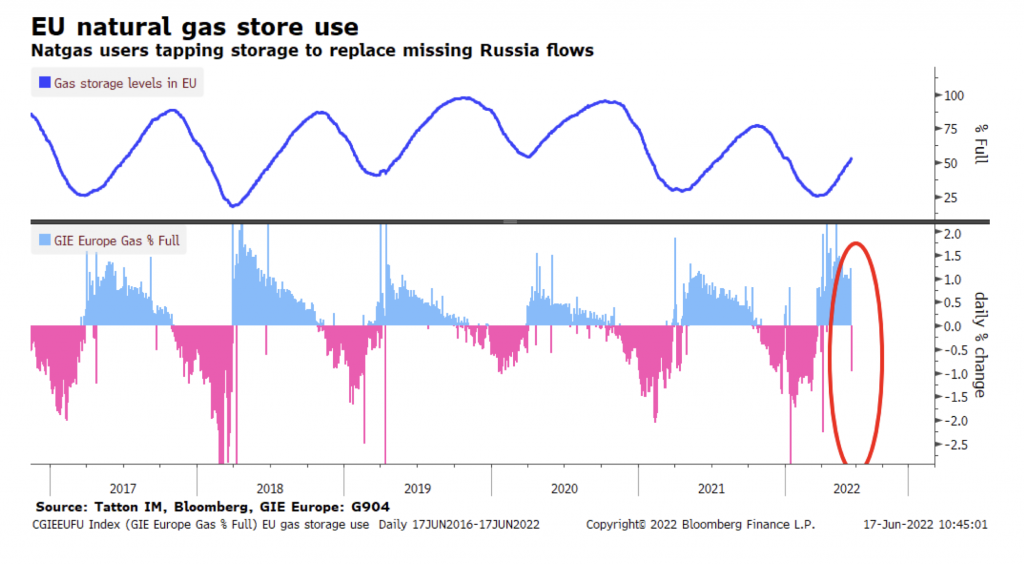 The Russian leadership perhaps det–cts a softening of Western resolve amid economic pressures and can see their leverage growing. As such, we should be prepared for more tactical pressure, designed to delay the help for Ukraine.

Global economic data is beginning to show signs of weakening (such as today’s data for May US industrial production, which showed a slight decline month-on-month). That is leading to renewed worries about equity earnings growth, and analysts are probably in the process of trimming expectations for the second half of the year as well as for this current quarter. However, a large amount of pain has already been taken, in the form of higher long-term rates, wider credit spreads for higher risk corporate loans, and equities trading at a significant discount compared to last year.

Long maturity bond yields are unlikely to shoot up further in the face of such data, but credit spreads may still be vulnerable to further widening (see also our separate article about the outlook for bonds). On the credit side, cosmetics veteran Revlon filed for Chapter 11 bankruptcy on Tuesday, and such events do not help perceptions of credit stability, even if such incidents are company-specific. Investors may worry about more defaults around the corner, but current corporate distress remains very low while many companies still have substantial liquidity.

Meanwhile, the flow of new corporate bond issuance has not just slowed, it has become a drought, a situation which often leads to quite sharp bounces when the available returns are higher than normal. High corporate bond yields may start to look attractive soon. We think equities may lag any bond rally initially, but the rise in yields has driven the fall in valuations, meaning that potential analyst downgrades could be offset.

Meanwhile analysts have not yet embarked on downgrades. The bottom-up guidance has been mixed, but US earnings per share growth for the next 12 months has been stable around a healthy- ish 6%.

In summary, this tells us that while last week’s wobble did indeed turn into a rout this week, we continue to see this as part of post-pandemic hangover volatility, rather than the onset of a major shift in the long-term economic outlook. However, what has become clearer this week is that should the lack of energy supply continue to cause problems, or get worse, the broader economic outlook may yet get worse before it gets better. On this note, the near 10% drop in oil prices towards the end of the week has been most welcome!