Market Update: Plan B or not Plan B? That is the question

Equity markets bounced strongly on Tuesday. The catalyst was a flip in the coronavirus narrative that went: “the new variant is as contagious as the very first, but much less damaging. It confers some immunity. Triple-boosted vaccines work well on it, at the same efficacy as on the other variants. Greater contagion will not overwhelm systems, but will help the world live with the disease.”

Market Update December: Plan B or not Plan B? That is the question

Equity markets bounced strongly last week. The catalyst was a flip in the coronavirus narrative that went: “the new variant is as contagious as the very first, but much less damaging. It confers some immunity. Triple-boosted vaccines work well on it, at the same efficacy as on the other variants. Greater contagion will not overwhelm systems, but will help the world live with the disease.”

This viewpoint held sway for a few hours. However, last week, Boris Johnson announced Plan B. The government can’t take the risk that a spike in COVID cases leads to a very bad health outcome for many, particularly with the National Health Service stretched because of the festive season. In the government’s defence, we are still awaiting scientific conclusions of the risks caused by the Omicron variant, and arguably the outcome will have to come from real world data, meaning observing the consequences of the spreading virus. One may also argue that some of the preventative measures bring the UK more in line with measures adopted in other countries, even if this does not guarantee those measures are the right ones.

In this respect, the thinking seems to be: “we’ve done it before, so we can do it again”. However, we can detect a difference: restrictions over the past two years have been accompanied by support for those directly damaged by the imposition. There was no such help announced this time.

When risk assessment is narrowed to one potentially bad outcome, avoidance of that outcome dominates the policy. The complexity of risk in other areas is underplayed. The City of London is a good example of the changes in behaviour. Professor Jesse Matheson, a University of Sheffield economist, has been working on the big shifts in social geography wrought by working from home.

He leads a study conducted before last week’s announcement and shortly to be published. With commuters spending an extra day working from home instead of in the office: “City centres stand to lose £3 billion in 2022. This decrease will be concentrated in a few very dense centres; for example, the City of London will experience a spending decrease of 31.6%, and central Birmingham will experience a decrease of 8%. Some of this spending will be realised in the residential areas where these workers live, but some may be lost altogether.”

For bars, pubs and restaurants, it’s been a reasonable start to the festive season, with footfall down 30% from 2019 levels, according to a couple of City of London bars informally polled this week. Evenings are better than lunch. Some of that is a long trend. Younger workers appear to be starting their ‘commute’ around 4pm rather than 7am, and they’re not going to the office. That might help the bars hold up, less so daytime coffeeshops.

However, the longer the health risks posed by city life persist, the more apparent will become a crucial variable in economic activity: rents. Landlords have huge vacancy rates now and there’s almost no opportunist prepared to bet on a return of the office worker. Unfortunately, because landlords are always reluctant to lose the revenue and are not happy to agree lower ongoing rents for current tenants, the market won’t clear quickly, with downside risks lingering. At the onset of the COVID crisis, we (along with many others) mulled over the structural shifts the virus may accelerate. Relaunching IT investment (which has already occurred in many economies) was one of them, but now we are accustomed to altering working practices and therefore cityscapes. Indeed, we can observe a current pattern of the 9-5 office becoming less relevant

Transition phases tend to create winners and losers. Currently, the losers appear to be getting little support. However, it will be crucial that the transitional process is managed by public authorities, not just by an ad-hoc reaction to (by nature) random virus mutations.

Further afield, China had altogether different concerns this week. As the country still runs a zero- COVID policy, Omicron has had very little impact. Consequently, attention is fixed on the domestic economy and the woes of its property sector. More news of the winding down of floundering property giant Evergrande was counterbalanced by authorities signalling supporting for the rest of the economy. Needless to say, this backing is incredibly important to stem contagion into other sectors, even if it is likely that more fiscal support will be needed.

Evergrande missed a US dollar-denominated interest payment, while the shares of smaller rival Kaisa Group Holdings were suspended after it failed to meet its deadline for a USD loan repayment. At the same time, the media reported Evergrande restructuring plans were taking shape. Offshore debt and bonds are all set to be included in the restructuring, although questions persist over the treatment of domestic liabilities. It remains to be seen whether domestic bondholders receive their payments, and what will happen for many thousands of people who put down payments on yet-to-be-deposit creditors. On the face of it, the restructuring of a company in default sounds like bad news. However, markets have had low expectations for a good outcome for Evergrande for a long time – at some point, the unavoidable – a restructuring process – had to occur. It could be, however, that the pain is borne more by overseas bond investors. For the wider market, most investors will be content if there is no further contagion to healthy companies in the sector, or to the economy as a whole.

In that respect, it’s comforting that Chinese USD high yield bond spreads fell back over the week, rather than rewidening beyond previous levels. Importantly, there is a political acknowledgement that support may have to be forthcoming. The People’s Bank of China lowered its reserves requirements for banks, freeing up an estimated CNY 1.2 trillion (USD 188 billion) of cash which is now available for loans. The tone of the Politburo has also turned more accommodative for economic support next year. Quite often, once an ‘orderly’ restructuring process starts, the low point in markets has been reached, even if economic consequences persist.

In the US, the Federal Open Markets Committee meets next Wednesday, 15 December. Virtually everyone (including us) assumes bond purchases will be tapered more rapidly than the schedule announced in November. The end date for new purchases will most likely be in March. This then brings the expectation for short-term interest rates to then be raised. Steven Blitz of TS Lombard tells us that the market may well expect a rise from 0% to 1% by the end of 2022 (currently the expectation is for a rise to 0.5%).

The US Treasury will be the major borrower in the coming months, having put its schedule on hold as it waited for the cessation of ‘debt ceiling’ arguments from both sides of the US Senate. On Thursday, the Senate voted to allow Congress to raise the debt ceiling with a simple majority vote, ensuring government employees will not face being laid off over the holidays.

There’s been much talk about what level of Fed rates is the right equilibrium rate for the US economy. Currently the market thinks it is about 2%, but a number of commentators have warned that it could (or should) be higher. We think they could be missing something. The inflation-linked bond market gives us a view of where real short-term rates will be in the long-term. For over a year, the real short-term rate has been priced between -0.1% and +0.5%, and at 0% for the past three months. During all the talk of tapering, it has hardly moved.

The Fed’s goal is to achieve full employment with stable inflation. It has stopped believing it knows precisely what either level is, but it now thinks it undershot both measures in the past. During this time, investors who took absolutely no risk still made money. We think the Fed now believes that those investors should probably not lose out, but neither should they benefit. A 0% real rate over the long-term would do that. This means the terminal nominal rate will be wherever the inflation rate settles. Therefore, in about five years’ time, we should expect short rates to be between 2% and 2.5%. They may not get there much earlier.

Dear reader, lest you think we have become cheerless, please read on. This has been a reasonable year for investors, and we think next year will be pretty good too. We invite you to read our outlook for 2022. 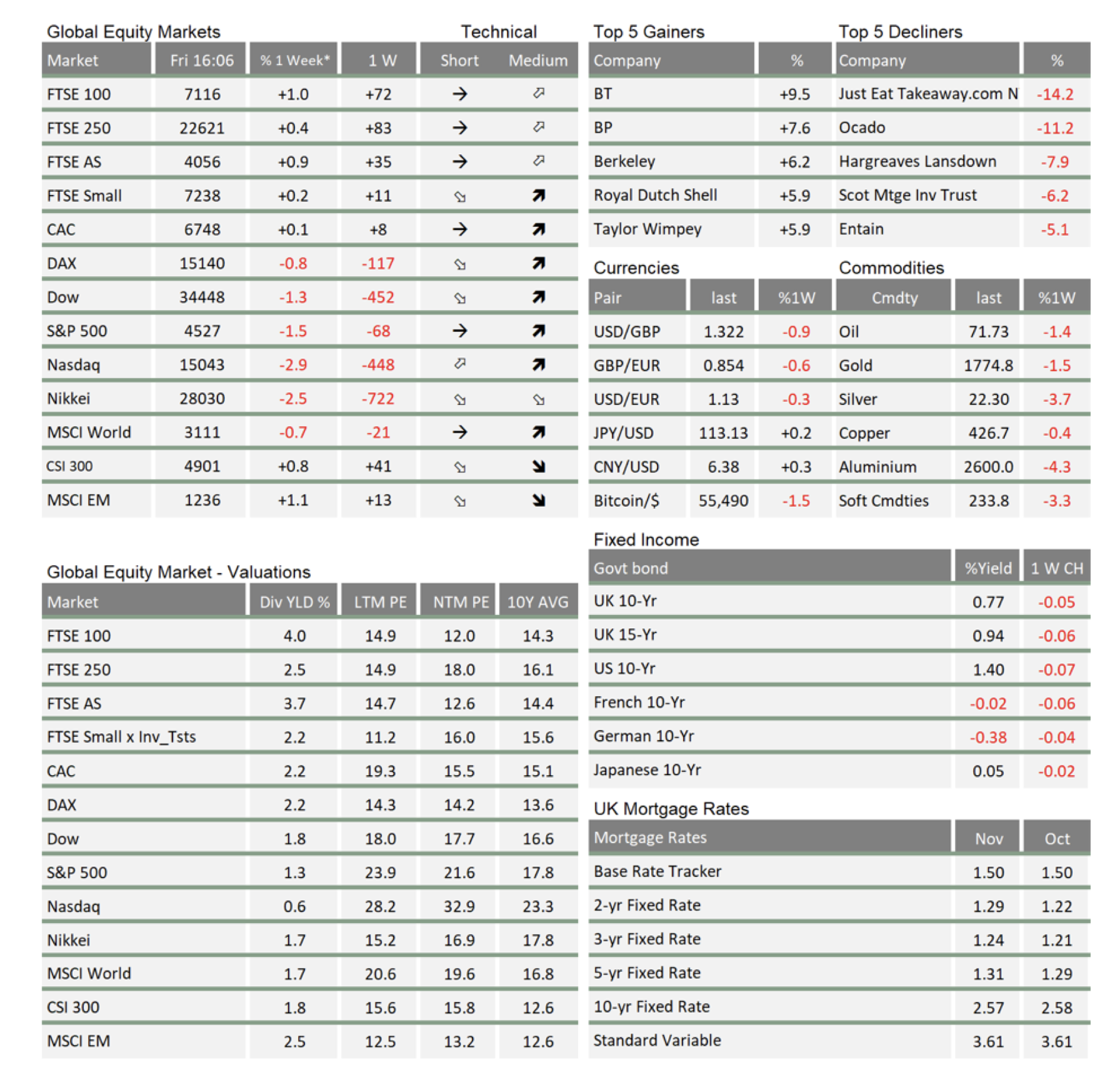