Global equity markets enjoyed a Santa rally in December as optimism returned to the global trade outlook, policies from central banks remained supportive and investors took the view that ultra-low interest rates would remain in place for longer…

Global equity markets enjoyed a Santa rally in December as optimism returned to the global trade outlook, policies from central banks remained supportive and investors took the view that ultra-low interest rates would remain in place for longer.

Both the UK election result and the US-China Phase 1 trade deal fuelled optimism further whilst offering far more clarity for businesses as they plan for 2020 and beyond. Whilst this could be a welcome gift for the global and domestic economy, it’s important to remember that nothing is a “done deal.”

December provided a positive return, capping a strong calendar year for the UK equity market. The market rallied sharply on news of a Conservative majority government mid-December, boosted by the prospect of an end to the political impasse and a period of relative stability.

The value of Sterling proved volatile throughout the month. The pound gained ground ahead of the UK General Election and reached a seven-month high of US$1.31 on increasing optimism of a Conservative majority win. Sterling then rallied sharply on election night, with the confirmation of a majority government pushing Sterling to US$1.33.

The US equity market reached fresh highs in December to cap one of the best years of the past decade. Stocks were buoyed by talk of an interim trade deal between  US and China which would see Washington reduce tariffs and Beijing increase purchases of US farm goods. Performance was also boosted by better than expected economic data and the US Federal Reserve’s projection that interest rates would remain on hold throughout 2020.

Adding to the upbeat mood was data from the US Department of Labour, which revealed that US jobless claims had fallen by 13,000 to a seasonally adjusted 222,000 in the week ending 21 December. Payrolls jumped by 266,000 (the most since January 2019) as wages topped estimates while consumer sentiment increased to a seven-month high. The stronger-than-expected data bolstered hopes for a pick-up in global economic growth.

European equity markets finished the year strongly and recorded their best annual return in a decade as markets were buoyed by the combination of a convincing UK general election result and news of a Phase One trade deal between US and China.

Against this backdrop, investors were happy to adopt a ‘risk-on’ stance with ‘cyclical’ parts of the market (companies whose performance is linked to the business cycle) outperforming ‘defensive’ areas.

In economic news, December’s eurozone Composite PMI reading improved slightly to 50.9 (50.6 in November). The IFO business climate indicator, which measures confidence among German executives also improved to 96.3 in December from 95.1 in November.. These positive economic developments, along with easing US-China trade tensions drove the German Bund (viewed as a ‘safe-haven’ asset) price lower and pushed the yield to a seven-month high of -0.19%.

Exports to the Euro Area – which have been in decline for some time now – also look to be bottoming out as some of the headwinds begin to fade (e.g. decreased chances of a ‘no-deal Brexit’, easing trade war rhetoric). This means there is a reasonable chance that the consensus GDP growth of around 1% could prove to be a little too conservative. Christine Lagarde’s first meeting saw the European Central Bank leaving policy unchanged, while noting somewhat less pronounced downside risks. 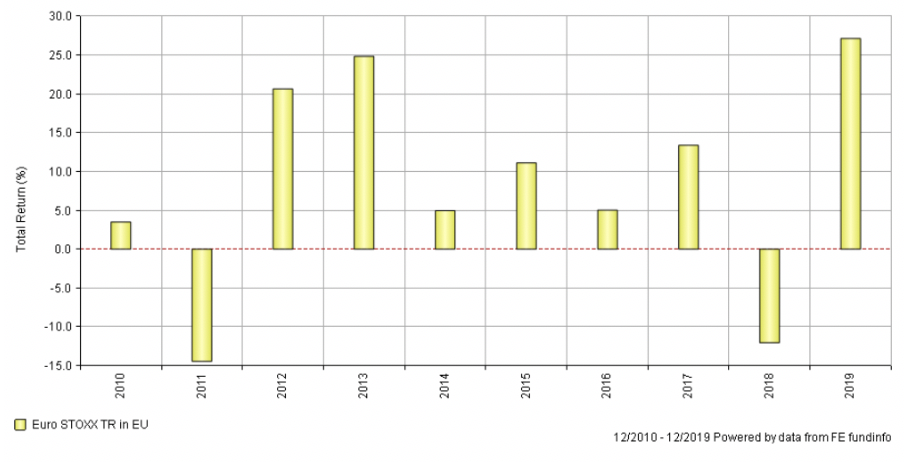 Asian equity market performance was positive in December as the US and China negotiated a Phase One trade deal, which is expected to be signed on 15th January.

As anticipated, the US has agreed to delay indefinitely the new tariffs that were set to take effect in December on $160bn of Chinese imports and reduce the tariff on $120bn of Chinese imports to 7.5% from 15%. This reduction represents the first tariff rollback since the start of the trade war in July 2018. At the same time, China has agreed to increase its purchases from the US.

Against this backdrop, the Chinese equity markets were among the best performing markets in the region in December. China’s economic data for November came in ahead of expectations, showing a broad improvement across industrial production, industrial profit and retail sales.

Elsewhere, the Indian equity market had a volatile month as the Reserve Bank of India surprised the market negatively by keeping interest rates on hold and sharply reducing its economic growth forecasts for the full year (2020) by 110 basis points to 5%. However, the market performed better over the second half of the month on the back of improved US-China trade relations.

In Japan, the equity market also responded positively to the US-China trade deal announcement, ending the month higher. Japan is a major trading partner for both parties in the dispute and its equity market continues to be influenced by short-term reactions to overseas news flows.

Stocks also reacted positively to a series of business restructuring announcements by major companies during the month. Meanwhile, the Bank of Japan continued to leave monetary policy unchanged and refrained from taking interest rates deeper into negative territory.

Emerging equity markets registered broad gains during December to cap off a successful year for the asset class as investors responded positively to news that  US and China had reached agreement on Phase One trade negotiations. Higher commodity prices, a weaker US dollar and lower interest rates – they were cut in Brazil, Mexico, Russia and Brazil – also provided a positive backdrop for investors.

The gradual fading of sanctions risks, higher oil prices and lower interest rates combined to ensure Russian equities finished the year well, helping Russia to top the leader’s board as the best performing equity market in 2019, including the developed world.

However, unlike its peers in Brazil and Mexico, the Bank of Russia hinted that they may take a breather after delivering five consecutive interest rates cuts with the latest 0.25% reduction taking the rate down to 6.25%.

Not to be outdone, Turkey’s central bank lowered its benchmark interest rate by 2%, taking it down to 12% from 14%. While the move supported local equities, the Turkish lira fell in value (down 3.4%), being the only emerging market currency to decline in December. Firmer gold prices and a spike in mining stocks bolstered equity markets in South Africa.

December brought some seasonal cheer to financial markets. However, for bond investors returns were more mixed. Even so, 2019 will be remembered as an unexpectedly strong year of returns for nearly all areas of the bond market.

Optimism over better economic data, a potential US/China trade deal and a decisive general election win for the UK’s Conservative Party helped to spur overall sentiment but led to a sell-off in more interest rate sensitive parts of the bond market.

As the market’s appetite for risk increased, government bonds were typically sold in favour of assets with a perceived higher return potential, such as equities and high yield bonds. The subsequent rise in government bond yields (which move inversely to prices) acted as a headwind to total returns for investment grade (IG) corporate bonds.

However, the more positive tone to sentiment meant that credit spreads (the premium companies need to pay to borrow over government bonds) for these bonds narrowed. Despite this month’s weakness, sterling IG markets, have delivered their highest calendar year return since 2016. Euro IG returns in 2019 were the highest since 2014.

With the equity markets rebounding strongly in 2019 there seems further cause for optimism as we head into 2020 with many of the headwinds experienced over the last 18 months appearing to ease over recent months. In addition, the “Goldilocks economy” with moderate economic growth and low inflation looks set to persist providing a strong backdrop for the equity markets who will have a keen eye on the US election with the pro-business republican party looking to secure a second term.