To some investors it will seem the old investor adage of ‘Sell in May and go away’ has once again proven correct, especially when the US S&P500 fell within touching distance of that bear market threshold of -20% last week. However, what makes this particular market correction different to others experienced since the pandemic is that it has disproportionally affected those risk assets considered safe havens when economic growth prospects faltered – namely US tech mega caps and other tech names quoted on the NASDAQ. 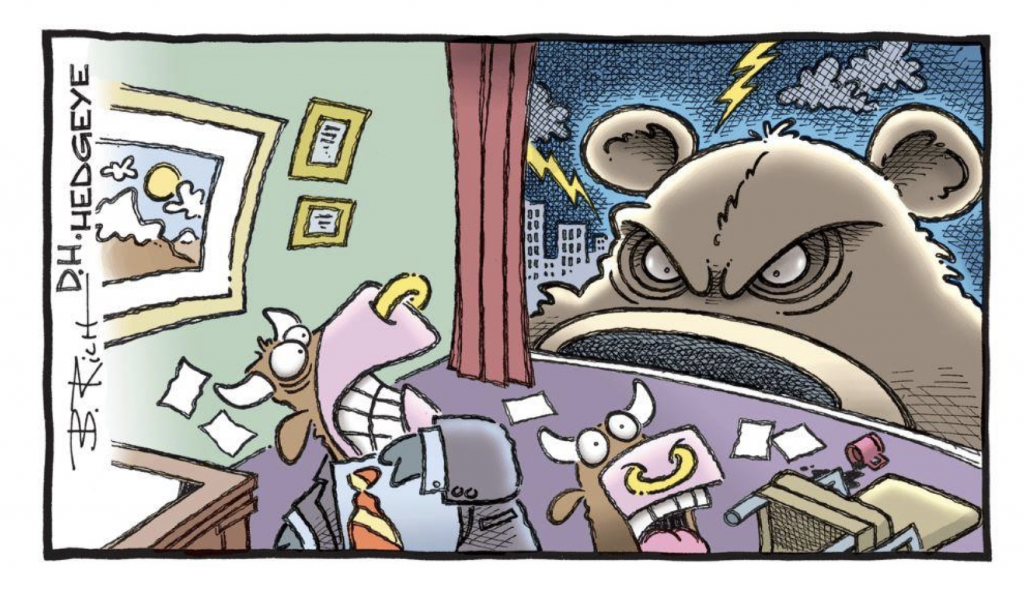 To some investors it will seem the old investor adage of ‘Sell in May and go away’ has once again proven correct, especially when the US S&P500 fell within touching distance of that bear market threshold of -20% last week. However, what makes this particular market correction different to others experienced since the pandemic is that it has disproportionally affected those risk assets considered safe havens when economic growth prospects faltered – namely US tech mega caps and other tech names quoted on the NASDAQ.

For such a long time, the prospect of a weak economic growth environment would mean buying large-cap US tech because their secular growth potential (not dependent on general economic growth), would overwhelm any concern over falling earnings in near-term cycles. However, it seems the early post-COVID period has changed this dynamic. During lockdowns, cash flooded into the hands of small investors (especially in the US), who, stuck at home, spent their time trading stocks. They picked what they perceived as promising and thereby created their own winners. That meant tech stocks and a number of cryptocurrencies including Bitcoin, Ethereum and Dogecoin.

Now, with the end of government funded payments, and the arrival of inflation triggering the cost-of-living crisis, excess cash from wages has turned into a deficit while the cost of borrowing has gone up. Perhaps unsurprisingly, the value of those assets has been heading back towards their cost. 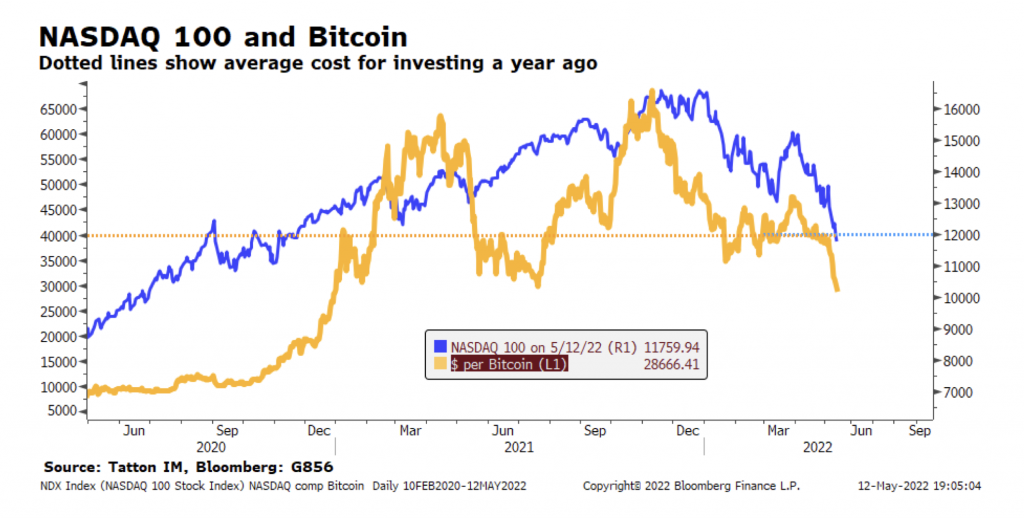 As the chart above illustrates (with Bitcoin levels on the left-hand axis and the NASDAQ 100 level on the right) this week both instruments moved below those prices, which coincided with a sharp acceleration in downward pressure on both. Cryptocurrency holders suffered a particularly rude awakening this week, as the sharp falls shattered dreams of making a living or even getting rich from their trading activity.

Through the reporting season for Q1 2022, several of the mega-cap tech firms have been telling investors that the change in the economic backdrop means that – due to their size and variable revenue base – they are no longer confident of their ability to simply outgrow such headwinds. For example, Netflix was hit a couple of weeks ago as subscribers cancelled subscriptions to unburden household budgets to pay for more essential goods. This week, ride-hailing app Uber told investors they too would be cutting costs. This seems significant; Uber’s incremental cost base is now subject to the same inflation pressures as elsewhere.

Liquidity, or the perception of financial comfort (perhaps in the form of unrealised profits for some), may be drying up. We should therefore expect the travails of the US stock market to have quite an impact on consumer confidence and ultimately in their willingness to spend. Given how rapid this has unfolded over the past few weeks, the US Federal Reserve (Fed) may feel that its tightening of monetary policy is at last having the desired disinflationary impact by reining in gushing demand.

These dynamics have already manifested themselves in the bond market, which are indicating that inflation expectations have slipped back. We observe this from real returns on bonds (yields after inflation expectations) having remained broadly stable, while fixed rate yields have moved sharply down. That probably signals good economic news in the longer-term, and also good news for risk asset markets, which after the recent declines no longer look overvalued as their earnings yields have risen relative to bond yields.

At the beginning of April, when markets recovered from the shock of the invasion of Ukraine, we said markets felt priced for perfection. Now they appear priced and braced for the onset of a global recession. Those recession fears centre largely on the input price inflation from energy and food supply constraints that are expected to force central banks to increase rates further, thereby choking off the post-pandemic economic recovery. In other words, market sentiment has likely slipped from one extreme to the other.

Yes, inflation readings are high, but they are no longer increasing. High energy prices are also having the effect of bringing idle production capacity of oil exporting countries back online. Only this week volume figures from Iraq showed far higher export levels than OPEC’s caps would have us expect. The ‘invisible hand’ of markets and economies is doing its job. More crucially, if current market pessimism stems from the cost-of-living crisis caused by the energy price shock, by autumn this concern may well be confined to those parts of Western Europe particularly dependent on Russian gas.

Of course, we have written before about China’s difficulties in handling its COVID policies of late. Not only has it lowered Chinese consumer demand, but also productive capacity, which might bring supply issues back to the forefront. While uncertainties persist, it appears China is coming back online quicker than anticipated and having been reluctant to offer Western-style economic support during the main pandemic period, China at last appears willing to embrace a much looser and accommodative policy stance.

This leaves the fallout from the bursting of the latest tech (and crypto) bubble to contend with. Those who remember the aftermath of the dot-com bubble in 2000 will know consumer demand dropped enough to cause a recession. There is some risk of this, although history has a tendency to rhyme rather than repeat. We entered this period with a surplus of savings and a surge in activity as people were keen to return to normal spending habits they had to resist during the pandemic years. Should the setback in the tech and crypto markets subdue consumer demand, and also take the heat out of central bank rhetoric, then we may have reached a notable turning point for a decline in 2022’s bond market headwinds.

All in all, the various economic data points of the week suggest there is some cause for optimism that the ‘bear scare’ may be running out of fuel. Not only have market valuations reached more ‘normal’ levels but company valuations are also returning to more normal metrics based on facts and figures, rather than merely hopes, believes and self-enforcing herd mentalities. 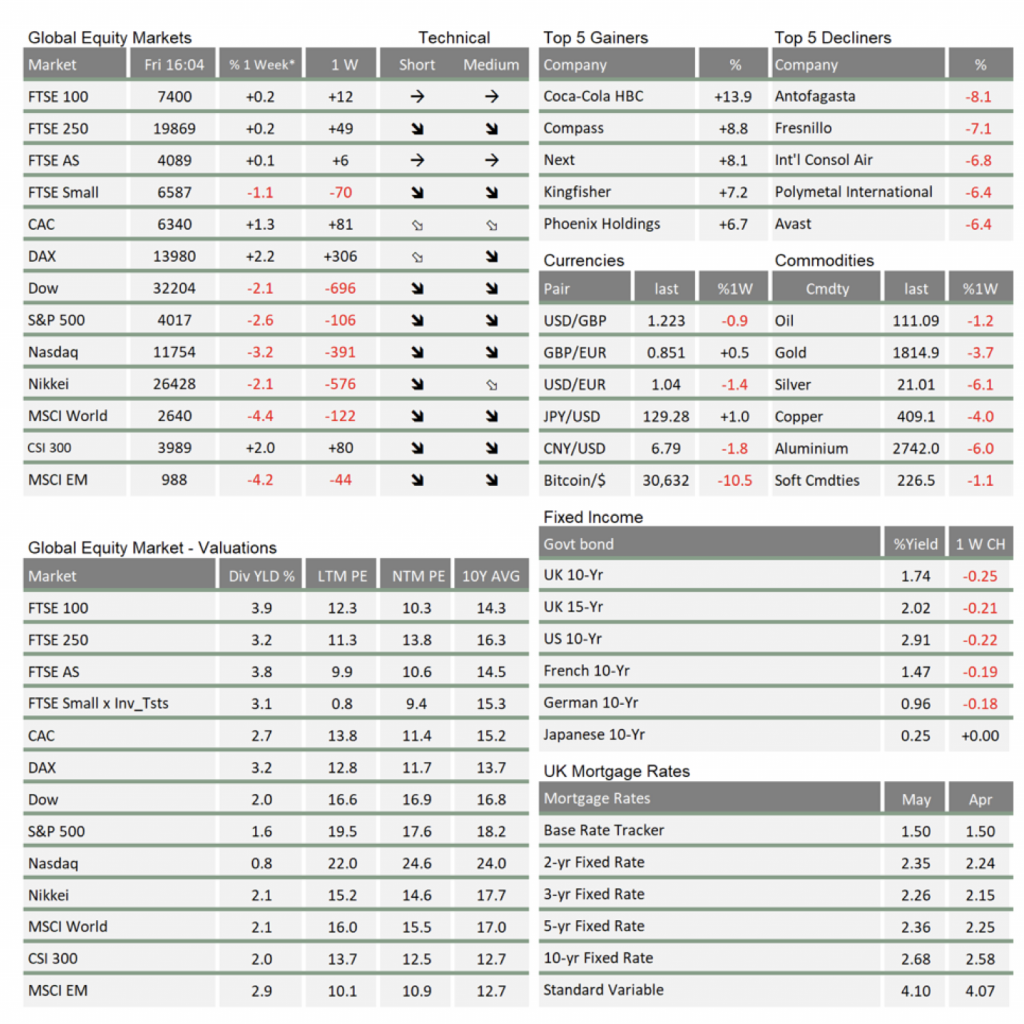