September continues to bite equity markets. Stocks everywhere wobbled again this week and even though they bounced back, the S&P500 is down around 8% in US Dollar terms for the month. UK investors might notice less of a fall, with global equities down just 1% in sterling terms. This is partly due to the fall in sterling itself, with the pound suffering yet again from adverse Brexit news. 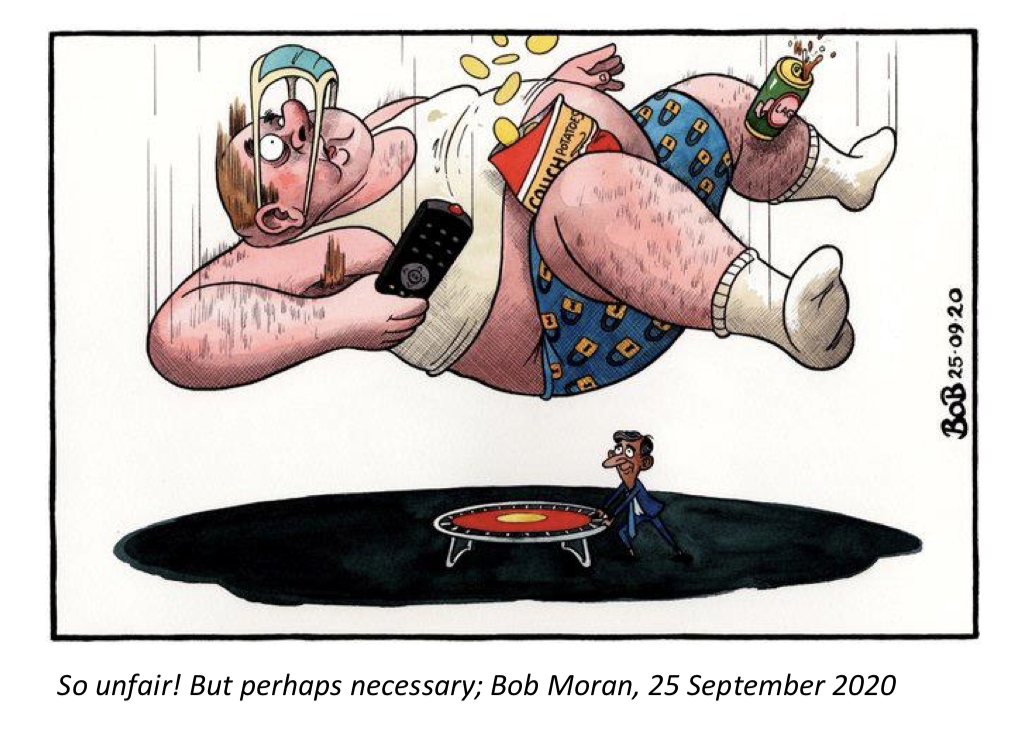 September continues to bite equity markets. Stocks everywhere wobbled again this week and even though they bounced back, the S&P500 is down around 8% in US Dollar terms for the month. UK investors might notice less of a fall, with global equities down just 1% in sterling terms. This is partly due to the fall in sterling itself, with the pound suffering yet again from adverse Brexit news.

Despite the drama in stock markets, bond markets have been eerily calm. Government bond yields have been stable – not falling amid stories of the impending economic slowdown, but likewise not rising in disapproval when governments around the world issue vast amounts of new debt. This inert response has good and bad implications. Immovable bond yields allow governments to borrow at practically non-existent rates indefinitely, helping them reflate their lagging economies through fiscal action. But from an investment perspective, flatlining yields break the inverse relationship between bonds and equities. That hinders the risk offset that bonds provide investors, making multi-asset portfolios riskier, at least in the short-term.

Still, in the deepest-ever recession, governments having fiscal free rein is an economic positive. And politicians look happy to exercise that freedom. On Thursday, UK Chancellor Rishi Sunak announced a new work support scheme, set to replace furlough. The top-up pay scheme was praised (though not universally) for its similarity to those in Europe – particularly the German Kurzarbeitergeld (translated as “short-time work allowance”) programme. Nevertheless, under current plans, the cap in government wage payments will be just 28% of what furlough originally provided.

Meanwhile, Europe’s economic recovery has stumbled, and may have even temporarily reversed. After a spike in coronavirus cases, business sentiment for the services sector has been particularly disappointing. Thankfully, European government support measures are stable. Manufacturing PMIs and other indicators remain positive, such as the Germany IFO Business Climate, which rose from August’s 92.6 to September’s 93.4.

Markets have already shown they are happy with fiscal expansion. The main issue for markets is rather the opposite: The wider public’s jeers of ‘how do we pay for it’ have already begun. Politicians are worried about the cost of their fiscal support and have started cutting incomes in response. At the same time, the continued second wave of virus cases is scaring both governments and the public away from normal economic activity. Many no longer want to go about their routines of work, spend and leisure, and those that do are limited by re-imposed government restrictions. That means businesses will be facing much lower levels of demand. And, with governments now only providing limited support, firms will have to find some way of cutting costs. As usual, wages will be the first costs cut. At least some increase in unemployment is inevitable.

In the US, the situation is also worrying. The political chasm between the Republicans and Democrats means that, despite both sides agreeing further stimulus is needed, getting a bill passed is near-impossible. The US Congress this week did manage to pass a bill avoiding a government shutdown at the end of the year – an unfortunately common occurrence – but it is virtually insignificant in the face of this economic crisis. Without another round of fiscal support, the US economic outlook is beginning to look bleak.

As we wrote when this crisis first set in, questions of how the support is paid should not get in the way of the fact that it is needed. Rory MacQueen, principal economist at the UK’s highly regarded National Institute for Economic and Social Research (NIESR), points out: “Now is not the time to be talking about scare stories about government debt.” MacQueen notes: “There is no indication whatsoever that the current approach is causing any problems or any question marks to appear over the sustainability of government debt”. Recent bond market moves suggest he is right.

This week, the UK’s Debt Management Office sold £6.5 billion of 40-year(!) bonds at a yield of just 0.66%. The amount of orders (demand) that investors put in massively overshot supply when they came in at about $50 billion. This is a clear-as-day signal from capital markets that, if higher debt levels are what is needed to stave off a classic recession, then higher debt levels it is. Markets are practically giving money away to governments, but governments are hesitant to take it.

Politicians are clearly worried about the long-term cost of the emergency measures. However, what we can read from this week’s equity sell-off is that stock markets are much more worried about the short-term cost of an avoidable recession. Fortunately, no politician pays attention to the stock market quite like Donald Trump does. He seems to see stock prices as the measure of his presidency, and will no doubt be concerned about September’s sell-off. Even if Congress cannot pass any fiscal support, the President can use executive orders to “repurpose” funds towardunemployment support. Given that this could paint him as a saviour of markets and the economy – with just 39 days till an election – he can be counted on to do so.

Capital markets can be fickle, sometimes ignoring bad economic conditions to see light at the end of the tunnel, and sometimes reacting massively to news that brings short-term uncertainty. Clearly, this year we have seen both. September’s market declines are still on the ‘long view’ side, as it is becoming clear that the initially steep V-shaped recovery after the government-imposed recession is levelling off towards more of a or inverted square root sign.

Clearly, the relative calm of the summer has given way to a choppier sideways market trend, just as our lives have once again been interrupted by the second wave of COVID-19. Markets have had to readjust their expectations, with so much now hinging on politicians. Should governments falter in their ongoing fiscal policy support while COVID restrictions are still in place, there are bound to be short sharp bouts of market volatility, as we experienced this week.

However, compared to March, the health impacts of Coronavirus are significantly less uncertain. Not only have health services been able – so far – to better treat those most at risk, but also those who are vulnerable are this time likely to be better shielded. In the best case, this means COVID- 19 has lost much of its fearsome public health impact and no longer leads to a higher excess mortality than usual flu epidemics. At worst, our ability to cope better buys time, which gets us ever closer to an effective vaccine. This is increasingly seen as coming forward from ‘sometime in 2021’ to ‘towards the end of 2020’. Markets are therefore probably right to temper their optimism, while also not falling back into panic about the medium-term future.

We continue to closely monitor whether politicians are playing their part in preventing lasting scarring on those sectors of the economy most affected by the continued restrictions. Central banks and capital markets have done their bit in providing the funding, but as the saying goes, you can only lead a horse to water. Depending on politicians’ fiscal resolve – and how they spend their money – the default risk of previously-viable businesses will either continue to be contained or begin to rise. The same applies to unemployment. At the moment, credit markets are telling us that default risk is rising, and parts of the equity markets are telling us that the short-term consumer demand outlook is falling. Nothing too dramatic yet, but a clear deterioration from the summer.

We are beginning to reach the point where we must hope the impact of the second wave causes the least negative economic impact, before the responsibility for ‘saving lives’ can be handled by vaccination rather than restriction of freedoms. This pivotal moment may not be that far away, and is one that many are not yet fully factoring in. So, while this week felt decisively gloomy compared to the summer’s recovery period, we see the return of increases in restrictions more as a pause to the recovery rather than the end. 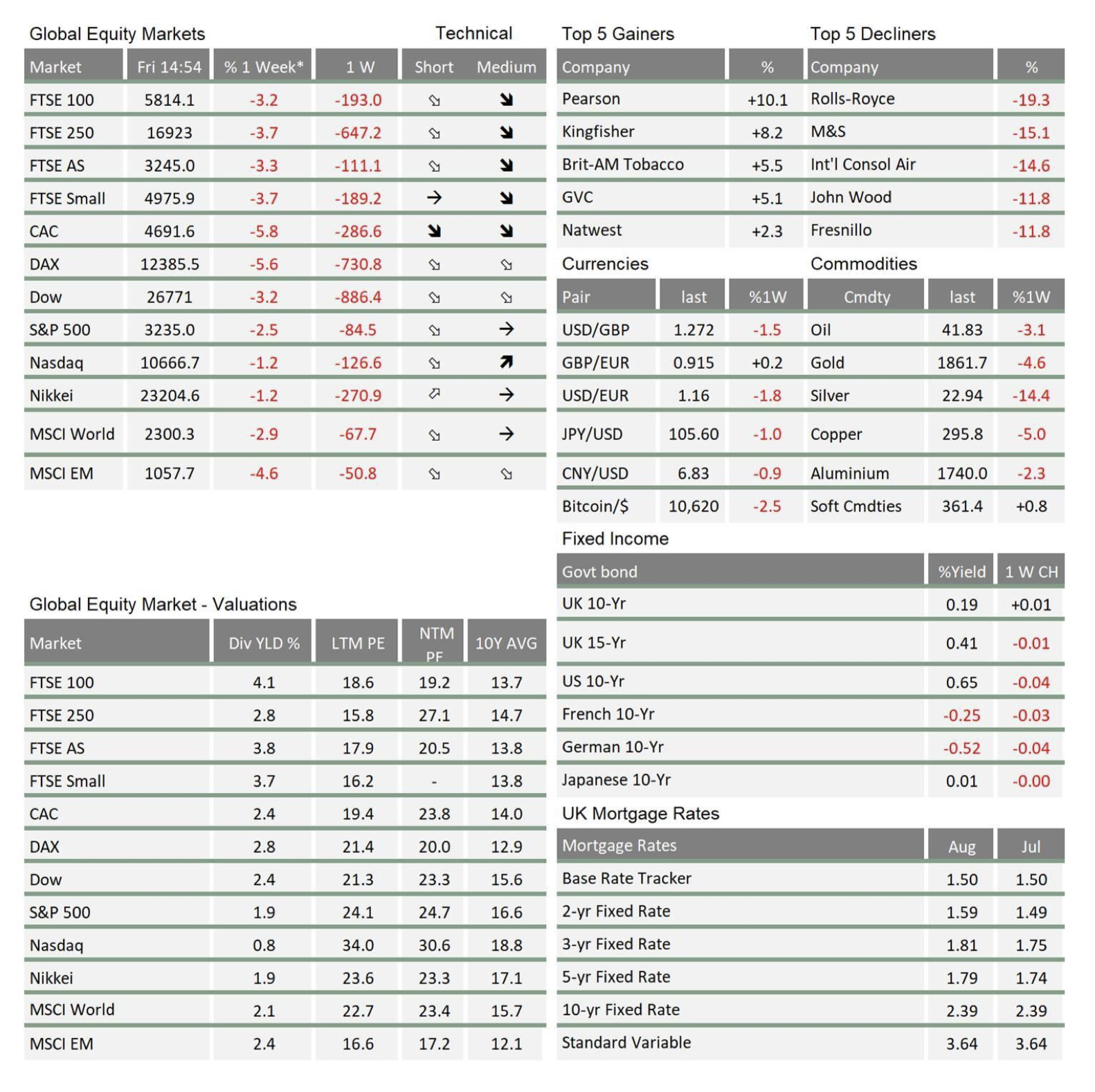