Tug of War – Bonds vs Equities

Next week will mark the anniversary of the turning point of the 2020 COVID stock market crash. Investors looking at their one-year portfolio returns may well be astonished to find double-digit return figures, ranging from around 15% for lower risk strategies to close to 50% for pure global equity portfolios. 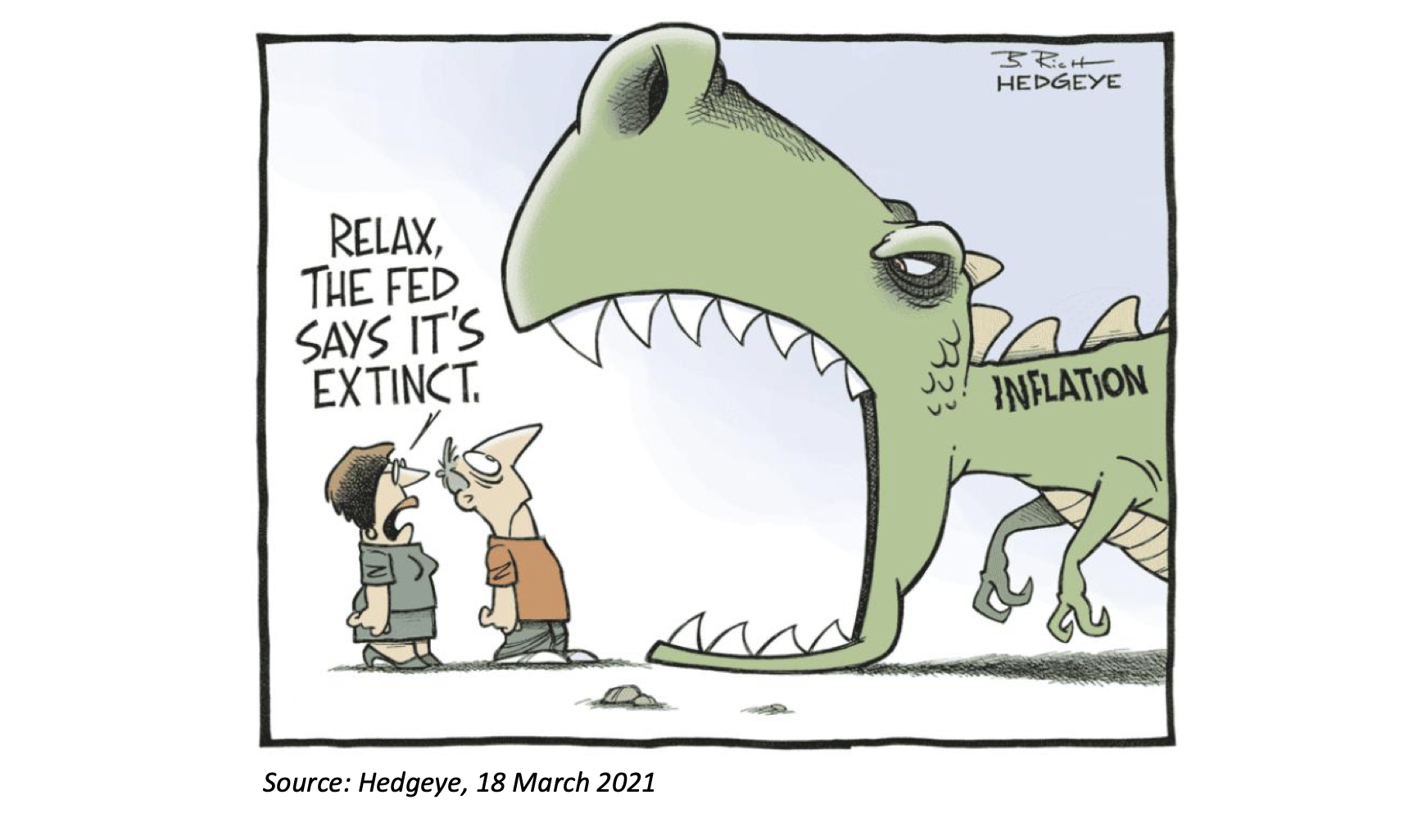 Next week will mark the anniversary of the turning point of the 2020 COVID stock market crash. Investors looking at their one-year portfolio returns may well be astonished to find double-digit return figures, ranging from around 15% for lower risk strategies to close to 50% for pure global equity portfolios. Alas, don’t expect a repeat over the coming months, as these exceptional annual return levels are purely due to the ‘base effect’. When improvements are measured from an exceptionally low point, the percentage increase is particularly pronounced. If we measure from the beginning of 2020, returns are in the much more sustainable range of 5-15%.

Nevertheless, it is pleasing that much of what we projected to clients in our ad hoc crisis communications a year ago has materialised. The global economy remains intact, and near-term growth prospects look strong – as does the likely unprecedented demand spike – once the pandemic finally retreats.

With stock markets having already priced in a considerable amount of what recovery hopefully lies ahead, there’s – somewhat paradoxically – more to be anxious about. This is a period without real historical reference, and economic data affected by the very same base effect that investors experience for their investment returns creates considerable uncertainties and nervousness that has led to renewed volatility in capital markets. Over the next few months in particular, we can expect extraordinarily high annual economic growth rates, as well as higher reported inflation numbers, almost entirely as a result of the comparison to where we stood a year ago.

Overall, markets are still making upwards progress. However, the concern over rising yields is both a risk for spoiling the expected recovery party and creating different winners and losers compared to last year. While this should not prove too much of an issue for holders of widely-diversified investment portfolios, those investors with more concentrated exposure to particular regions, industries or investment styles are experiencing a reversal of fortunes compared to last year.

Given how much sway yield levels and inflation concerns are having over market action right now, it is worth taking a snapshot of where we are, which still starts with a look at the state of the pandemic.

In the (traditionally insular) US hospitalisations are declining sharply, and the ‘positive test’ numbers have stopped falling since schools went back and the testing capacity doubled. The now- passed American Rescue Plan Act is already putting money into the pockets of American consumers, which will boost consumption strongly, especially after the winter storm-induced (rather than COVID-induced) slowdown in late February-early March. Consumer service spending could prove particularly strong with, for example, tourist resort hotels completely booked out in the coming weeks and months. As we have noted, the massive bump in US activity has dominated discussions about spillover effects into global growth, which has led to a sharp rise in long-term US bond yields, which has in turn dragged up yields elsewhere. Yet current activity data elsewhere in the world is no longer improving – just like the daily figures on the pandemic.

Case numbers are rising again in Europe and, unfortunately, this appears to be down to greater transmission rather than more testing. The vaccination pace has started to increase, and there is some good news in that the vaccines also appear to be reducing the overall impacts of catching the illness, while renewed lockdowns in Italy and elsewhere appears to have brought some stabilisation. Of course, that’s not a good story economically. The victory of vaccination is that lockdowns should not be necessary.

Meanwhile, Asia has also had some of its confidence shaken by what appears to be a small COVID resurgence. This is at a much lesser level than Europe, but has been enough to keep consumers from enjoying the oncoming spring.

Just like with the UK and £-Sterling, the slightly lower virus impact has led to the US dollar regaining strength over the past month, against the Euro and the Yen, and against many emerging market currencies. This, in turn, has fed through to some central banks beginning to tighten policies, a year after the sharp virus-led cuts.

At the margin, global monetary policy is tightening, even if the big western blocks are unlikely to explicitly do so until 2023. We look at US Federal Reserve (Fed) policies in more details below following its Wednesday meeting. Meanwhile, the European Central Bank (ECB) stands out as still in easing mode, after promising more quantitative easing. However, many other nations have started to move in the other direction.

China has been indicating a hawkish stance, as we have discussed in the past two weeks. Today, the oil-related nations have indicated a return to normality. Russia has raised rates in a surprise move while Norway has signalled it expects to raise rates later this year. Japan is allowing a (slight) rise in long-term yields. We have also seen rate rises from Brazil, Turkey, Ukraine and Georgia.

The financial conditions tightening effect of a stronger dollar, higher US bond yields and policy tightening from the above central banks have converged to take the edge off the very same global growth expectations that have been driving yields higher since the beginning of the year.

Interestingly enough, that probably means that US ten-year Treasury yields will struggle to go much higher than the 1.75% level seen briefly on Thursday. And, given that equity markets had been driven more by bond yield movements than growth expectations recently, it suggests a period of stabilisation in the recent tug of war between growth excitement, inflation fears and bond yields. 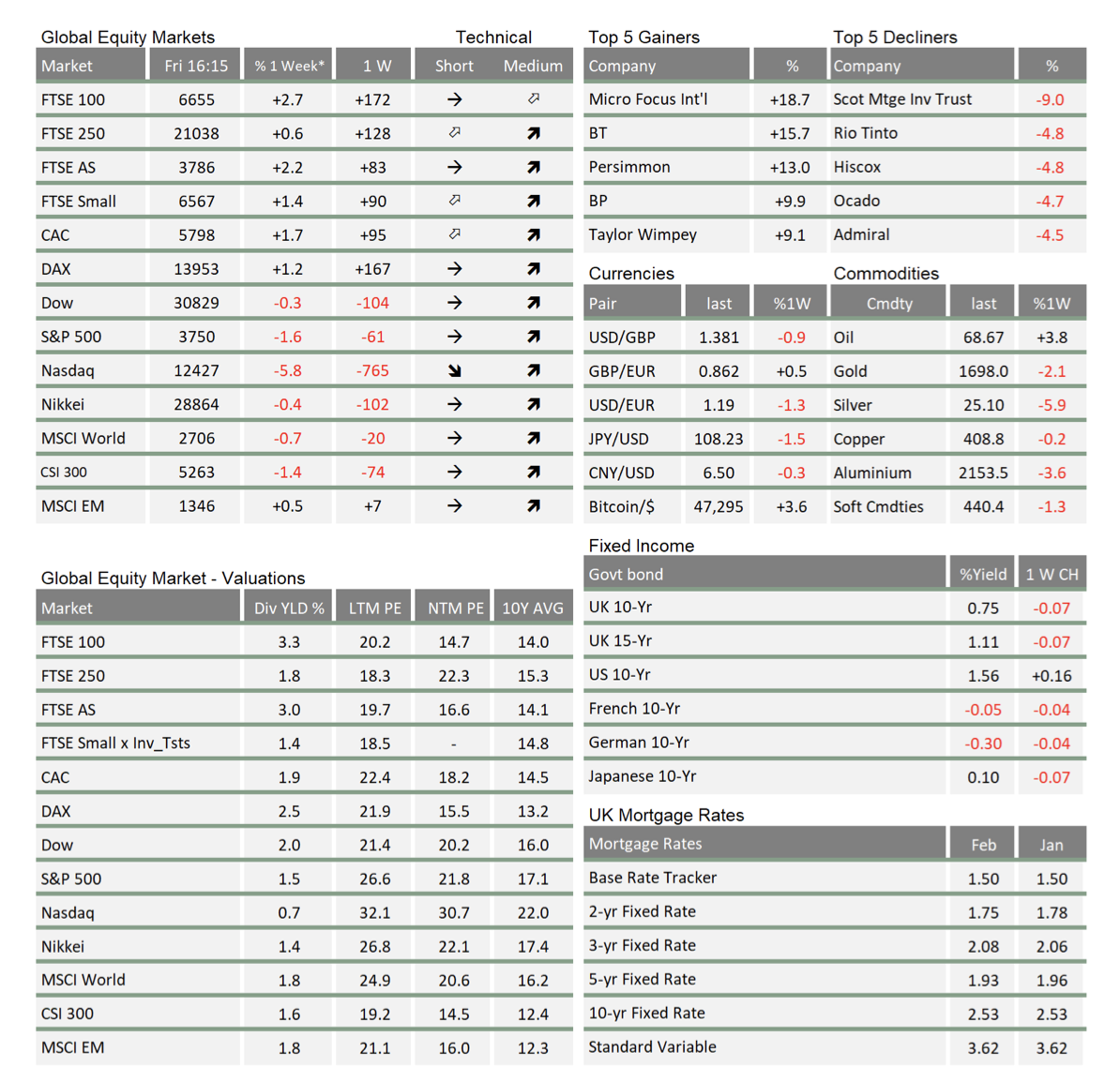