Market Update: Taking stock of market returns up to September

Against all expectations, and despite considerable intramonth volatility, September turned out to be decidedly dull for investors. After a five-month rally had left global stock indices around or above their pre-pandemic highs, the turn of Autumn sent a chill through capital markets. 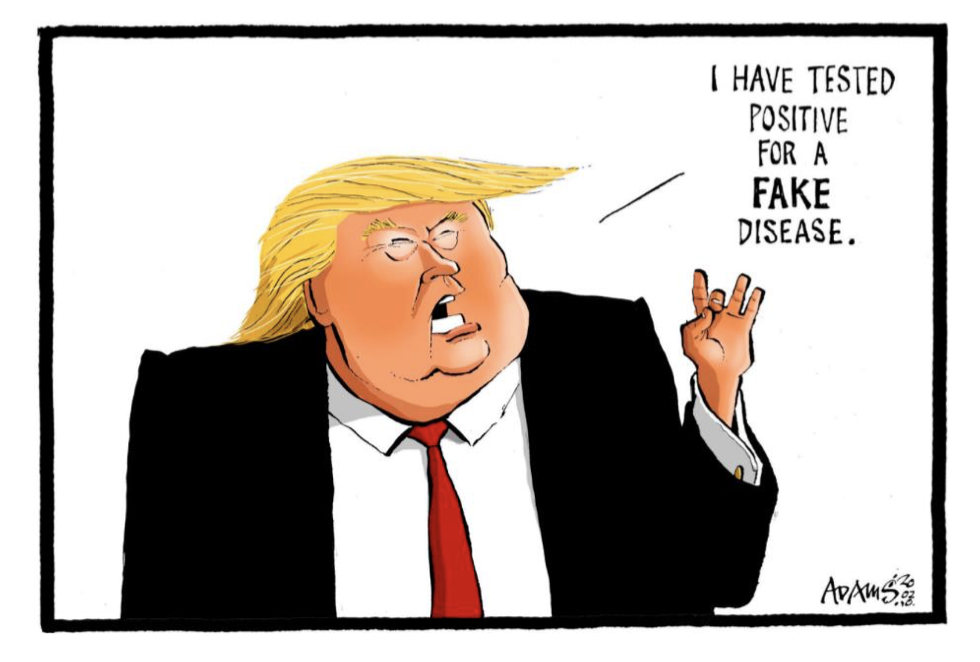 Against all expectations, and despite considerable intramonth volatility, September turned out to be decidedly dull for investors. After a five-month rally had left global stock indices around or above their pre-pandemic highs, the turn of Autumn sent a chill through capital markets.

Selling pressure built up early in the month, as COVID cases spiked around the world once more. The fear was that we were in for a repeat of March, where the spread of the virus and ensuing global economic shutdown sent markets into a panicked frenzy. But this time, level heads prevailed. While asset prices traded either sideways or down throughout the month – depending on the region and currency basis –no ‘sell everything’ fever took hold.

In sterling terms, the best regional performer – by some distance – was Japan. Japan’s Nikkei 225 climbed 4.6% in September, with the MSCI Emerging Market index the next-best performer at 1.9%. US equities, having done so well in the recovery rally from April, fell 0.4%. Most interestingly, Technology (the market darling of the last few years) was the worst-performing US sector. The tech-heavy Nasdaq index fell 1.7%, as investor optimism for the all-conquering mega-caps began to wane. Still, even after letting off a bit of steam, US tech remains up 28.4% year-to-date. 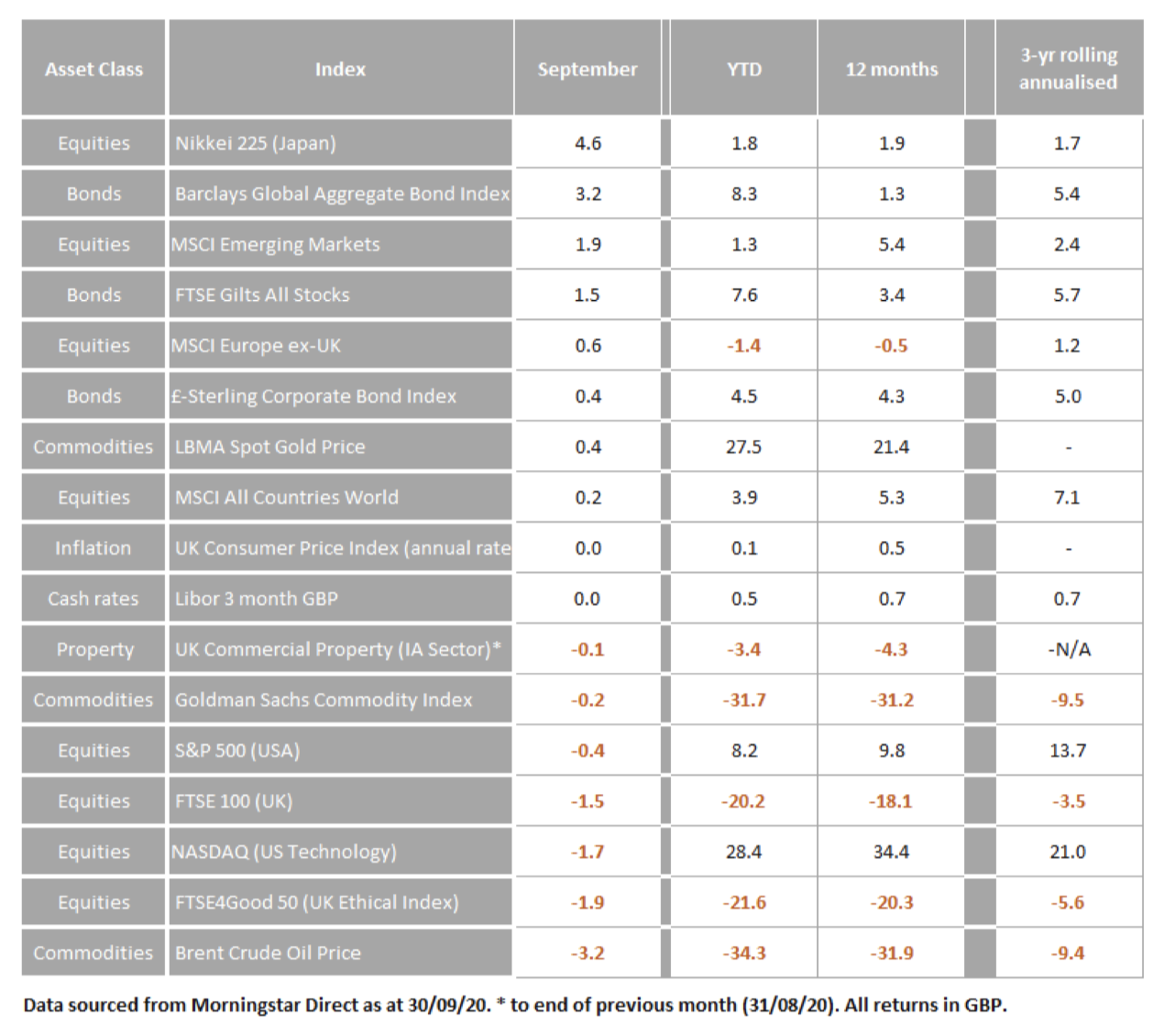 Looking deeper into the tech world, The big five – Microsoft, Facebook, Amazon, Apple and Alphabet (Google) – are up an average of 39.7% year-to-date, while the median US stock has fallen 6%. Those five companies now account for a record 23% of the entire value of the S&P 500.

UK stocks, meanwhile, continue to lag behind their global peers. The FTSE 100 once again had a rough month, down 1.5% in September and now negative 20.2% year-to-date. The double whammy of a significant economic and public health crisis – worse than any other G7 country – and damaging Brexit risks is hampering businesses. How and when these two factors will stop weighing on Britain is difficult to say, but investors should at least be consoled that, as globally diversified investment portfolios, UK assets do not constitute the predominant part of their overall investments. It is global growth – and global asset markets – that are far more important.

Overall, September’s price moves look more like the consolidation of a strong run than the flight of frightened investors. Nevertheless, market jitters were far more prominent than over the summer, with far larger price swings. As we wrote recently, commodities have been at the head of this bout of volatility – with Bloomberg’s commodity index losing nearly all its August gains last month. A substantial part of this fall was driven by oil prices, which fell 3.2% in September and are now 31.9% lower year-to-date. Gold, on the other hand, is still the second-best performing asset among those we track, up 27.5% in 2020.

Volatility goes hand in hand with the ‘wait and see’ narrative coming through in capital markets. The hopes of a swift V-shaped economic recovery that drove markets over the summer have been dashed by second wave fears, diminishing fiscal support from governments and a generally slowing rebound. The jury is still out on how long lockdown restrictions will need to last, and how quickly a vaccine – which would save lives rather than restrict social activities – can be produced and rolled out at scale.

If a vaccine which protects those most at risk can be achieved before the end of the year – or if the public health risks from the ‘second wave’ are not as great as what we saw during the first bout of COVID (which the experiences of Spain and France suggest) – we should expect the economic recovery to resume. Even in that case, activity is unlikely to rebound as quick as we might hope – with reluctance of the more fearful to return to their former lifestyles not necessarily outweighed by gushing spending and activity increases by the demob happy young and fearless.

That realistic outlook makes the second prong of the recovery – policy – all the more important. With consumers and businesses struggling to survive, central bank and government support has been vital. Central bankers have seemingly now committed to doing their part: keeping rates low and liquidity flowing for the long haul. But the fiscal side has recently left a little to be desired. Support is being handed out with less zeal than earlier in the crisis, and in some cases not handed out at all, which could drastically slow the recovery.

Unfortunately, the longer restrictions must remain in place, the more opportunity there is for a policy error. The biggest danger of this is in the US – where bitter political divisions seem to be hampering the progress of getting fiscal support to those who need it. We can take some comfort in the fact that both presidential candidates are likely to give some level of fiscal stimulus, but it is needed sooner rather than later. Thankfully, we can bank on Donald Trump going to any length to secure his re-election, and if that means further spending measures in the next few weeks, that is what we should expect. If none are forthcoming, there is a real danger that this forced recession could turn into a ‘classic’ downturn – driven by widespread corporate defaults and rising unemployment. 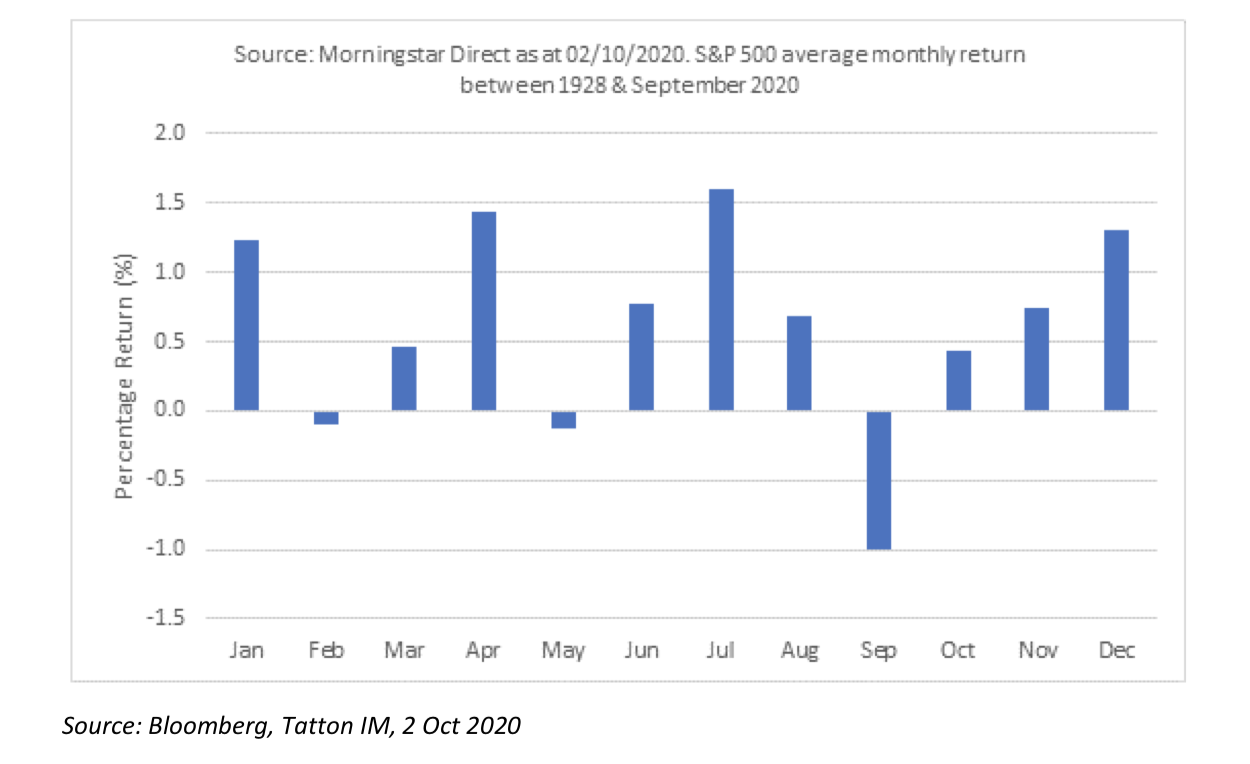 Finally, we end with a note on historical monthly returns. While last month’s market returns were a little disappointing, they were normal by historical standards. Interestingly, September is on average one of the worst months for market returns, dating all the way back to 1928. Perhaps investors prefer to take their profits after having taken stock of their investment over the course of their summer holidays. 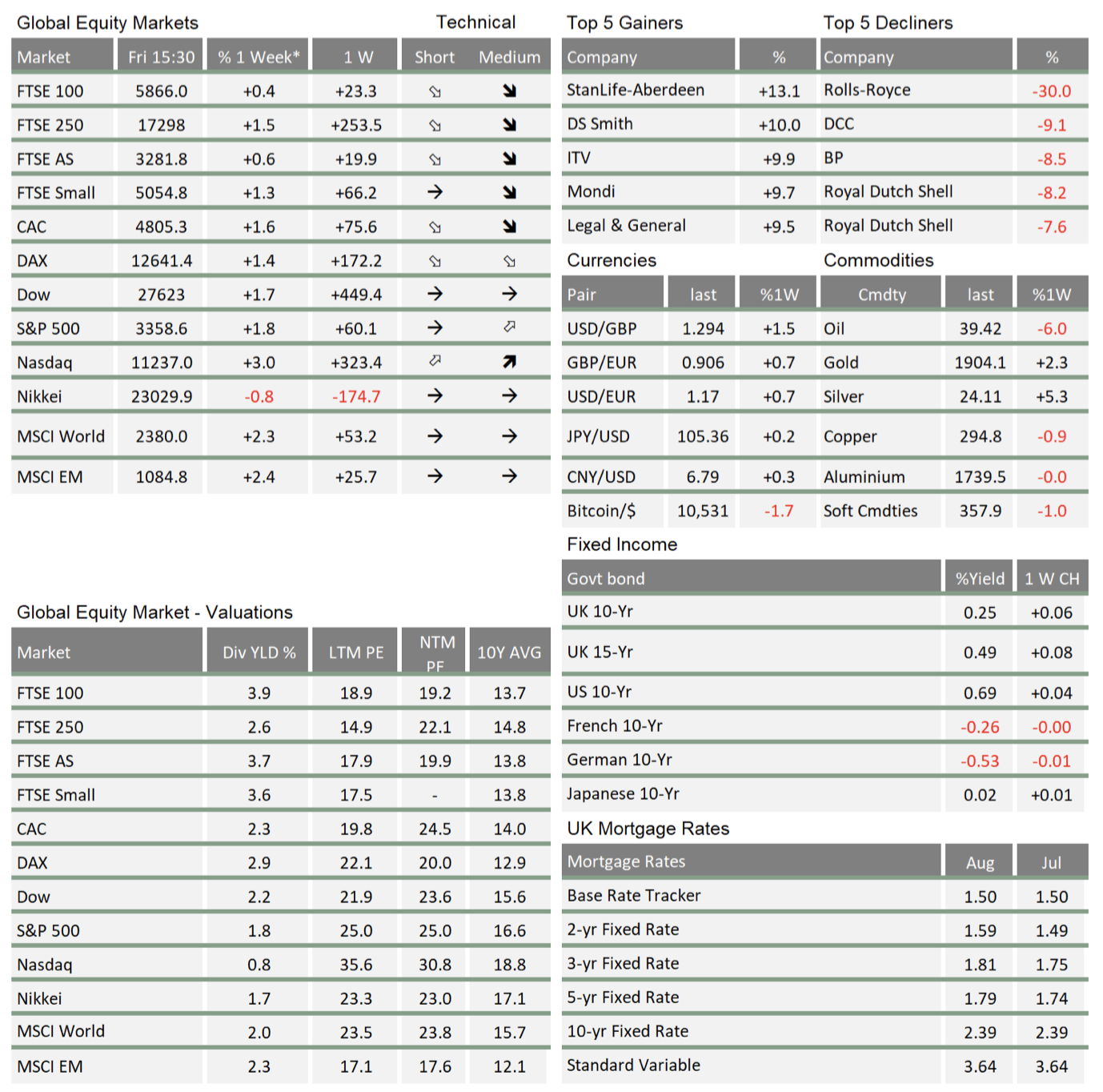