NextExtending The Scope of the Trust Register
Market Update

Equity markets have been range-bound through the past few weeks, but it does not feel like it. Volatility is at its highest since the nasty period in March 2020, which always raises our perceptions of potential downside. But the volatility is not too surprising given the overall mix of news and economic data updates. 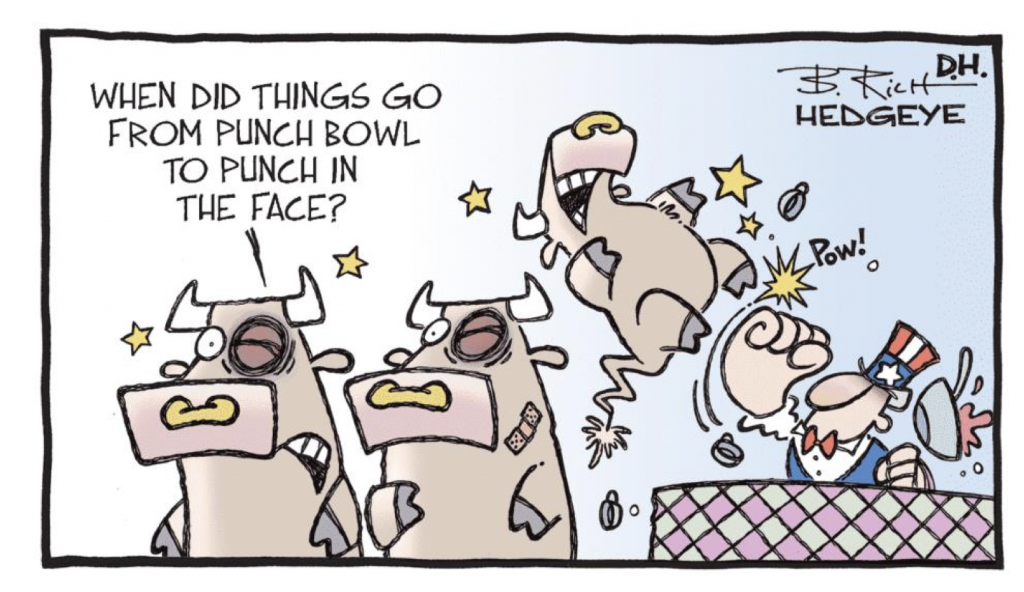 Equity markets have been range-bound through the past few weeks, but it does not feel like it. Volatility is at its highest since the nasty period in March 2020, which always raises our perceptions of potential downside. But the volatility is not too surprising given the overall mix of news and economic data updates.

Amongst the up and down, China has weakened the most with its currency, the Renminbi/Yuan, deteriorating over the course of last week, in line with the slowing signals emanating from the stringent COVID lockdown talked of in last week’s commentary (see chart below). At the other end of the spectrum, the US dollar’s march upwards against all other currencies was this week’s big story in global markets. This dollar appreciation is not helpful for global growth, as noted before, but it may help to cool inflation through lower US import prices where it matters most – in the US. 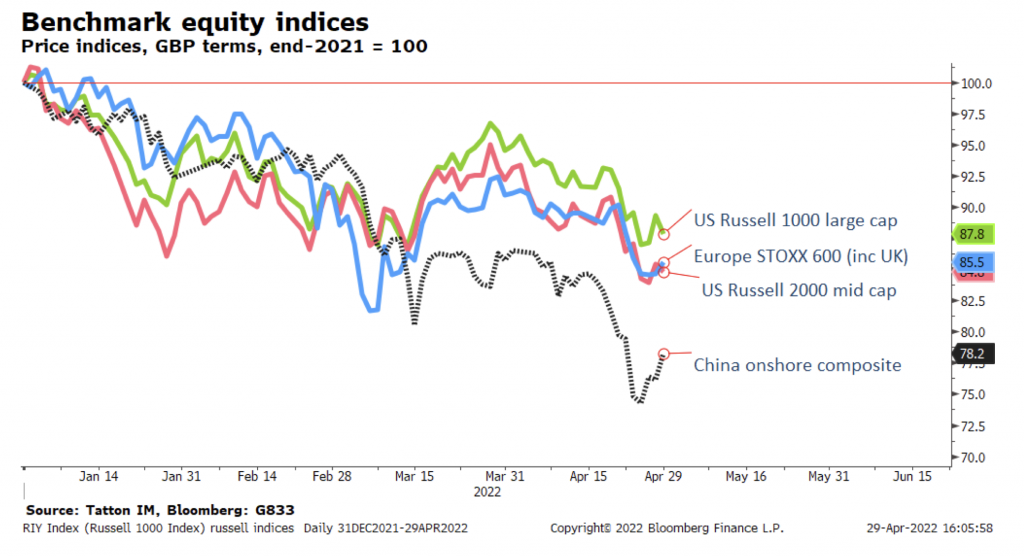 Most economic scholars would not expect the dollar to remain strong after the other big surprise of the week, which was that the US economy contracted -0.32% (seasonally-adjusted) in the first quarter. US economists quote this on an annualised rate of -1.4%.

As per usual, there are lots of caveats to the headline numbers. Nominal growth was +1.6%, (+6.5% annualised). Real growth (after subtracting inflation) would have been positive were it not for the large trade deficit (which counts as a negative for growth). In fact, nominal personal consumption – which is what truly counts for economic momentum – was up +2.4% (+9.9% annualised). Given first quarter data is also subject to huge seasonal adjustment factors– which is particularly difficult at present – we should therefore expect future revisions.

Taking the data at face value, it paints a picture of strong, not weak, US domestic demand. Indeed, it probably shows that the rest of the world slowed. At a stretch, it might indicate a global lessening of core inflation pressure. This would explain the buoyancy of stock markets following the sell-off at the beginning of the week.

Unfortunately, at the moment, inflation pressures are what drives market down days, and those pressures are coming from outside the core. Energy and hard commodities may be stabilising but food price pressures are re-emerging. Here it is not just Russia’s war on Ukraine (Ukraine is the world’s largest exporter of sunflower oil), but also a return of climate change-inflicted drought that has exacerbated a shortage in cooking oil. Domestic political pressure to deal with consumer prices has caused Indonesia to suspend palm oil exports.

Then there is the housing market, whose strength is good for consumer sentiment but is increasingly fanning the flames of general price inflation through the rental market. We write about the global phenomenon of rising house prices and rents in our second article below. Despite much higher interest rates, demand for mortgage and other credit is keeping the pressure on central banks – especially on the US Federal Reserve (Fed) to continue tightening.

Nobody should think that the US is a quarter away from recession (the usual definition being two quarters of negative growth). The Fed will perceive that real growth was weak because of its arch- enemy inflation. Next week, they will raise rates by 0.5% and tell us that there is more to do, which may well lead to another market wobble – although if the accompanying guidance is no harsher than expected any wobble may prove short-lived.

Strong US nominal domestic demand is in line with the run of Q1 earnings reports which, on average are showing expansion and are coming in better than analysts expected (although we know analysts are always too downbeat). This would normally have us expecting more positive market returns than April has brought. Against that, the high-profile disappointments for some of the previous tech darlings are interesting. Apple and Microsoft did well but the standout story was Amazon’s quarterly loss.

Many readers will be aware of the story that the multi-billion-dollar write-down of Amazon’s investment in electric-truck-maker Rivian was behind the quarterly loss of $7.56 per share (Bloomberg’s analyst aggregate estimate earnings-per-share was +$8.40). At a wider level, the story is that Amazon is now so big that it is no longer a ‘secular growth’ stock, and its results depend on economic trends. So, there was ‘good’ news, namely that delivery speeds are “approaching pre-pandemic levels” and Amazon is “no longer chasing physical or staffing capacity”.

Meanwhile, China appears to be trying to accelerate the policy shift, given it faces the fastest economic slowing in 30 years, thanks to the massive lockdowns created by its zero-COVID policy. Although some areas are said to be returning to normal, confidence this will hold is low and will remain low until the authorities move to more effective vaccination efforts. The Renminbi/Yuan was allowed to depreciate further from CNY 6.5 to 6.6/$ in an attempt to import more global demand.

Perhaps we should take comfort that China’s travails may mean a less combative stance in geopolitical relations. It would have been more difficult for US President Biden to press for $33 billion of additional funding for Ukraine’s war effort if US attention was being distracted towards Taiwan and the South China Seas.

Despite the lower equity market valuations and higher bond yields, our sense is that the current markets are not being pressured by the corporate earnings outlook. Fears of central bank policy mistakes can lead to pessimism but, historically, earnings growth remains positive well into tightening cycles. There has been a lot of talk that recession is “close at hand” but there is little in the data to suggest this. We await the Fed next week, but do not expect the earth to shake.

The essence of all the above is that investment returns are increasingly harder to come by. It is no longer enough to simply buy the biggest US tech companies (plus some crypto) and feel super clever about it. As money has a price again – and tech stocks have to compete again with real life experience activities – successful investing is once again becoming a skill that requires considerable effort, rather than just executing trades by jumping on the latest bandwagon. 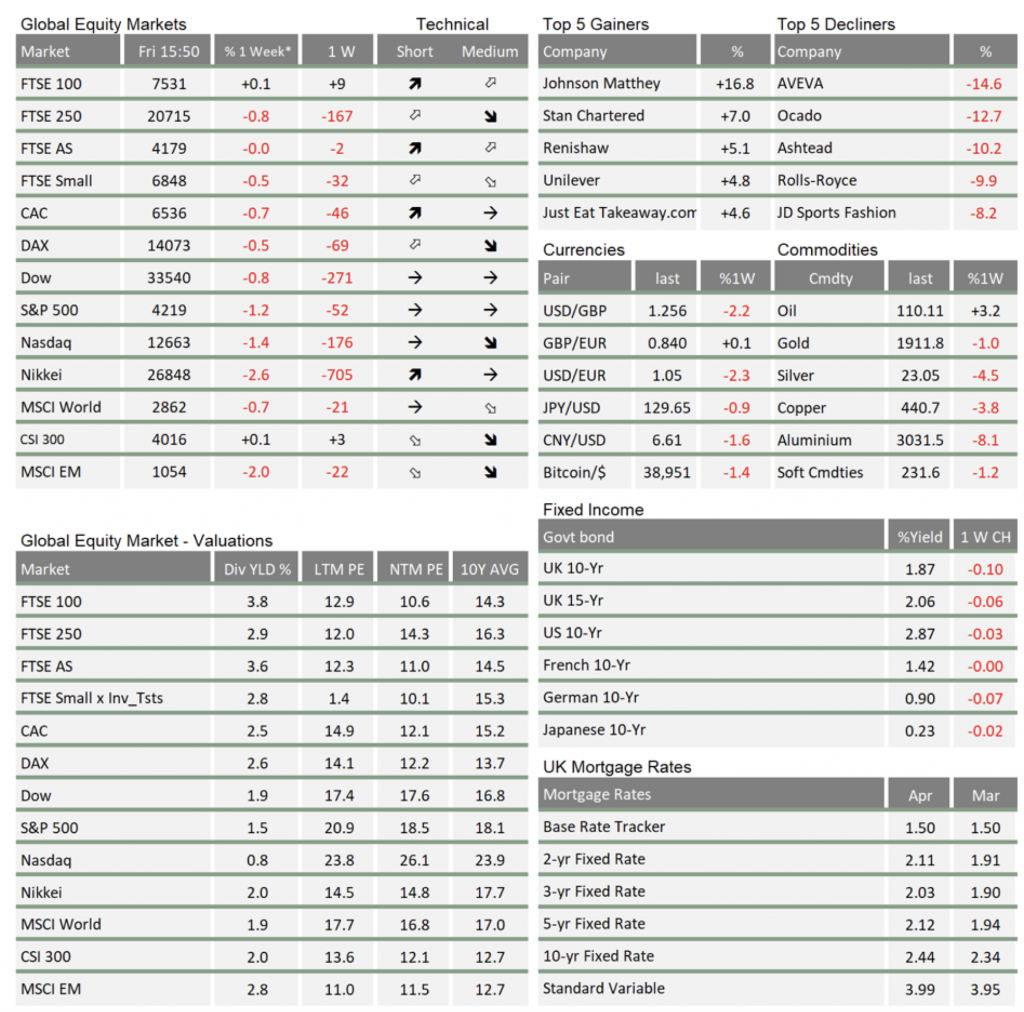