Here we go again. Having had our fun, and eaten out to help out over the summer, the UK public is back indoors for the rest of November. What the government was keen to prevent still came as hardly much of a surprise last Saturday, given rapidly-rising hospital admission numbers, the tiered shutting of regions across the country and the European neighbours having already announced similar nationwide measures earlier in the week… 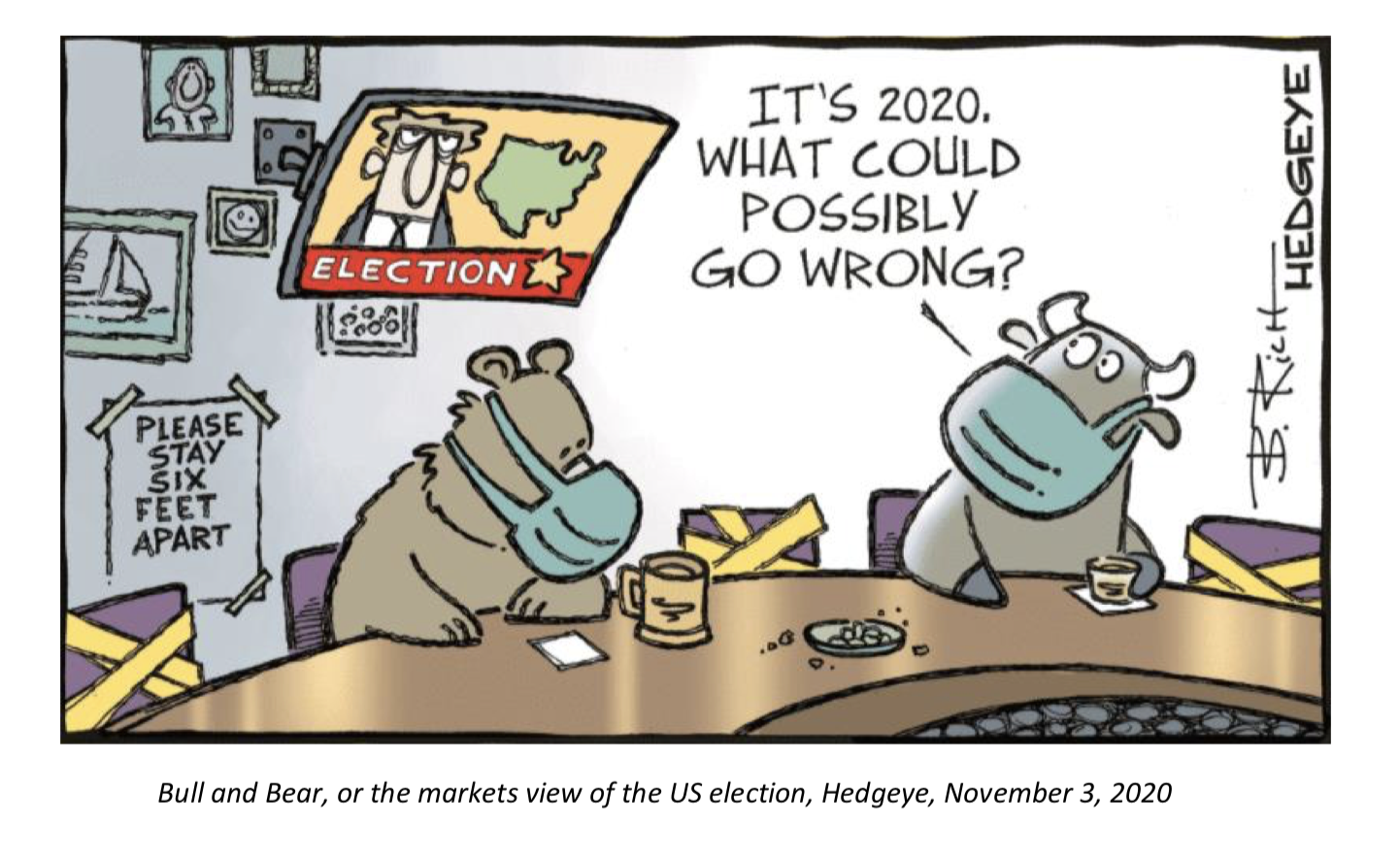 Here we go again. Having had our fun, and eaten out to help out over the summer, the UK public is back indoors for the rest of November. What the government was keen to prevent still came as hardly much of a surprise last Saturday, given rapidly-rising hospital admission numbers, the tiered shutting of regions across the country and the European neighbours having already announced similar nationwide measures earlier in the week… But a four-week (at least) re-entry into lockdown is significant for a country that has already experienced one of the highest virus-related death tolls relative to its population count – and the worst COVID-related economic contraction in the developed world. The BBC reported pictures of the nation’s last-minute shopping sprees – and anyone who tried to book a pub table on Wednesday evening can attest to the public’s desire for one last pre-lockdown libation. But with social proximity and travel-dependent businesses shutting their doors again, and those supplying them with goods and services without orders, things will get tough in a number of sectors for the next few weeks.

Service sector growth has been stalling for a while. And, according to the latest high-frequency movement tracking data, life in Britain was already grinding down over the last couple of months, as the regionally tiered restrictions came into force. The chart below shows that the steady recovery over the summer began tailing off from September, and will now be expected to nosedive just as it did in March. This in a country with already depressed activity levels relative to other major economies. 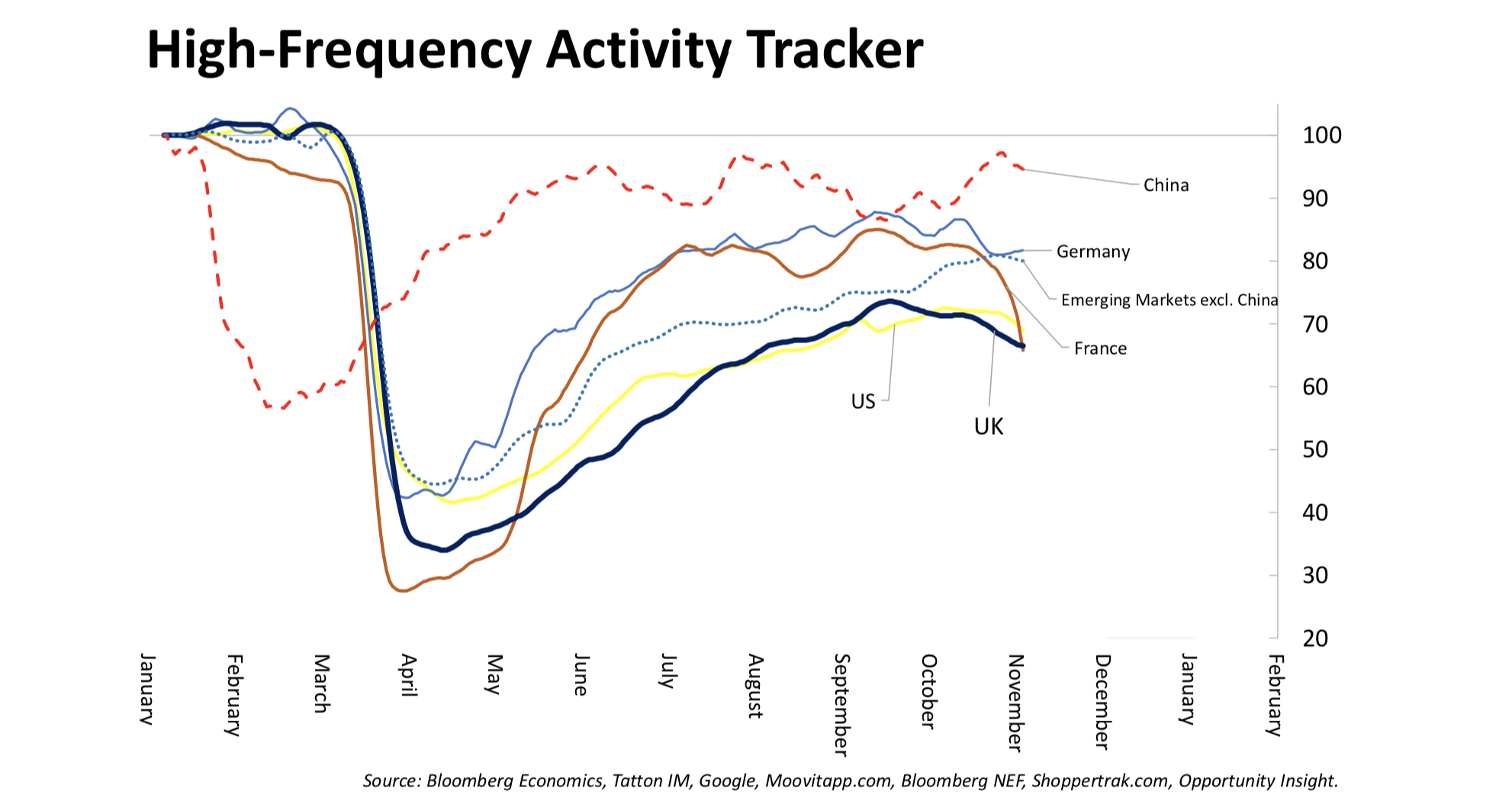 Naturally, a second lockdown will cause a significant drop in economic activity. In the second quarter – the height of the first national shutdown – UK GDP shrank by 20% compared to the first quarter of the year (quarter-on-quarter). Such a stark fall again is hugely unlikely, although we are also coming from a lower base. The National Institute of Economic and Social Research expects a relatively small 3.3% month-on-month hit, while other estimates are for around an 8% drop month-on-month. But more importantly, in times of government-enforced closures the usualmeasures of economic activity are not the best for measuring an economy’s health or prospects. The key question is whether businesses and consumers can last long enough to rebound strongly on the back of their pent-up demand when restrictions are lifted. That relies on employment levels and incomes being maintained.

On that front, Chancellor Rishi Sunak’s extension of the furlough scheme is a much-needed relief. After impressing with his fiscal firepower early on in the pandemic, recent noises from the Treasury suggested the government was becoming more hawkish on public spending – evidenced by the spat with local leaders in Manchester over furlough and other payments to citizens living under tighter restrictions. This was decidedly a negative for the economy, threatening to turn this government-ordered recession into a ‘classical’ one of widespread unemployment and weakening demand.

In that respect, recent virus developments have perhaps been a perverse positive – reminding the government of the need for fiscal support through these difficult times. In the revised furlough scheme, 80% of wages up to £2,500 will be covered – as well as up to £7,500 in trading profits for the self-employed – while even those made redundant after 23 September are able to be rehired and put straight onto furlough.

From our perspective, the biggest bonus is the Chancellor’s announcement that the scheme will be extended to the end of March, hopefully well beyond the end of lockdown. This extension is recognition that many businesses and individuals will not simply be able to fend for themselves after 2 December, and that continued support is needed to see the public through a difficult winter. Some sectors – such as travel and leisure companies – will feel the pain well into next year, even if restrictions begin to lift into Christmas.

Supporting employment in this way will obviously cost the Treasury heavily, hence Sunak’s prior fiscal restraint. Capital Economics, one of our research providers, reckons new measures will push expected public borrowing from an already unprecedented £390 billion (19.6% of GDP) to over £420 billion next year. That equates to 21.7% of GDP already, and more could well be needed.

As we have said many times before though, the ‘how do we pay for it’ question should not get in the way of the fact that it must be paid. The alternative would mean sustained damage to the economy, which would decimate the tax revenue base more severely than the cost of repaying the COVID debt at some point in the distant future. We are a long way off having to fret over the deficit, thanks to the extraordinary measures being taken by the Bank of England (BoE). This week, its Monetary Policy Committee (MPC) unanimously voted to expand its asset purchase programme by £150 billion. This was an even larger monetary injection than expected, and means the government will be able to borrow extensively without bond yields moving up from their current lows.

The size of the quantitative easing expansion seems like something of an unexpected message to the government, with the BoE telling politicians forcefully that the money is there to be spent, a significant break from its historically unbending stance of promoting fiscal constraint. As we saw earlier in the pandemic, central banks are effectively ‘monetising’ government spending with practically unlimited bond purchases. The most incredible part is that capital markets are wholly on board with the programme.

In normal times, you would expect a government spending regime backed by a central bank’s printing press to be a sure-fire way of spiking inflation and causing the currency value to fall. But throughout the pandemic, markets have behaved entirely the opposite way. News that governments will have free rein has generally been a positive for currencies, while signs of fiscal conservatism have been a negative. This is precisely what we have seen over the last few days, with sterling holding strong despite extensive monetary and fiscal expansion. It means that markets are much more worried about short term blows to the integrity of the economy from a tightening of the belt than they are about universally rising public debt levels and the potential for rising inflation.

In investment terms, these positive policy dynamics leave us in the odd position where, despite entering an economically damaging lockdown, markets look fairly sanguine. Indeed, we have seen the FTSE 100 climb over the week, perhaps buoyed by the hope of a growth rebound next year. With activity nosediving again, if market optimism continues it will leave us with stretched valuations once again. But if this lockdown is indeed shorter – and given that we have all been through it once already – markets will be hoping the recovery can pick up where it left off and become sustained in the new year should vaccines prove effective and start being rolled out over the Christmas period.

Should this hope that vaccines bring an end to the pandemic be disappointed, and replaced by the prospect of continuous rolling lockdowns for the foreseeable future, then no monetary and fiscal support pledges will be capable of averting the resulting disappointment and sobering reassessment of a recovery which – at the moment – is squarely priced in. This is an unlikely outcome, judging from most indications of the pharma sector, but it cannot entirely be ruled out. More than cautious optimism is therefore not warranted just yet. 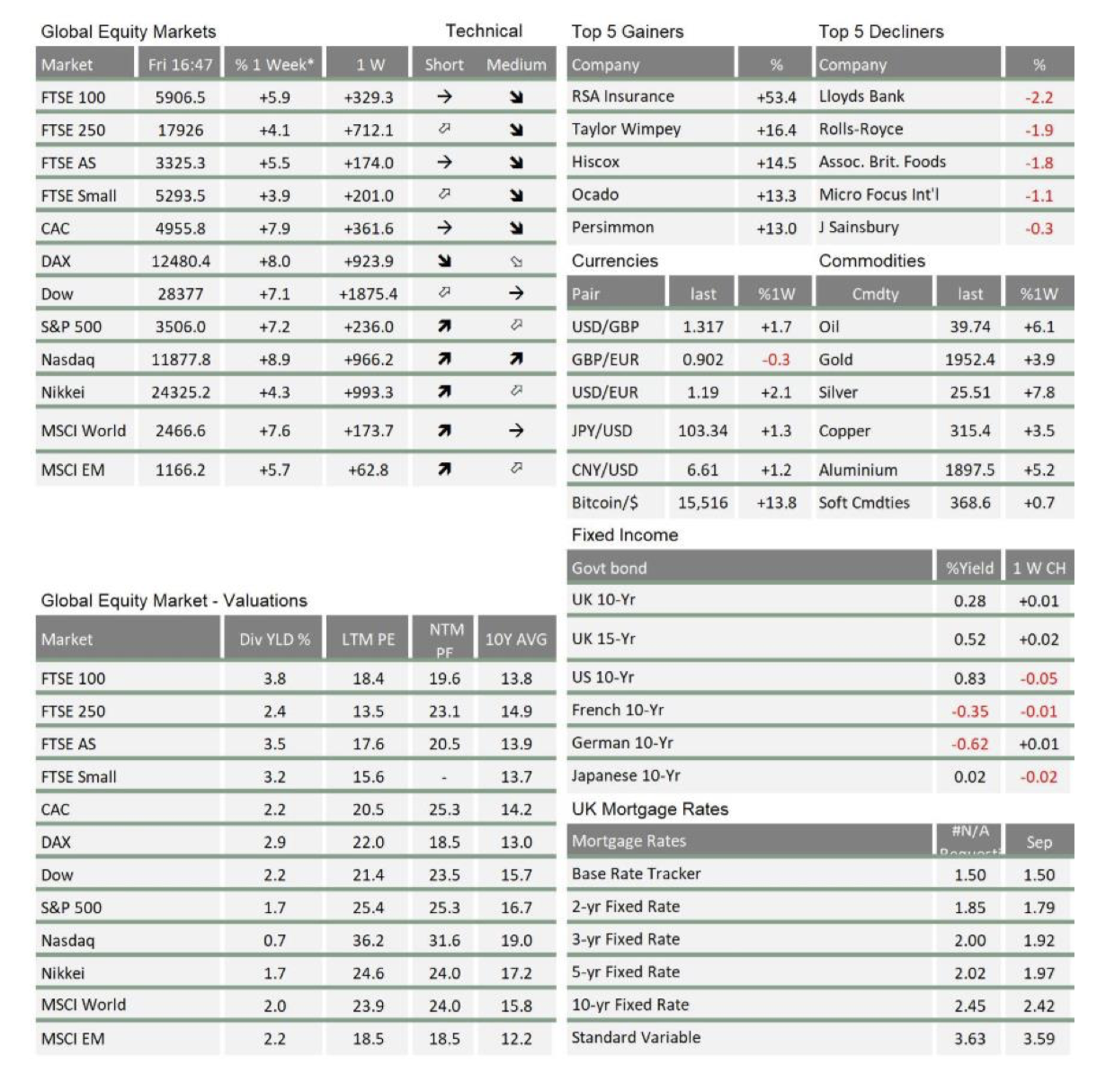