We are halfway through the most disturbing year in generations and that much-used word won’t go away: unprecedented. Over the course of the first quarter, it became steadily more probable that the coronavirus crisis that had started in China would engulf everything around us. In late February, stock markets finally faced up to the inevitable and nose-dived. Investors’ mad dash for the exit accelerated throughout March, turning the sell-off into a sell-out of tradeable financial assets, resulting in the most rapid stock market crash on record. 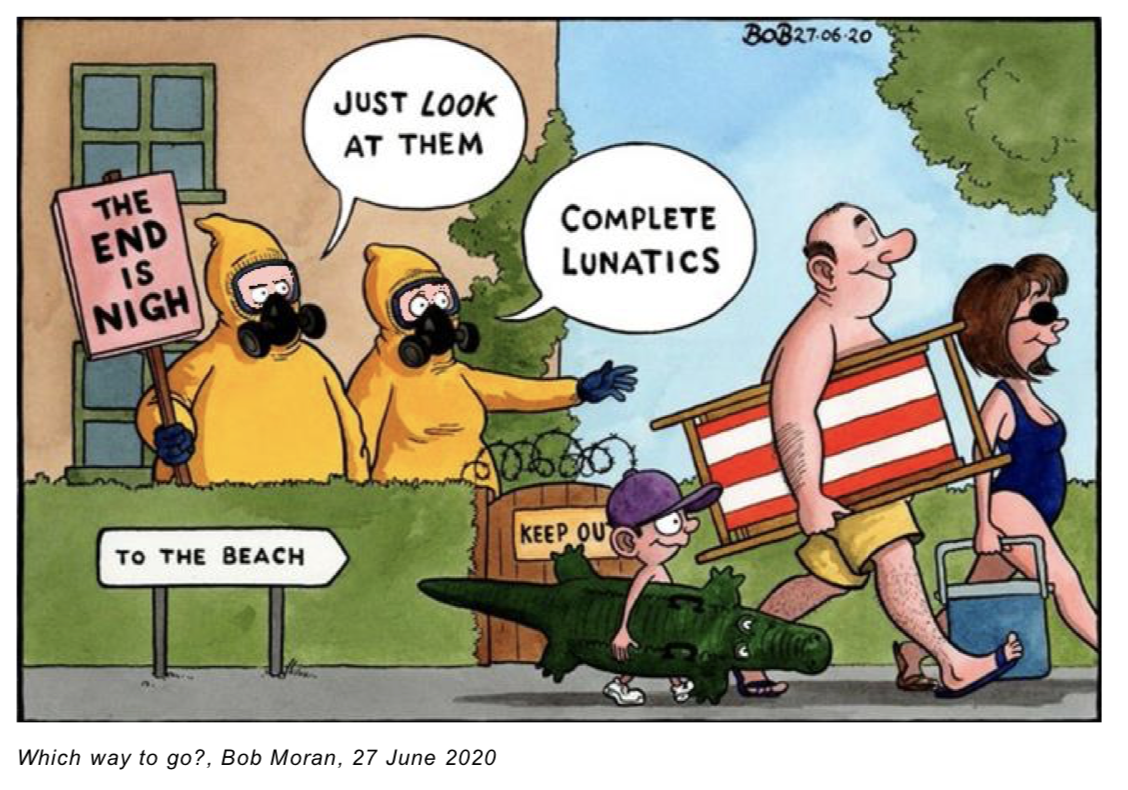 We are halfway through the most disturbing year in generations and that much-used word won’t go away: unprecedented. Over the course of the first quarter, it became steadily more probable that the coronavirus crisis that had started in China would engulf everything around us. In late February, stock markets finally faced up to the inevitable and nose-dived. Investors’ mad dash for the exit accelerated throughout March, turning the sell-off into a sell-out of tradeable financial assets, resulting in the most rapid stock market crash on record.

In Q2, the global lockdown fears that had pushed equities off a cliff became reality and the world economy followed stock markets, falling into the fastest and deepest recession in history. And yet, once central banks pledged open-ended amounts of emergency liquidity to capital markets, the ‘dash for cash’ ended just as abruptly. Global stock markets regained their composure and climbed higher, based on the insight that Q1’s illiquidity fears had driven markets lower than even a severe recession would justify. 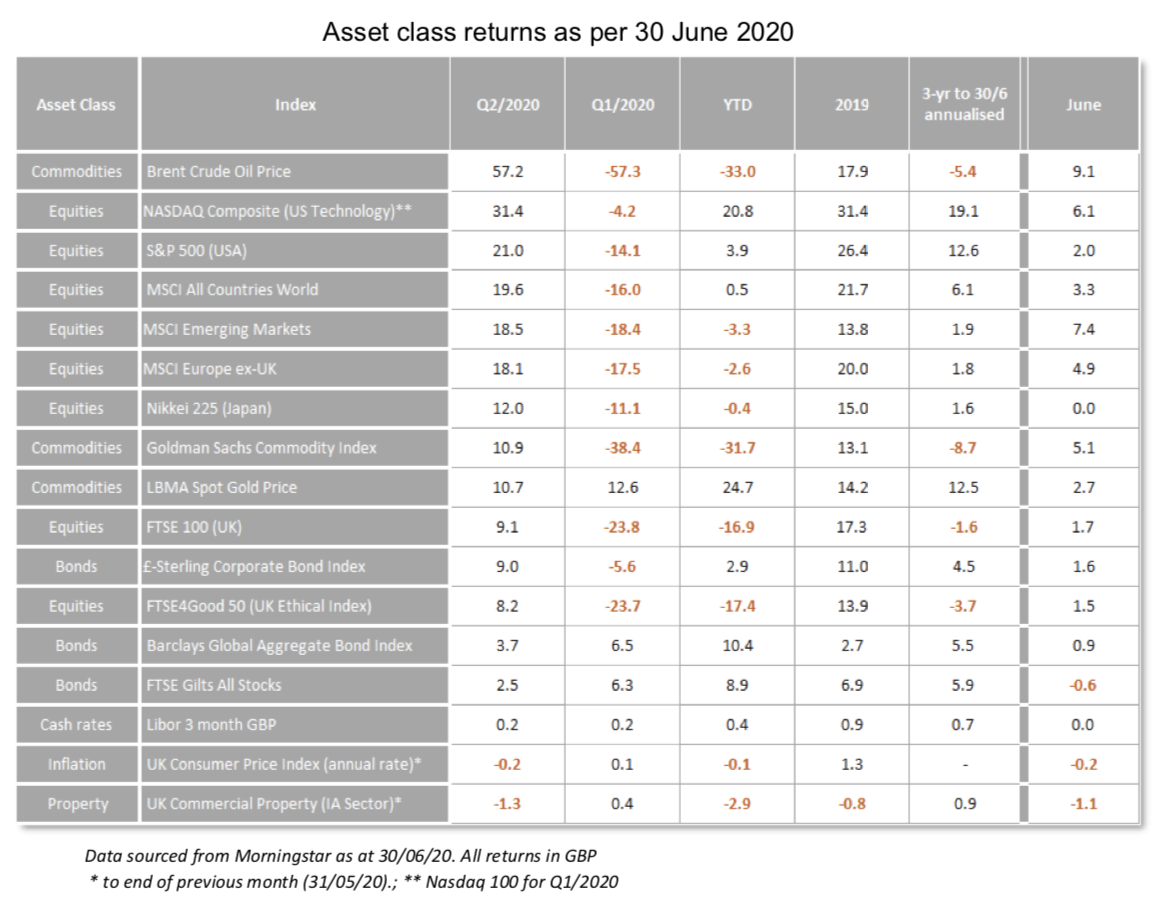 What began as a rebound from a market overreaction turned into a full-on bull market during Q2, which many high-profile commentators and investors are labelling as much a dislocation between the 2020 COVID-19 economic fundamentals and markets as the Q1 market crash was at the other end of the spectrum. Yet what all these comments fail to recognise is that both sides of this year’s extraordinary market gyrations have been amplified like never before by swings in actual and perceived monetary liquidity. In late February and March, the existential fear of so many investors was that the available liquidity would not be enough. But since April, confidence has held firm that whatever stresses may bear down on the world economy, lack of money will not be one of them. It is true that central banks were at the heart of this incredible reversal of sentiment, but the notion that the market recovery has been entirely on the back of central banks’ money creation fails to recognise that their actions unlocked and brought back private investor liquidity in even larger volumes.

As a result, and despite the economic hardship of the global lockdown containment unfolding beneath them, equities experienced one of their best quarters on record.

In the US, the technology-heavy NASDAQ saw its best quarterly percentage return since 2001, the S&P 500 its best since 1998 and the Dow Jones Industrials index its best since 1987. Oil prices, which sunk to incredible depths after a production war between suppliers just as demand was vanishing, climbed an eye-watering 57.2%. This is despite the US oil futures market registering one of the most extraordinary market events of many a year. Prices briefly turned negative, as maxed-out storage forced contract holders to pay others to take the oil off their hands.

Central banks remain committed to keeping capital markets awash with cash, come what may. They achieve this predominantly by buying up government and corporate bonds with money they create. Those who are selling their bonds to the central banks are left with an abundance of released capital which, by the simple rules of supply and demand, pushes down and keeps the cost of capital at the lowest levels known in recent history. This has afforded governments free rein to expand their fiscal programs and plug the gap between now and normality, safe in the knowledge that whatever debt they issue will not saddle their budgets with painful interest burdens for the foreseeable future. What has turned ‘risk-free’ government bonds also ‘return-free’ has made equities look attractive by comparison, just as long as the prospect of economic growth returning eventually remains viable, and corporate defaults are kept to a minimum as pledged by governments and central banks. As such, equities have been boosted by even mild recovery news.

On a regional level, our big call for Q2 was that emerging markets would fare better than developed markets. This was mainly based on the positive outlook for China, whose assets account for around a third of the MSCI EM index (and much more in many actively managed EM funds) and which came out of its lockdown while the rest of the world entered it. Domestic fiscal and monetary support meant it could provide demand for exports from surrounding countries in Asia, despite a drop-off in global demand. Sure enough, the MSCI EM index returned 18.5% over the last three months, with a 7.4% jump in June alone.

Looking ahead, that positive case has waned somewhat. That early advantage has mostly gone as other major regions – particularly the European Union (EU) – have also opened up, and China’s reluctance to pump up their already notorious credit bubble with further liquidity has led to less supportive financial conditions there than elsewhere. Meanwhile, the political risks around China have increased dramatically. Human rights crackdowns in Xinjiang, and the recent effective end to Hong Kong’s autonomy, have ratcheted-up tensions with China’s largest trading partners. US legislators have already passed multiple anti-China bills with more on the way, and other nations look set to follow suit.

From an investment perspective, we note the difference here with Europe, where economic policies have been surprisingly strong and supportive, and political risks have subsided. Not only has the European Central Bank made monetary policy as supportive as possible, but there has been genuine progress towards a coordinated fiscal response for the first time in years. Europe is also similarly export-heavy, and so should be in a prime position to take advantage of any rebound in global activity. As such, the positive sentiment now seems to be shifting from China and wider emerging markets to Europe.

We are still optimistic for the US economy, but cautiously so. The US Federal Reserve has continued to boost liquidity, but has slowed the pace of its injections. It has achieved the turn in investor sentiment it set out to and is now aiming to find the balance between what continuous support is required and what might cause ‘malinvestment issues’ further down the line. The added complication, however, is that those US states that had relatively few coronavirus cases earlier in the year are now experiencing worrisome increases, a consequence of easing lockdowns before the first wave of infections had swept across them. Interestingly, we note that expectations for November’s presidential election has had little or no impact on capital markets – with investors seemingly indifferent between the two candidates. Instead, how well the authorities can contain local outbreaks – and how quickly company earnings can bounce back post-lockdown – will probably dictate markets from here.

The same is true for most of the world. With markets swimming in liquidity – and just a small proportion of private investor liquidity having been unlocked by the shift in sentiment – it is now all about earnings improvements. Current analyst expectations are that we will have to wait until the end of 2021 before earnings are back at late 2019 levels. Signs of a faster rebound should send markets higher, even at elevated valuations. But signs of a slower recovery could send markets down again… 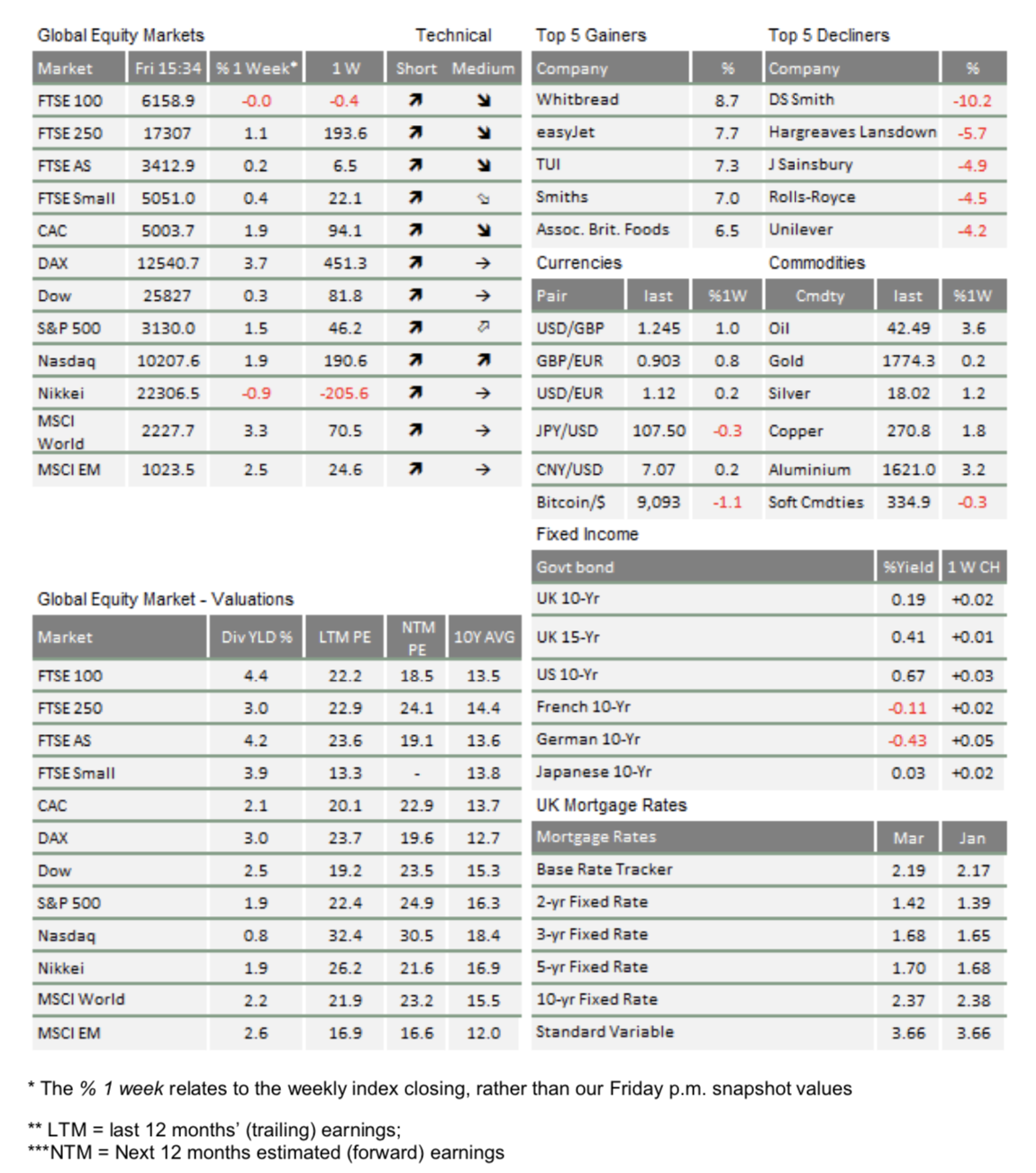