Market Update: Paying For It

Last week, we noted the increasing importance of fiscal policy, and sure enough this week the UK kicked-off the new school year with a big fiscal bang. National Insurance contributions are on the rise, along with a further tax charge on dividends to fund the NHS and social care over the next few years.

Market Update September: Paying For It – The Major Economies Ponder Their Balance Sheets

Last week, we noted the increasing importance of fiscal policy, and sure enough this week the UK kicked-off the new school year with a big fiscal bang. National Insurance contributions are on the rise, along with a further tax charge on dividends to fund the NHS and social care over the next few years.

The trigger may have been the current COVID stress the NHS is under, but fundamentally this is a structural move. Across the global, healthcare systems and provisions for the elderly are under strain as populations age and people live longer. In principle, we are in favour of government efforts to tackle these shortcomings. For the UK though, the grade for artistic execution is a bit underwhelming.

The UK government’s measures are predominantly based on financial shifts – tax more to spend where needed. There is little intrinsic reform of the system. A debate about increasing efficiency in the NHS did not even take place. The social care reform predominantly targets financial aspects, and after the 2017 election debacle (when Theresa May’s social care policy and subsequent u- turn caused “chaos and confusion”), owning a house keeps its advantageous status in the means testing exercise. So, we can forgive the younger, employed ‘generation rent’ population for feeling unfairly targeted yet again. Admittedly, taxes on dividends will rise too, although some companies could offset this with stronger share buyback schemes.

Generally speaking, the fiscal move bucks the ‘smart austerity’ trend which emerged after the global financial crisis and Eurozone debt crisis, whereby balancing the books should go hand-in- hand with structural reforms. Tax-and-spend feels somehow very continental European, even if in an international comparison, the UK tax burden is still relatively low, as the chart below shows. 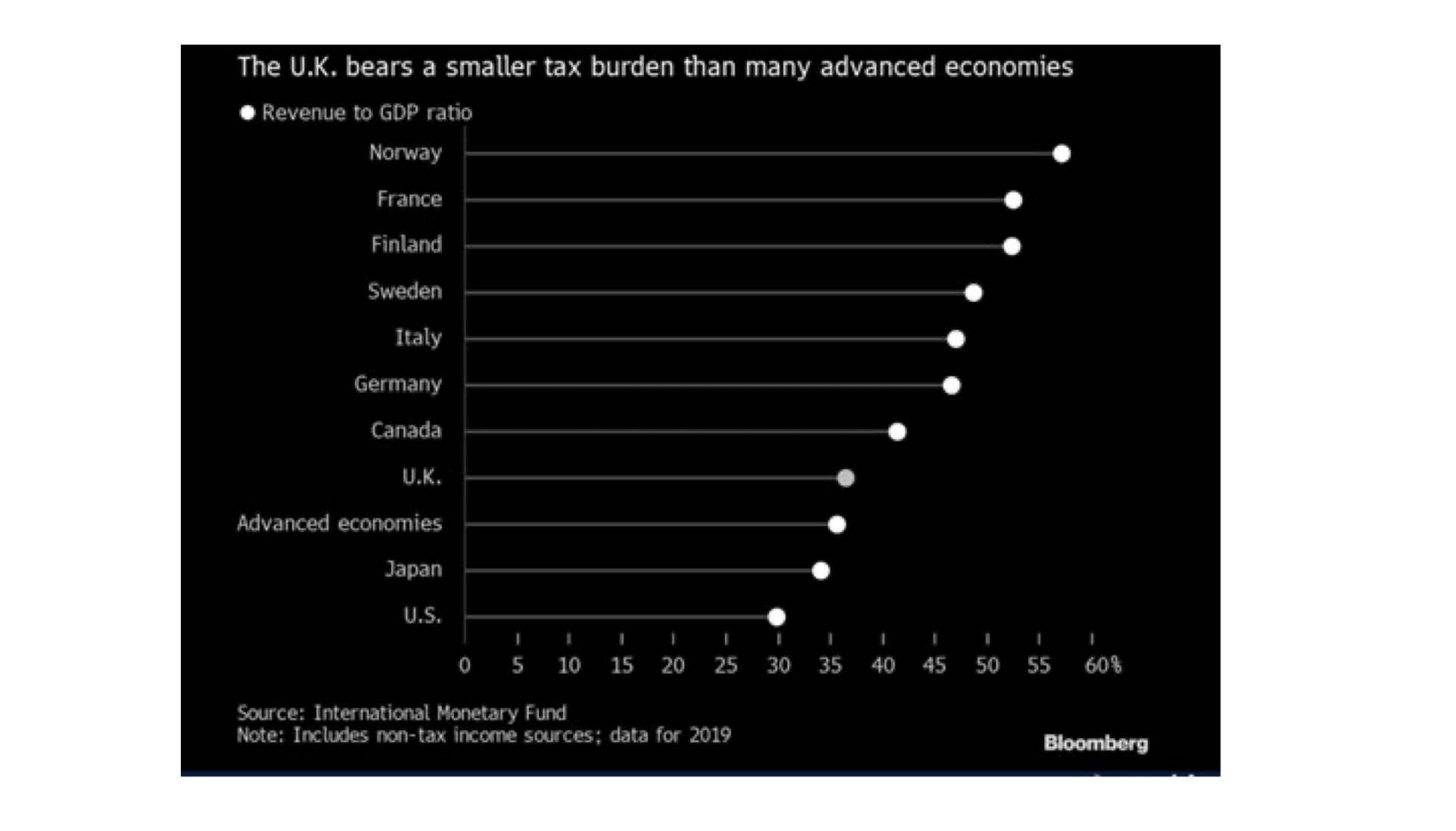 More importantly, on a global basis, spending debates dominate, which keeps injecting nervousness into financial markets. In the middle of putting together multi-year spending packages, US Treasury Secretary Janet Yellen warned the US could run out of cash in October, after it hits the debt ceiling. Raising the debt ceiling is yet another political battle between Republicans and Democrats, as Republicans do not agree with the Democrats’ plan to spend USD 3.5 trillion on social care. For now though, US fixed income markets have kept their calm – most likely assuming a compromise can be found.

Even European markets found some calm after a turbulent September so far for fixed income and equities. At Thursday’s news conference following its monthly meeting, European Central Bank (ECB) President Christine Lagarde assured participants “the Lady isn’t tapering” and postponed the debate around withdrawing stimulus programmes to December. Sure enough, another debate is kicking off, around the European Union’s (EU) famous Stability and Growth Pact, which stipulates the criteria for debt sustainability. The European Commission will launch a review process, and countries will position themselves in the run-up. Smaller nations have already reacted and placed themselves firmly in the camp of debt reduction by sending a letter (see image below), whilst other suggestions revolve around the idea of excluding green investment spending from the fiscal criteria. For markets, the impact can range from negative or neutral to positive – provided the latter can be seen as efficient investment spending which ultimately improves productivity (something notoriously lacking for several years). 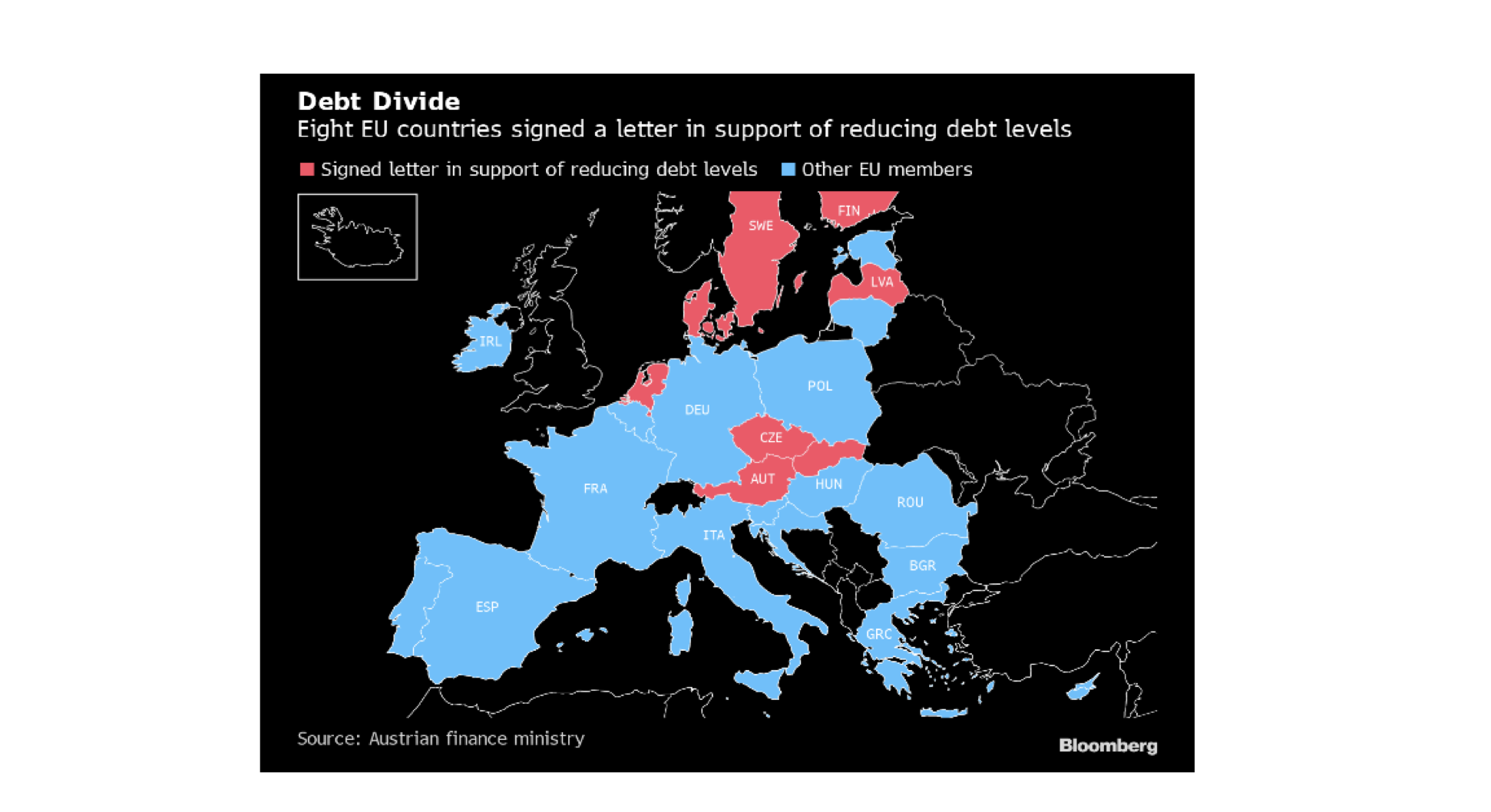 In the more immediate future, equity markets are preoccupied with the issue of supply constraints, where perception has moved on from it being a purely inflationary phenomenon to a factor weighing on earnings. Indeed, US coatings producer PPG withdrew its earnings guidance for Q3 and full-year 2021, as disruptive commodity supply and patchy client demand from those impacted by chip shortages render the near-term too uncertain to call. Meanwhile, the CEO of Dutch paint company Akzo Nobel topped this uncertainty up by stating: “If you want to do some work around the house, get in the car and buy paint right now,” as well as suggesting the raw material shortage “will probably be with us deep into the first half of 2022”. While we keep underlining that this is a temporary phenomenon, the S&P materials index is down 1.6% on the week. We talk about the long-run outlook and effects of ‘new’ commodities in a separate article below.

Connecting the dots, markets are still focused on the themes of elevated valuations, an air pocket in economic growth and the removal of monetary stimulus. The Bank of England (BOE) presented itself again as a front-runner, with the market believing Governor Andrew Bailey’s comments this week are all but good enough for pricing in a rate hike next year. At the same time, we see little evidence of an end to the business cycle. The long-run fiscal outlook and economic investment activity will be shaping the nature of long-run asset performance. It looks like the UK is adopting more of a conservative stance than Europe and the US, but we’ll wait for the UK’s Spending Review and Budget on 27 October for confirmation. 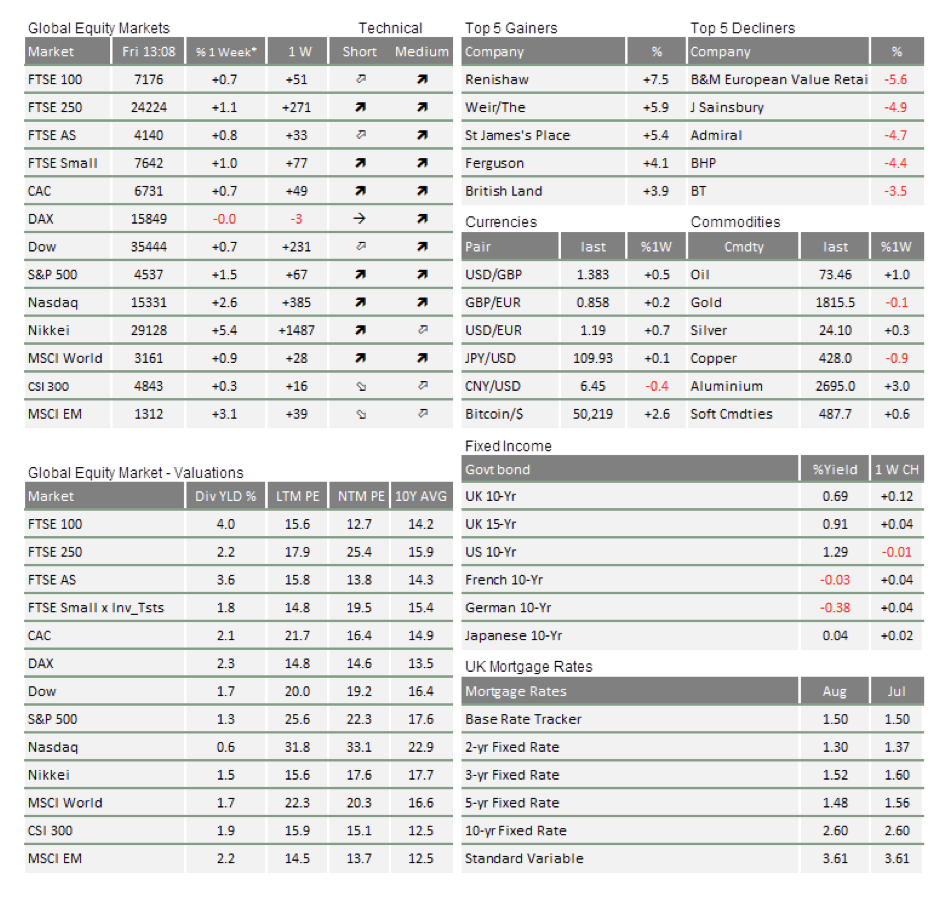