Market Update: Markets wake up to living with the virus

It has been a week of ups and downs. Monday saw sunshine and relaxation as so-called ‘Freedom Day’ COVID restrictions were lifted in England. Investors did not join in the party, though, as major equity indices sold off around the world. Markets recovered most of those losses later into the week, but the episode marked an unwelcome return of volatility. Unfortunately, that market volatility has been matched by uncertainty in the underlying economy, as the spread of the virus continues to pose a threat to global activity.

Market Update July: Markets wake up to living with the virus 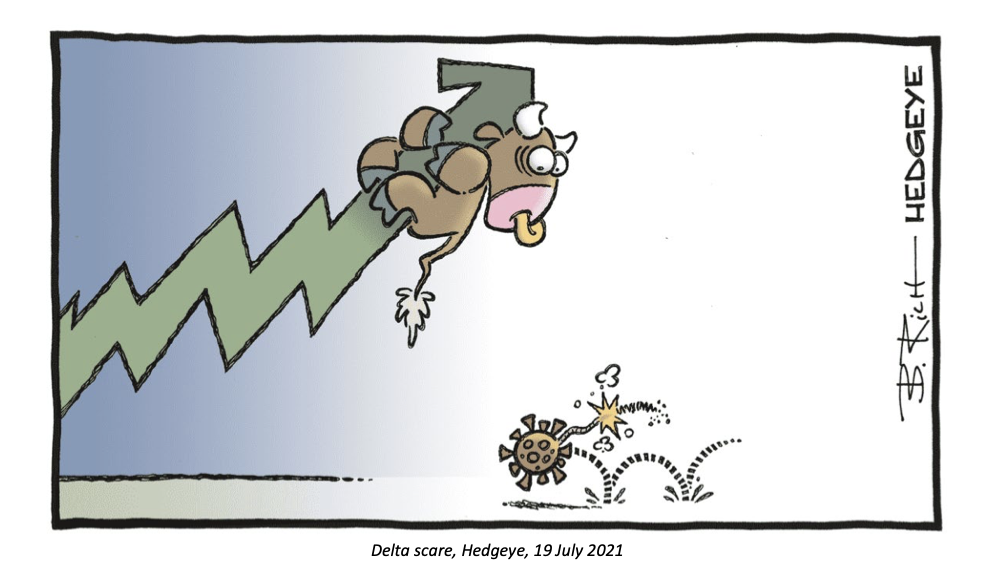 It has been a week of ups and downs. Last Monday saw sunshine and relaxation as so-called ‘Freedom Day’ COVID restrictions were lifted in England. Investors did not join in the party, though, as major equity indices sold off around the world. Markets recovered most of those losses later into the week, but the episode marked an unwelcome return of volatility. Unfortunately, that market volatility has been matched by uncertainty in the underlying economy, as the spread of the virus continues to pose a threat to global activity.

Like everyone, we had hoped rapid vaccination programmes would bring some stability and respite to the world. Only a few weeks ago, markets seemed so convinced of this narrative that the main question for investors was not the virus but what comes after, namely how would the world economy fare through the transition and, indeed, what are we even transitioning too? Unfortunately, a global surge in the Delta variant has put that question on hold. Virus concerns are still ever-present in decision-making, for governments, businesses and individuals.

We can see this in the latest economic data – the so-called ‘nowcasting’ from JPMorgan. It is a measure of the current growth rates in the world’s major economies, and estimates a snapshot based on the latest available data, adjusting for seasonal effects (so, without distorted base effects that can skew more traditional growth measures). As seen in the chart below, we saw a significant drop in growth throughout June. This was particularly pronounced in the US, which followed astronomical levels in the spring to a much more muted summer, and in Japan, which is now estimated to have sunk to a mild contraction. 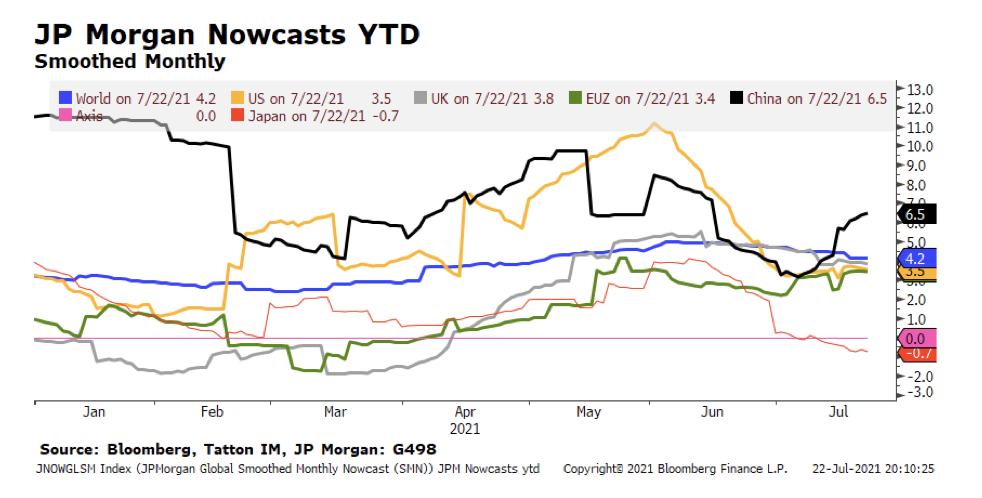 Fears of continued restrictions or a health catastrophe are clearly weighing down economic sentiment. However, we note that the current virus spread within highly vaccinated populations still seems different from the negative impact of earlier in the pandemic. The chart below confirms hospitalisation rates in the UK are picking up, but for now at a slower pace than in previous phases. And, most importantly, the death rate is much lower (note that the data series flattens towards the end of the chart as the data lags). Should this continue, we expect economies to operate in a less restricted way while the virus still circulates. Another cautiously optimistic sign is that the case number displays some signs of peaking. Were this peak to come in the next few weeks, markets would certainly be pleased. 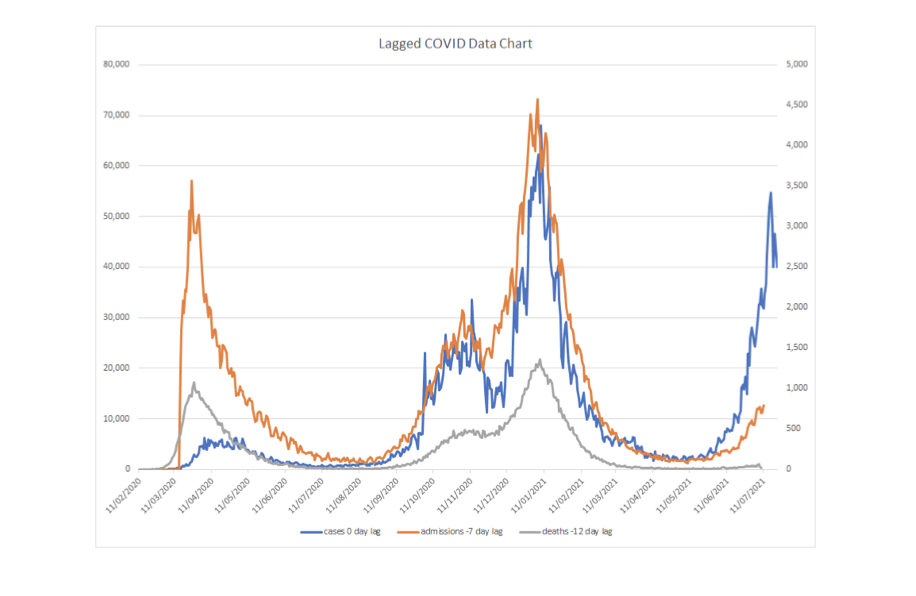 For us, the primary concern had been that in such context – when societies find their way to live with the virus – policymakers may end the intense monetary and fiscal support too soon, choking off the recovery. But central banks have been at pains to reassure everyone of their dovish intentions. The US Federal Reserve (Fed) has been key in calming those market nerves, but support from the European Central Bank (ECB) has been equally important. Therefore, Thursday’s ECB’s policy update was probably the event of the week.

ECB President Christine Lagarde offered clearer guidance (compared to previous updates) that interest rates will stay at current levels, or lower, until it sees progress in growth forecasts for the Eurozone. Officials also stated that the outlook for Eurozone inflation must reach 2% “well ahead of the forecast horizon”. In other words, policy tightening would not happen just because the ECB foresaw inflation rising in two or three years’ time. The revision in guidance was backed by an overwhelming majority of the ECB Governing Council, and it was taken as a dovish sign by news outlets.

We should point out a few things about the ECB release. First, its guidance was conditional rather than absolute, stressing that policy would have to be reactive to incoming data. Reports that the ECB is pursuing a “lower for longer” policy are therefore a little wide of the mark. If growth suddenly came in much stronger, the ECB is resolved to act quicker. Second, the change in forward guidance only concerns interest rates. There was no real discussion of the ECB’s other policy tools, and Lagarde was coy on what undershooting the target might mean for its various support schemes. Third, Lagarde underlined that the ECB Council will use its own judgement when assessing the need to change policy, which means there is no automatic data or forecast-driven policy reaction function. That is not particularly new, but it is telling that Lagarde thought it worth emphasising.

For now, the ECB is looking ahead to the September projections for policy clues. No one knows what those will say, but they “will certainly have an impact going forward”, according to Lagarde. Ultimately, the bottom line is that the ECB will allow inflation to run hotter than its target rate before it considers tightening policy. Even if that makes little change right now, it is significant that the central bank is moving to a reactive approach rather than a pre-emptive one. Officials at the Fed made the same pledges last year, to the warm approval of capital markets.

Closer to home, personnel changes for the Bank of England’s Monetary Policy Committee (MPC) are generating some interest. A couple of weeks ago we mentioned that Andy Haldane’s departure might mean others would shift slightly more hawkish. Michael Saunders was the prime candidate and he obliged quite quickly. He joined colleague Dave Ramsden in pointing out the Bank may stop buying bonds “fairly soon”, which led to some gilt price underperformance versus other government bond markets.

Another new MPC member is Catherine Mann, who focused on the fragility of recovery in her confirmation hearing to the Parliamentary Committee. Her accommodative tone suggests she will join other dovish MPC members, at least in the near-term. Long-dated gilts outperformed US Treasuries by over 0.5% through the past week.

Central bank support is crucial for markets as economic expectations wane. In a further sign that the outlook is dampening, the US Dollar continued its strengthening against global currencies – usually a signal that investors are looking for safe haven assets. There were a few interesting short-term movements during the week, and this Dollar strength came mostly at the expense of other developed market currencies like the Euro and Sterling. On the other hand, Emerging Market currencies, which tend to be correlated with risk-on sentiment, had days when they fared better. The Chinese Renminbi held up, but the Japanese Yen was a standout performer after a sharp upward move on Monday and Tuesday.

This fuelled speculation that a big Japanese investor might be reducing exposure to ‘foreign’ assets in both equities and corporate bonds, or that it might be linked to the woes of Chinese real estate firm Evergrande (touched on in the next article). Worries about contagion from Evergrande potential default have even led to comparisons to Lehman Brothers in 2008. While Evergrande is certainly big enough to cause problems and is comparable to Enron and WorldCom in its potential liabilities, it is far too soon to make the comparison, and Evergrande is unlikely to be anywhere near as systemically important as Lehman Brothers. Furthermore, it is clear the Chinese authorities have an eye on both Evergrande and the broader credit situation in the economy; indeed credit liquidity is a major policy tool in China and hence a negative surprise moment – or even black swan situation – is hard to envisage.

The summer holidays are upon us, and hopefully will mean peace, quiet, and lots of spending on leisure activities. Perhaps the US and EU central bank events in late August and September will be the next major focus. With thinner trading volumes expected, it would be nice not to have deal with anything significant for a few weeks yet. 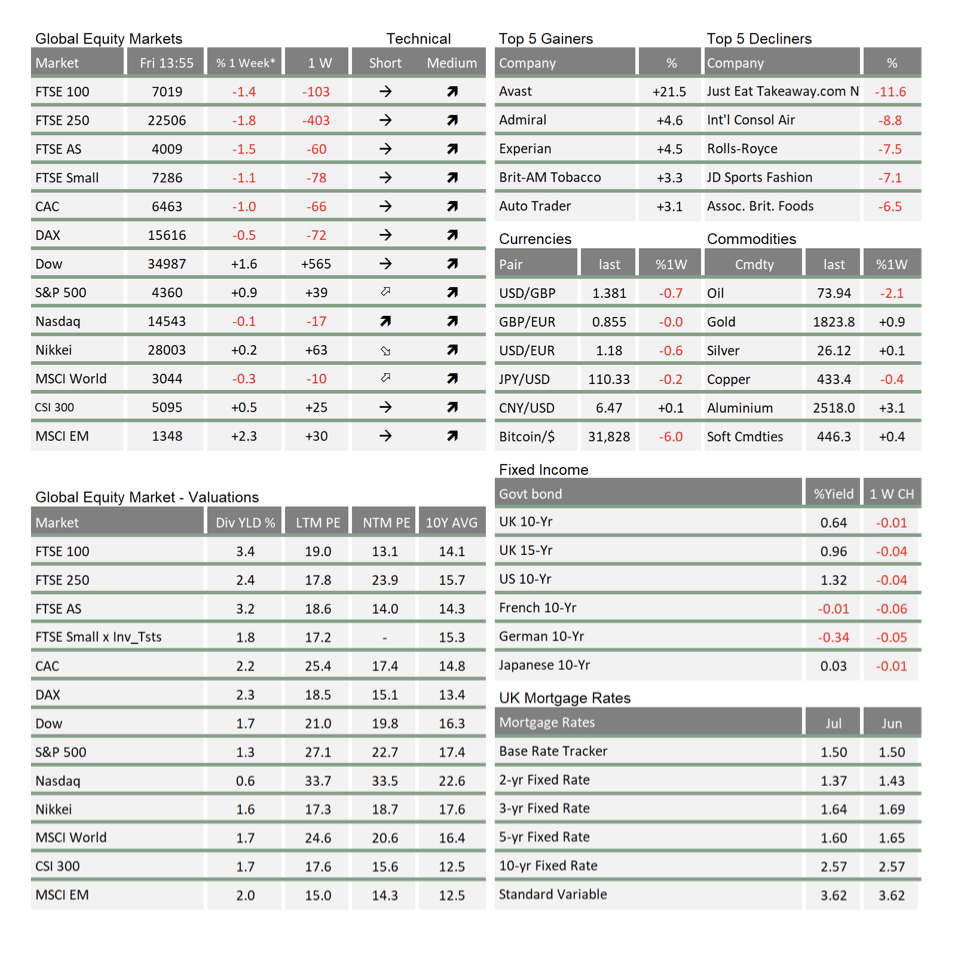