October has carried on where September left off, with quite a bit of daily up and down for markets, but with a slight downwards trend. For UK readers, the lack of positive vibe in stock markets is probably unsurprising, with petrol this week only slowly returning to being a commodity – rather than a scarcity… 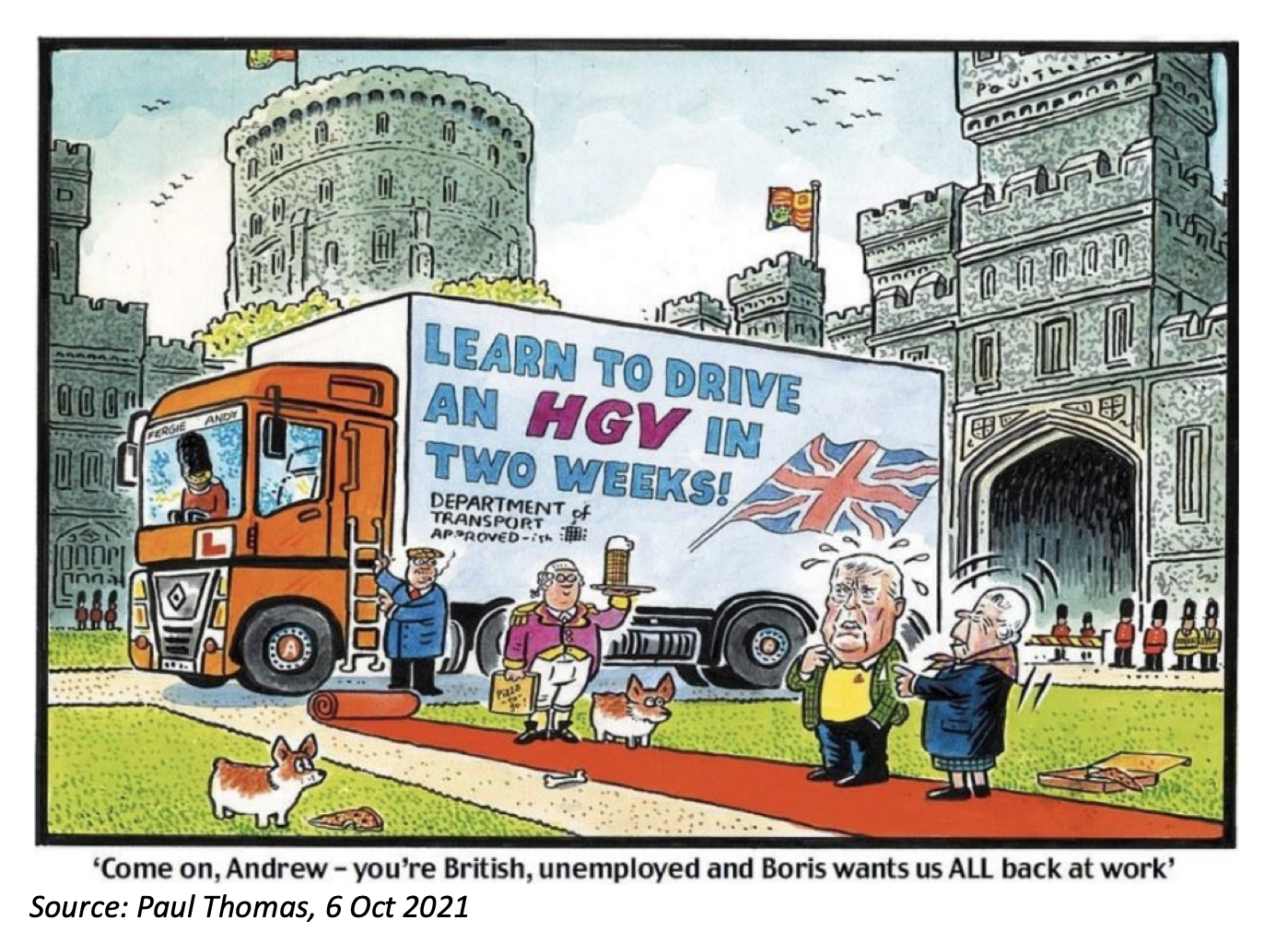 October has carried on where September left off, with quite a bit of daily up and down for markets, but with a slight downwards trend. For UK readers, the lack of positive vibe in stock markets is probably unsurprising, with petrol this week only slowly returning to being a commodity – rather than a scarcity – but with many staple goods still not as readily available as consumers expect them to be.

Overall though, during a week when European gas prices briefly hit a new record high, there was also the impression that this Autumn’s energy crisis sustained some equilibrium. On the one hand, Russia’s President Putin indicated that gas deliveries could be increased in a ‘quid pro quo’ for speeding up the administrative processes towards putting the completed Nord Stream 2 gas pipeline under the Baltic Sea into operation. On the other, for those keen observers, it was obvious that OPEC expects oil supply to outstrip demand again as early as January 2022 (left hand chart below). The market’s forward pricing curve of oil confirms this view by anticipating much reduced oil prices in the future, as the right-hand chart illustrates.

Some politic tensions were also eased further this week, although we are not referring to the jokes in Boris Johnson’s Conservative Party conference speech. In the US, the willingness of Congressional politicians to avert another imminent government shutdown – by agreeing to raise the debt ceiling until December – was greeted with relief, taken positively by the markets and perhaps interpreted as a sign for more conciliatory behaviours towards the end of the year. In Europe, German coalition negotiations progressed much faster than anticipated, with public opinion swinging decisively behind a so-called ‘traffic light’ coalition between the Social Democrats, The Free Liberals and the Greens. Even Italy is looking more optimistic about the future than usual, with prime minister Mario Draghi, winning increasing backing from the electorate for his strategy of structural reform, feathered by fiscal support, and facing little challenge from the rest of the European Union (EU) over his plans for increasing Italy’s deficit again. Bond yields continued to support this narrative of future growth, with a continued gradual rise of yields in the longer maturity brackets.

That said, the short-term outlook feels increasingly uninspiring. Today’s much-awaited US employment numbers failed to meet expectations (adding just 194,000 new jobs), even though the unemployment rate fell notably from 5.2% to 4.8%. Equity markets rose following the announcement, seemingly willing to ‘see the glass half-full’ in terms of not putting any more upward pressure on wages, which would in turn keep the US Federal Reserve (Fed) from tightening monetary conditions, as markets have been fearing since the beginning of September.

Fears of an imminent default of Chinese giant property developer Evergrande subsided over the week but were unhelpfully replaced by mounting military tensions surrounding Taiwan. China therefore remains on the ‘watch’ list, even though optimists will point out all this means more forthcoming fiscal and monetary support than recently projected.

So, given recent events, do we expect a swift return to the ‘Goldilocks’ upwards path investors enjoyed over the summer months? Sadly, not quite, even if our view that this cycle still has much time ahead has been reinforced. Compared to expectations early in the year, however, the second half of 2021 is not quite shaping up to see the cycle picking up speed again following the initial economic bounce-back. That means corporate earnings are unlikely to continue to expand as rapidly as expected, and with yields still rising in expectation of growth further down the line, this will keep the pressure on equity valuations.

We are, therefore, seeing less favourable conditions over the coming months in terms of broader market upside. Instead, we expect the rotational theme from earlier in the year to play out, with better investment returns available from rotating portfolios towards those styles and regions that have more upside potential during this particular phase of the cycle than the market at large. 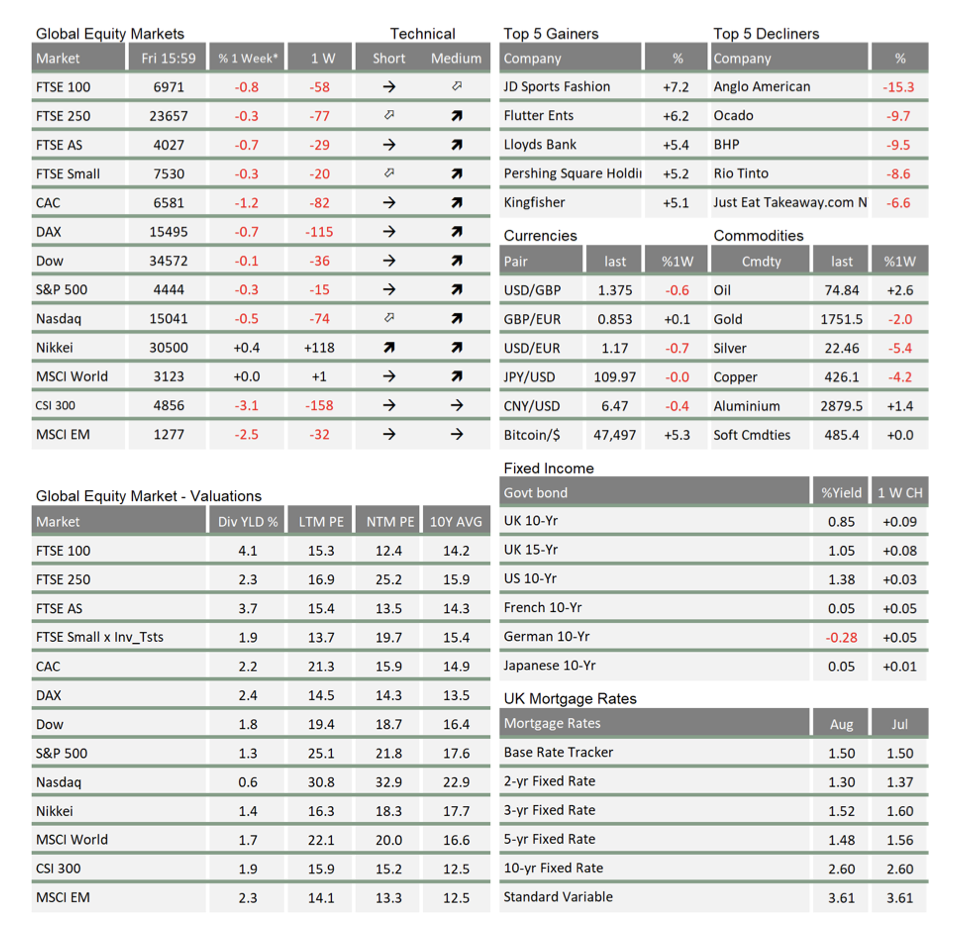