Capital markets continued over the week to recover just as gradually from the September/early October downdraft as they declined then. Many commentators put it down to the continued strong Q3 corporate earnings announcements, which with 20%-40% year on year growth between Europe and the US has indeed provided a positive for stretched equity valuations.

Capital markets continued over the week to recover just as gradually from the September/early October downdraft as they declined then. Many commentators put it down to the continued strong Q3 corporate earnings announcements, which with 20%-40% year on year growth between Europe and the US has indeed provided a positive for stretched equity valuations. On the other hand, less than 20% of companies have reported so far and as we have written here before, corporate results are the rear-view mirror of the economy, with only the outlook statements providing a bit of a glimpse of what may lie ahead.

Companies outlooks is perhaps where the currently unusual constellation of the economy begins to take shape and provide some evidence for the broader market thinking that the current economic woes will prove to be short-lived. So far companies have warned that supply constraints will hold their businesses back for a while yet, while at the same time stating that they expect demand to remain robust throughout, given the strength of consumers’ and companies’ post-pandemic financial position. This may also explain why their margins have until now not suffered under higher input prices, with demand strong enough to allow them to pass on input price rises through price rises on their own products.

The business sentiment barometer of the purchasing manager indices (PMIs) seem to paint a similar picture. They have hardly declined from their previously dizzying heights earlier in the year and in the case of the UK have even exceeded expectations, despite all the supply chain disruptions and labour shortages business have had to endure. Even more surprising perhaps is that this came against the backdrop of declining retail sales numbers over September.

Taking a step back is it perhaps that not only businesses but also consumers are indeed smarter than the central banks’ and the wider economists’ community factor in? Ordinarily, during inflationary periods consumers are tempted to make purchases sooner rather than later, given any deferring costs money. Despite all the clamour about inflation becoming engrained, this type of behaviour does nevertheless not seem to be taking hold (with the exception of car fuel in the UK perhaps but then there are other forces in play than price with car fuel). Whether this deferment of purchases is simply a result of a lack of availability or is based on the expectation of a return of lower prices down the road is not entirely clear. But what is clear is that the wider media has reported widely that there is an expectation that supply chain constraint will ease over the coming months).

Against this background, this week’s growing indications from the UK’s Bank of England that they are likely to raise rates sooner rather than later to quell any inflationary tendencies from becoming engrained sound even more counter intuitive. Andrew Bailey, the bank’s governor himself stated that interest rises are not the tool to ease supply shortage driven price rise pressures. What they do is reduce gushing demand that’s driven by cheap credit and the lack of return on savings. However, at this point, consumers appear to have already taken that step and deferred their demand, as the decline in retail sales tells us. Is Bailey’s “have to act” rhetoric to keep a lid on inflation aiming at preventing wage rises – and thereby in juxtaposition to the UK’s PM stated aim?. Well, given he has stated himself that there are only key worker specific upward pressures observable but that at large, real wage growth (after inflation) remains negative, there does not seem to be any urgency here either.

It is therefore perhaps not surprising that the wider economists’ community has decreed that a UK rate rise now would amount to a policy mistake of premature tightening. It would therefore not even support the argument of achieving lower import prices through a strengthening of £-Sterling, given currencies tend to fall when central bank errors are suspected to lead to weaker economic results. We have dedicated a separate article to the topic for more insight, but feel reminded by Bailey’s rate rise scare strategy of his previous station’s (the FCA) repeated use of the ‘putting the frighteners on’ approach to push it’s subjects in the direction they wanted them to go. We look forward to finding out whether the broader UK public will prove as subservient to the central bank’s whims under his leadership as the financial services sector had to by necessity to its regulator.

In other important news the Chinese government continued its de-escalation (or is it de-frightening?) course it entered last week when it removed the energy price cap for heavy industrial users. This week it enabled Evergrande to settle its overdue bond coupon payments before the 30 day grace period expired, thereby buying the company time until November to find buyers for valuable assets and continue on the course of what increasingly looks like an orderly wind down of the erstwhile second largest Chinese property developer (For more on the economic outlook of the world’s second largest economy in this week’s second article).

While the Chinese development clearly cheered markets up, the fast rise in COVID infections through the Delta variant in the UK and eastern European countries is doing the opposite. Talk of renewed restrictions from mask wearing to movements and public gatherings does feel as undesirable as the Halloween comparison cartoon at the top suggests. Yet there are valuable insights to be gained from this latest wave and how countries like the UK and Israel with high, early mass vaccination campaigns have fared. To this end a few more charts than usual in this week’s summary article:

The UK’s status of a highly vaccinate population appears to have broken the previous close link between infection numbers, subsequent hospitalisation and eventual fatalities. 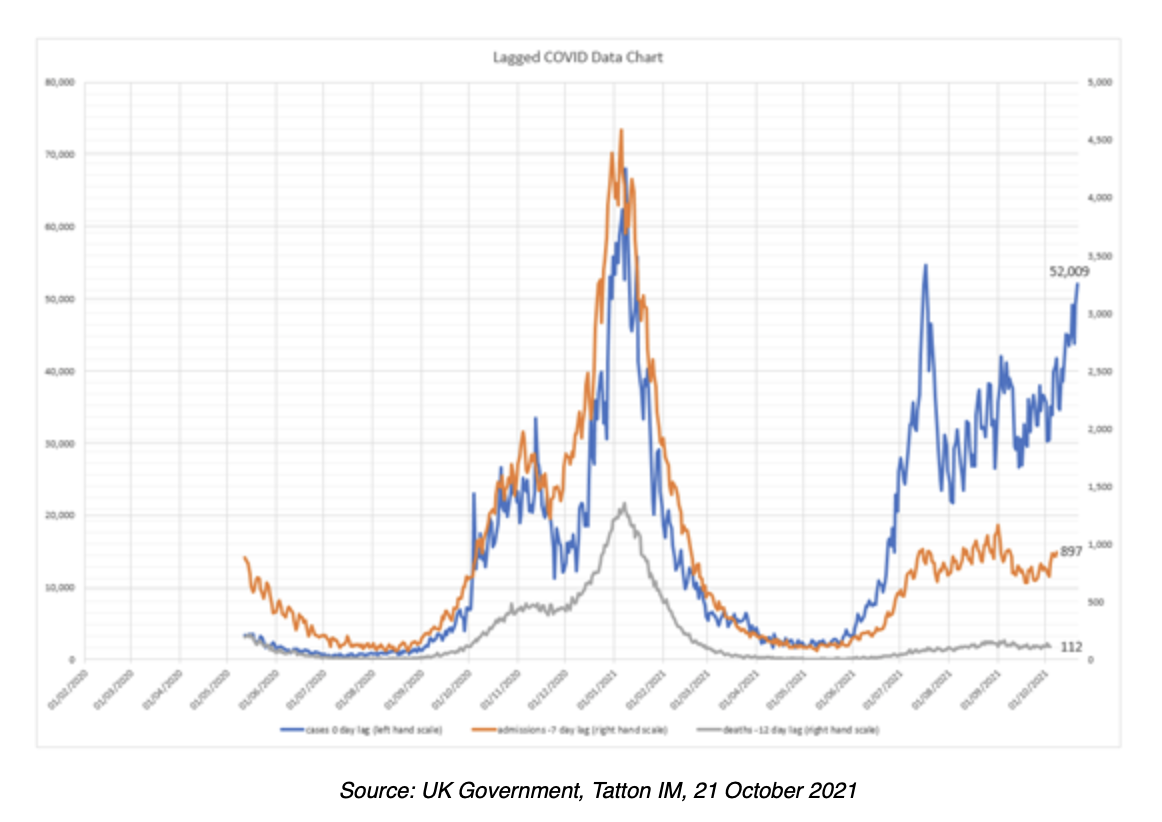 Israel, which was a good two months ahead of the UK with its mass vaccination campaign, shows how to bring a resurgence of infections as the UK is currently experiencing under control with a booster shot campaign.

Back in July/August Israel was – just like the UK now – the global leader in new infections (see left panel above). However, thanks to a decisive booster shot campaign (right hand panel), infection rates have now come right back down to being one of the lowest again (chart below). 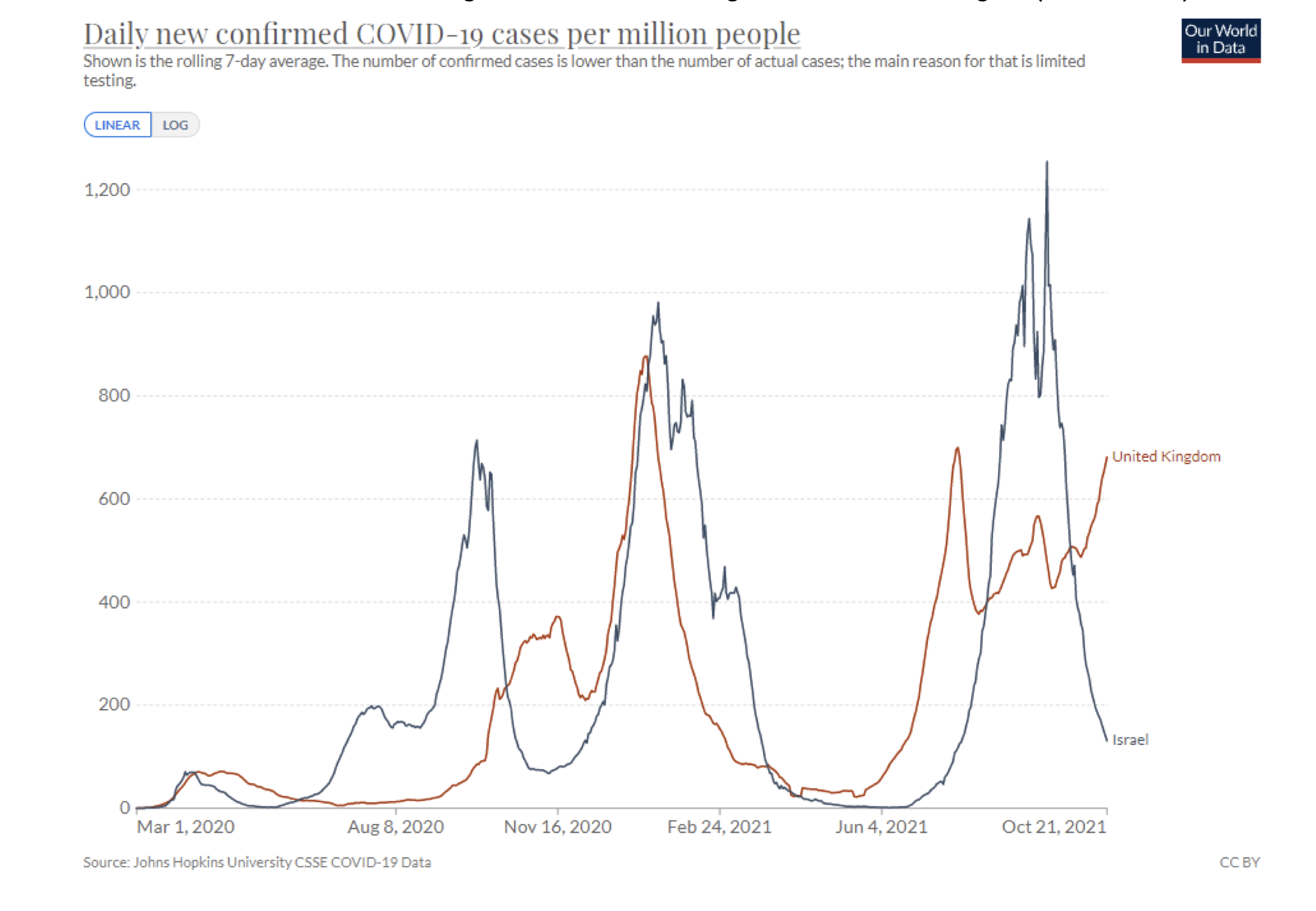 On the basis of these evidential insights, we remain confident that COVID related headwinds to the economy will continue to subside, even if further public health efforts will be required to achieve this.

P.S.: Yours truly had his booster shot two weeks ago and hopes you can get yours very soon too! 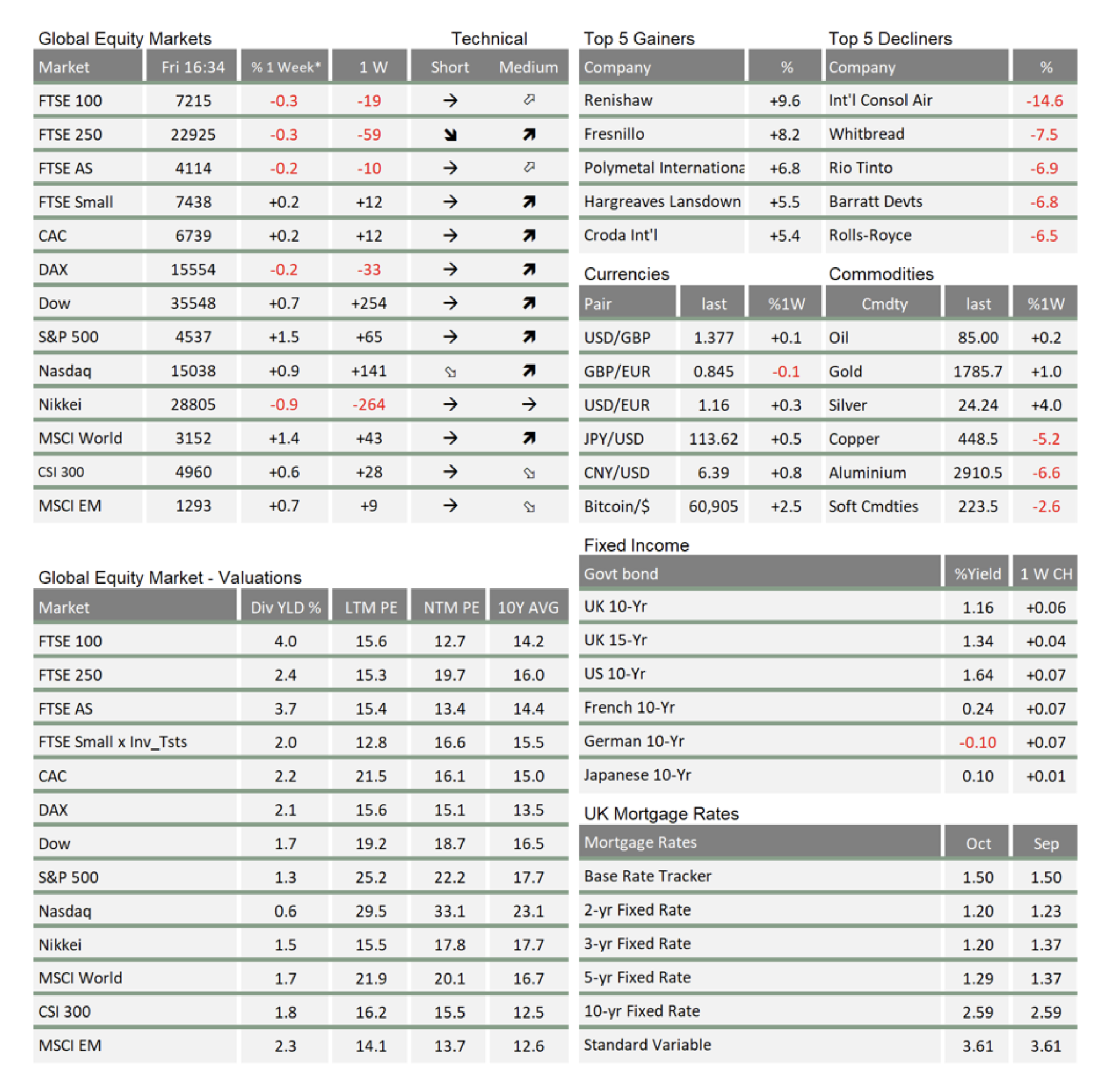