We are in the middle of the biggest inflation bout in years as ubiquitous post lockdown supply issues are sending prices skyward. A recent report from the Bank of International Settlements suggests that this inflation has become self-reinforcing; Bottlenecks have caused suppliers to build buffers at multiple stages of the chain, exacerbating supply problems that drive prices… 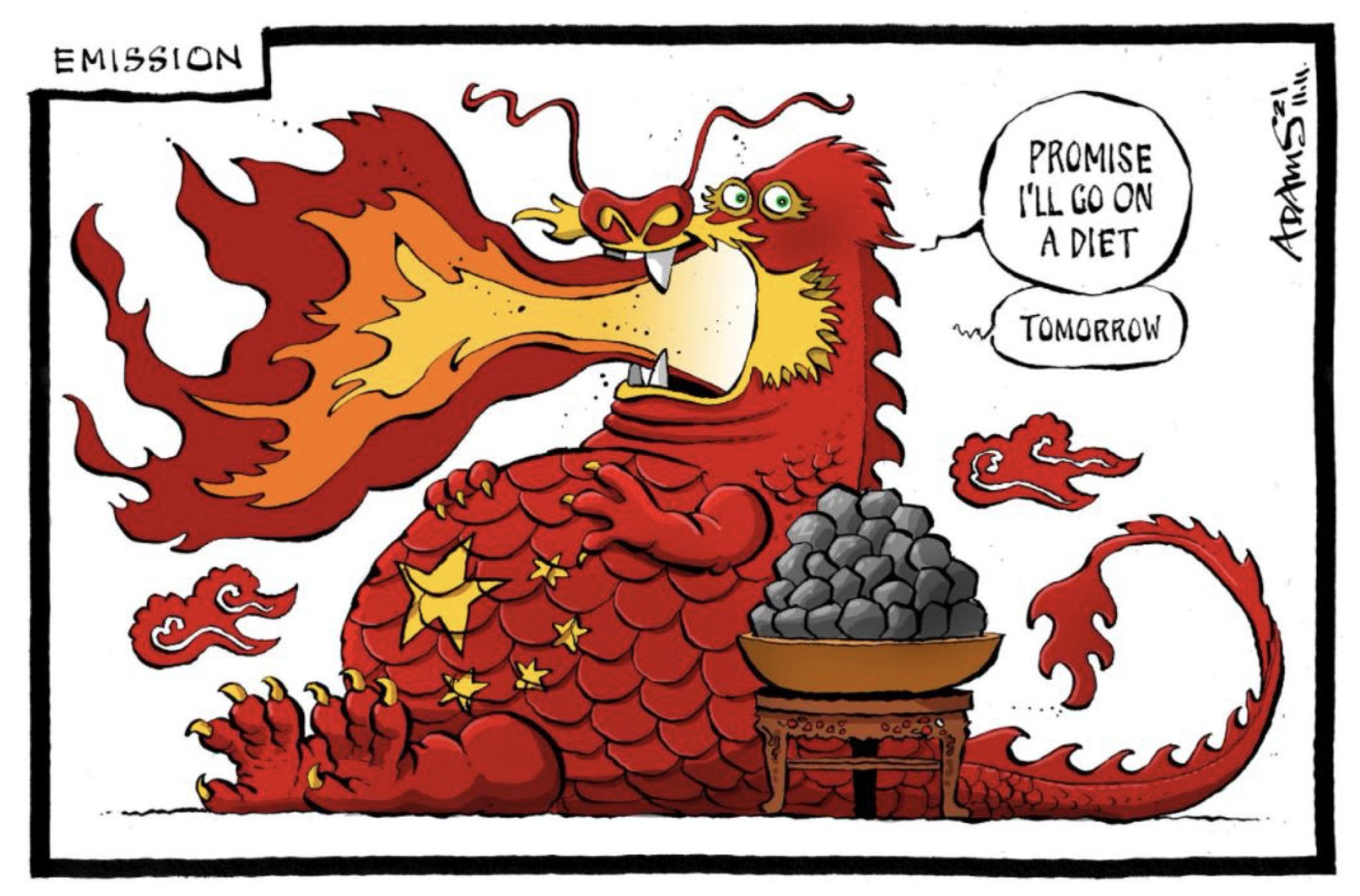 We are in the middle of the biggest inflation bout in years as ubiquitous post lockdown supply issues are sending prices skyward. A recent report from the Bank of International Settlements suggests that this inflation has become self-reinforcing; Bottlenecks have caused suppliers to build buffers at multiple stages of the chain, exacerbating supply problems that drive prices. And yet, monetary policy in the developed world seems as loose as it has ever been.

The US Federal Reserve has spent the last six months warning capital markets that the dreaded ‘taper’ – a reduction in the central bank’s asset purchases – was coming. Even now, it is only being implemented little by little, and the Fed is at pains to reassure everyone that rate rises are far away.

The Bank of England, which had been an outlier in its plans to raise interest rates, similarly backed away from a seemingly certain hike last week. Inflation is running ahead, but interest rates are not following it.

At this point, the ‘transitory’ argument is well-known. Supply issues are short-term as the global economy regains its footing, but their dampening effects on growth are likely to keep prices subdued beyond the next few months. The story gets a little harder to maintain each day inflation creeps upward, but central banks are holding steady for now.

As loose monetary policy is almost always a boon for markets, tightening policy is similarly a downer as the ‘taper tantrum’ of 2013 amply demonstrated. Strangely though, this week we saw signs of the opposite worry. Real yields (inflation-adjusted by subtracting market implied inflation expectations from nominal yield levels) for US Treasury bonds fell sharply this week, which is usually the result of increased demand for inflation linked bonds while there is less demand for conventional nominal bonds. This type of trading drives up inflation expectations as it shows markets have an increased belief in the risk of sustained inflation. As we have written before, real yields have been well below zero since the onset of the Covid crisis, but investors still seem eager to buy, so their money is protected against price rises.

The moves in real yields clearly indicate that the market expects more inflation. Often, higher inflation expectations canbe taken as a positive sign – indicating a strong growth outlook – but action in other segments of the bond markets suggest investors are more scared than excited. The US treasury curve has been flattening this week (see chart), indicating that markets have moderated their long-term growth expectations, and also discounted higher rates for the time period which is more directly influenced by policy action (2 to 5 yrs). If we take these signals at face-value, they imply a subdued economic view: rising inflation without structurally higher longer term growth. 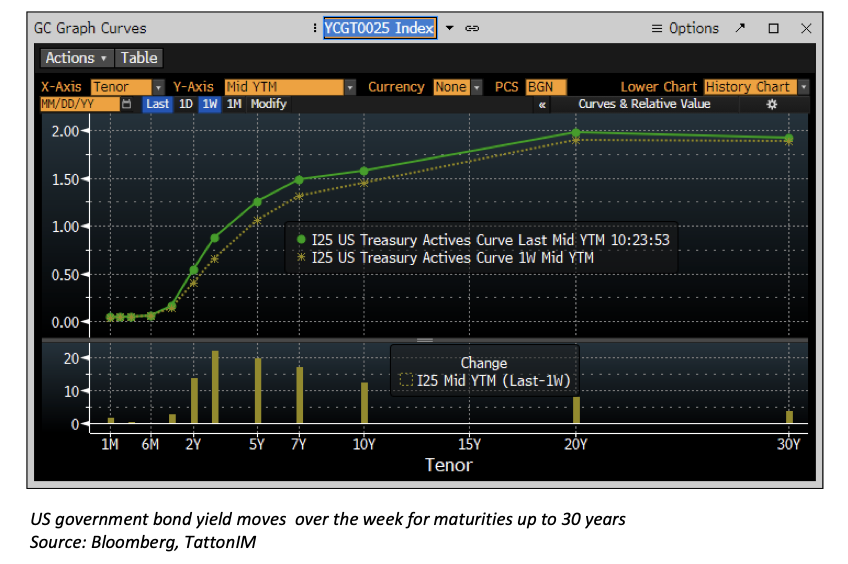 Persistent inflation would almost certainly cause central banks to raise rates faster than they would like. This is a worry for all, but particularly the Fed, which some believe has taken too long to tighten policy and could be forced into a catch-up next year. If that happens, it would be a lot to handle, making things difficult for capital markets and the real economy next year.

We have written before that concerns over ‘stagflation’, where growth slows but prices keep rising, are probably overdone. Market action this week suggests otherwise. Investors think inflation next year will be the bad kind, rather than the good, growth-positive kind. This makes life difficult for central bankers, not only do they need to support growth, they also need to convince markets that this support will not destabilise prices. If this happens, a Central Bank’s credibility could be questioned.

Only last week, it looked like the Fed were successfully managing this task. Policymakers announced they would start unwinding their asset purchases later in November with little to no complaints from bond markets – a great achievement considering previous tapering responses. The difficulty was always going to be reining in emergency pandemic support without disrupting the ongoing recovery by inadvertently signalling a definitive policy shift to outright monetary tightening – by convincing markets not to extrapolate the current tapering into future rate rises.

This is complicated, however, by the fact that investors are not really sure what the future holds for Fed policy. After years of deliberation, the Fed significantly shifted its policy framework last year to become more supportive of employment growth over inflation containment. This just so happened to coincide with one of the biggest economic crises in living memory – forcing policymakers to give substantial support. As the background framework is new, it is hard to tell which policies are emergency measures and which ones are part of the new normal.

This muddle is bound to cause issues. The current inflation scare in markets is likely one of them, but we could just as well see the opposite over the coming months: A small-scale taper tantrum that threatens wider equity markets. If markets sent confusing signals this week, it could be a result of their own confusion about the background environment.

We wrote last week that the Fed had managed a taper without the tantrum. A crucial caveat, though, is that this requires real yields to remain relatively stable to avoid a general re-pricing of risk across asset classes. A year ago, we predicted that maintaining low real yields would be a top priority for the Fed – which would therefore allow growth to feed back into a normalising economy.

Eventually, though, this has to change. When economic cycles mature, interest rates and real yields must creep up. When that time should come, is up for debate, but already the fears around this prospect have changed. The Fed would not have allowed real yields to rise substantially a year ago, but there is perception that policymakers could tolerate a bit more now.

Sinking real yields this week suggest concern that support has gone on too long. The worst-case scenario would be if inflation expectations persisted while poor growth signals were coming through. That would increase the already substantial pressure on the Fed and some timing inconsistencies could open up (but don’t have to). For now, our interpretation of the week’s bond moves could be entirely a false signal with other factors having caused the shift. As we say ‘one week does not make a trend change’ – but given how important bond yields are for equity valuations at the moment, we will observe closely how the Fed’s new framework copes and where yield level go over the coming weeks. 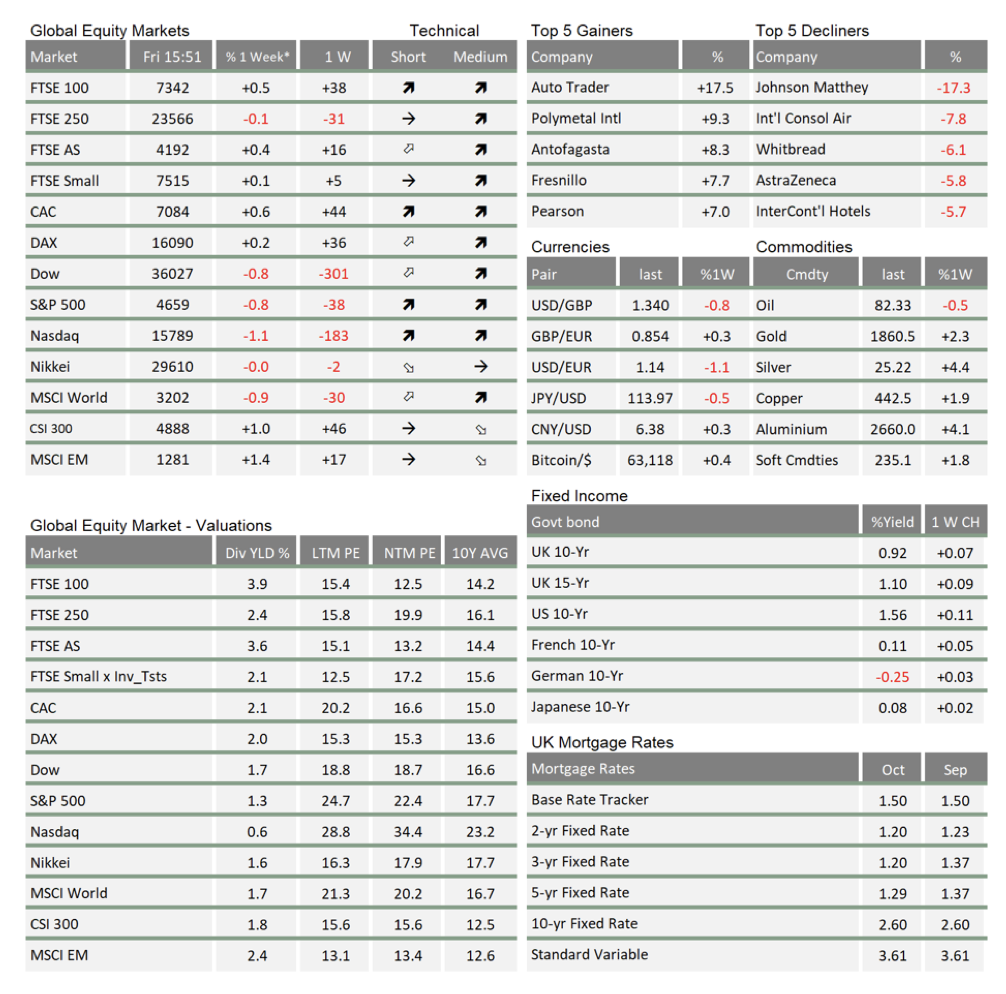