Markets’ summer holidays are over. Throughout August, risk assets made some impressive gains, while the global economy remained in its deepest ever recession. After equities were then catapulted to eye-watering valuation levels, the end of this week saw a sharp reversal. On Thursday, the US’ S&P 500 – which soared past its pre-pandemic highs in August’s rally – saw its biggest sell-off since June. 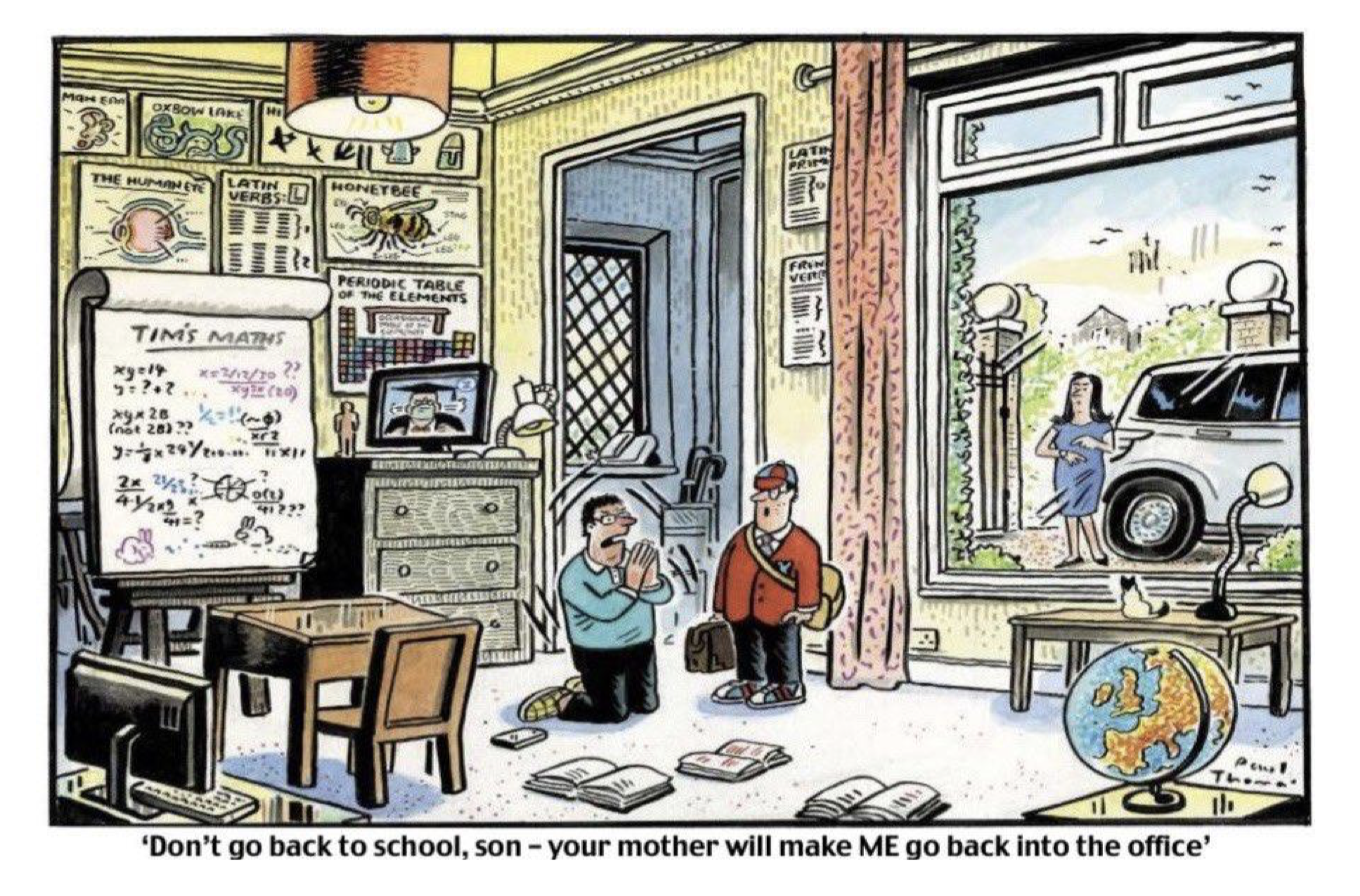 Markets’ summer holidays are over. Throughout August, risk assets made some impressive gains, while the global economy remained in its deepest ever recession. After equities were then catapulted to eye-watering valuation levels, the end of this week saw a sharp reversal. On Thursday, the US’ S&P 500 – which soared past its pre-pandemic highs in August’s rally – saw its biggest sell-off since June. Apple, which made history a few weeks ago by becoming the first company valued over $2tn, lost $219bn in midweek trading alone.

Nevertheless, the summer has seen plenty of sunny days for capital markets. In Sterling terms, all major stock market indices posted positive monthly returns, with the MSCI world index jumping 4% throughout the month. This takes global equities past their pre-crisis levels to a positive return year-to-date. Bond yields jumped higher – and thereby drove down bond valuations – after the Federal Reserve’s announcement last week that it would end its strict 2% inflation target in favour of a symmetrical average inflation target – allowing inflation to run hot in the short-term. Oil prices rose on the back of increased global demand, while safe-haven assets like gold sold-off from its impressive year-to-date run – both positives for economic and risk sentiment.

On a regional level, Japanese equities were the best of the bunch, with Japan’s broad Nikkei 225 index registering a 5.5% gain on the month. Emerging market equities lagged at the other end, climbing just 0.2% through August. This makes for a mirror image of July, when EMs outperformed and Japan slumped. 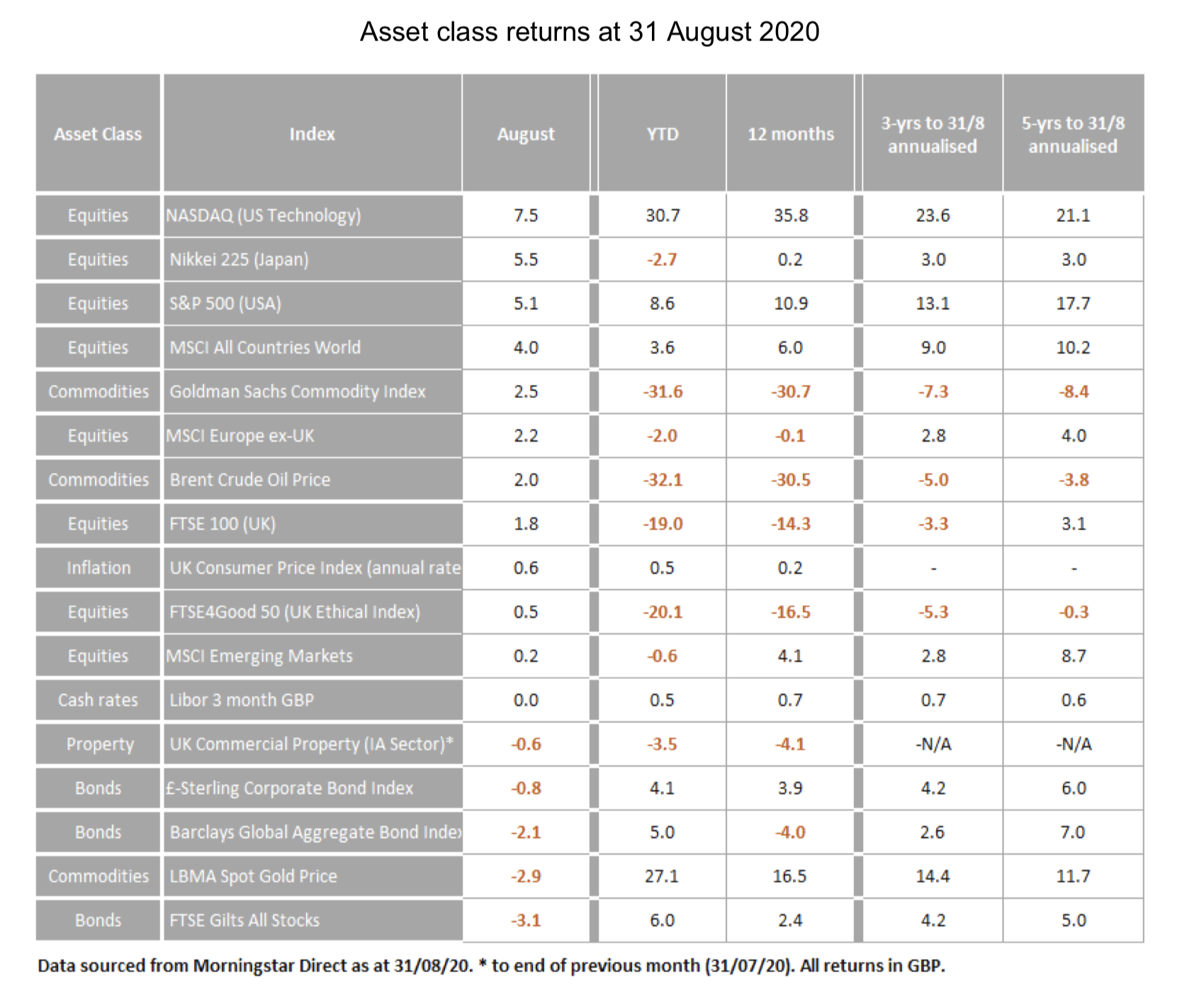 Although the S&P 500 followed Japan closely with a 5.1% monthly return in sterling terms, this overall figure hides the huge divergence between US sectors. The NASDAQ – which is much more heavily weighted towards the American tech sector – climbed 7.5%, becoming August’s best performing sector. Incredibly, that takes the NASDAQ’s year-to-date return over 30%. The incredible performance of the US’ mega-cap tech companies – and how concentrated the market rally has been on them – has led to some investors getting vertigo, worrying about climbing valuations as hitherto healthy underpinning earnings are proportionally becoming ever smaller relative to share prices. This fear could well have been a part of Thursday’s sell-off.

In fact, the distance between America’s haves and have-nots becomes even more stark when comparing sectors on a regional basis. US equities, as a whole, have outperformed their global peers over the last three months. But at the sector level, non-US markets have outperformed their US counterparts in 8 out of the 11 major sectors. For the tech superstars and the consumer discretionary sector, the US is looking good. Not so much for everyone else.

This is an unhealthy sign. Much has been made of the supposed ‘K-shaped’ recovery we are seeing in stock markets, where the winners recover quickly from the economic crisis and the losers languish at their lows for much longer. We certainly see signs of this in the US market – and it does not bode well for overall stability.

The US still leads the world for now, but the underperformance of large sections of the American economy – combined with weakness in the US dollar – could be a sign that investors are starting to look elsewhere. For that rotation to happen, the dominance of US tech would need to end. But while this week’s sell-off has pulled the superstars back, pronouncements on their fate are premature. The tech sector’s current run has drawn unfavourable comparisons to the dotcom bubble in terms of overvaluation, but there are crucial differences. Even if current big tech companies are overvalued, their underlying popularity is based on impressively strong and stable profits – unlike the overbought start-ups with non-existent revenues 20 years ago.

None of this is to say that the rally in growth and big tech stocks will go on, of course.

For us, the key thing to watch will be what happens on the monetary policy front. Throughout the pandemic, the world’s central banks have supported the financial system through historically large liquidity injections. This has benefitted risk markets – as the non-existent yields on risk-free assets have made it a question of “where should I invest?” rather than “should I invest?”. But over the last month, the pace of these liquidity injections has slowed (covered more in a separate article). If this continues – while the global economy still languishes – it is hard to see how the positivity in markets could be supported.

We suspected that this drop in the pace of central bank asset purchases would lead to choppy markets in August. As it turned out, the summer holidays proved calm and quiet. But market volatility could well come in September instead, and central banks’ liquidity provision will be a key indicator to watch for that.

For now, the break in US tech’s relentless rally actually comes as something of a relief. Given some early signs of a cyclical recovery – especially in Europe – a volatile September could be the precursor to a rotation away from US large tech, the market’s current and seemingly only investment darling.

Overall, risk markets would be well supported if the ‘liquidity trade’ continues. Central bank and government support measures are easy to gauge: it is much harder to work out the consequences of the public health impact of the virus, and how we behave relative to this threat. Europe – including the UK – is without doubt now in the midst of a second wave, with the rate of infections in France and Spain now registering higher numbers than at the height of the pandemic back in April. Yet fatalities associated with COVID-19 have only marginally risen, compared to the lows of infections in the early days of July.

While governments have supported national health systems across Europe to be ready for a return of April’s misery and tragic, they have repeatedly stated that they are not planning on a return of nationwide economic activity lockdowns – most probably because the minimal impact on public health does not justify such a step. So, if the current state of the virus and/or our ability to deal with the illness continues to limit the wider health impact to what currently looks no more than a mild summer flu then it will be down to societies’ changing behavioural response to the virus threat that will determine whether the economy will continue to rebound as strongly as it has over the summer, stall, or revert back to decline.

So September will be an even more crucial month than August. If the gradual return of children to classrooms and workers to offices that has taken place across Europe continues and takes hold in the UK as well, then the economy will continue to recover. If fear returns, then economic prospects will be much harder to foresee and so will the corporate earnings recovery. We believe that the positive scenario carries a higher probability than the fear scenario, but it is entirely possible that over the coming weeks, stock markets will be buffeted between these two opposing economic prospects. The roller coaster stock markets we experienced over the past week may therefore become much more frequent than it has over the summer months. 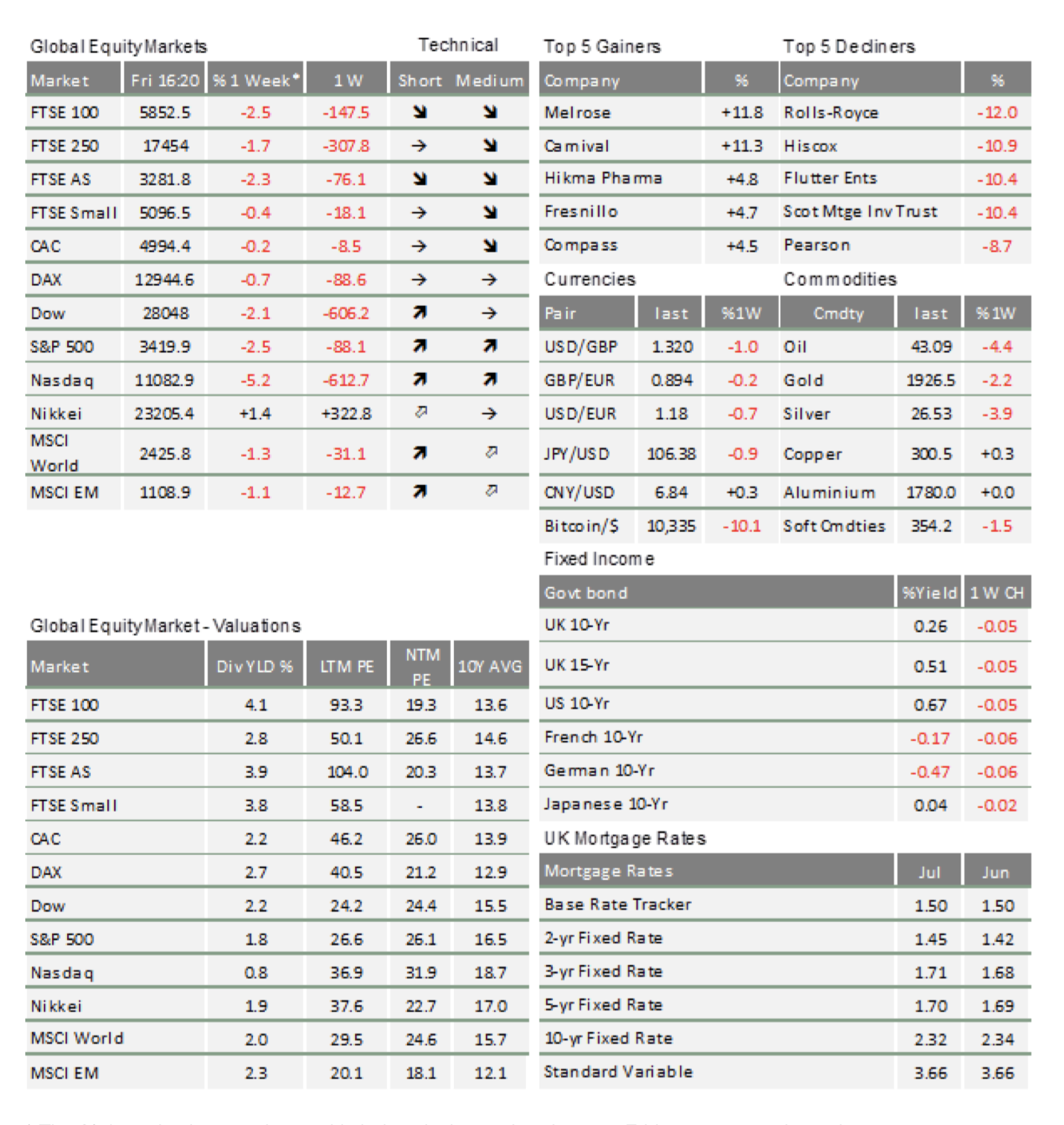